Every July, Food Network Canada asks chefs across Canada to compete for prize money and kudos on their hit show Top Chef Canada.

Joanna Notkin, who runs the Zoe Ford catering service in Montreal, devoured every episode during its first seven seasons. She never imagined she’d be among the contestants until she applied on a whim last year.

Her selection as one of a dozen competitors set her on a journey that led to more confidence, a better understanding of resilience, and a new idea that enabled her to keep her business alive during a global pandemic.

“I think I went on the show to prove something, particularly because I’m not trained. I’m self employed. I employ people. I don’t have that much interaction with other chefs on a day-to-day basis. I just do my thing in my own little bubble. So there were a lot of questions for me. This is a third career, and I just didn’t know where I ranked in terms of capability. I think what I got out of the show is the understanding that I can do so much. You see what you can do under pressure, and it really shifts your consciousness about your ability.”

“I would tell myself in the beginning
you can cry for like five minutes a day,
and then you’ve got to move on.”
….Joanna Notkin aka Zoe Ford

Notkin’s career as a caterer began in 2009 when she started the Zoe Ford company. The name honours her grandmother, who took on the moniker to hide her Jewish identity. 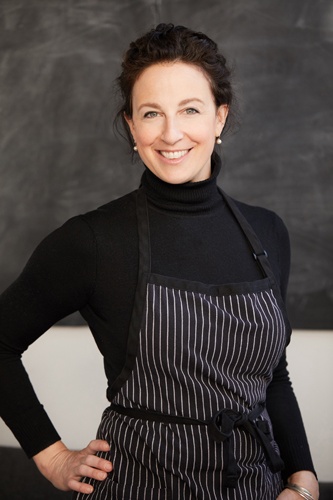 “My grandmother was an unbelievable homemaker and cook,” said Notkin. “At a time when other mothers and grandmothers were cooking a certain type of food, my grandmother’s cooking French food. She was a disciple of Julia Child. Everything was just so. The china was just so. The silver was placed properly. Every bit of it was perfect. We used to call her house the cookie farm because you’d go and at any given time, there’d be like a multitude of cookies to choose from.”

Until the pandemic, the company specialized in 100 to 300-person cocktail parties, corporate networking events, baby showers, engagements, and birthday parties. Notkin had to take a week off for Top Chef Canada.

She met the other contestants in Toronto last autumn. Together, they participated in a series of cooking challenges. In each, chefs had to demonstrate an ability to create delicious flavours out of unusual ingredients. Judges tasted each dish, eliminating contestants until the last chef became the winner.

The grab and go challenge remains her best memory. She served her jewel box brownies to one of her chef idols, Joanne Chang, a James Beard award-winning pastry chef from Boston.

Eventually, that moment would lead to a future business success, but not right away.

For six months after the taping, Notkin and the other participants had to keep competition results to themselves. Notkin catered Christmas and New Years events while trying to figure out how to promote her business when the show aired.

Then, a global pandemic hit and all Notkin’s events had to be cancelled.

Inspiration from her grandmother allowed Notkin to keep Zoe Ford moving, despite having to cut out the events that used to pay her bills. As other restaurant owners took time off, Notkin got to work creating virtual cooking classes. She’s since attracted a thousand students and credits Top Chef Canada with giving her the resilience she needed to keep operating.

“I would tell myself in the beginning ‘you can cry for like five minutes a day, and then you’ve got to move on.’  A lot of restaurants were feeling like we’ll wait and see what happens. I just felt like there’s no point in waiting. A lot is going to be different for a long time. You can’t really lament what you can no longer do. You just sort of have to move forward. I think that is something I learned from the show.” 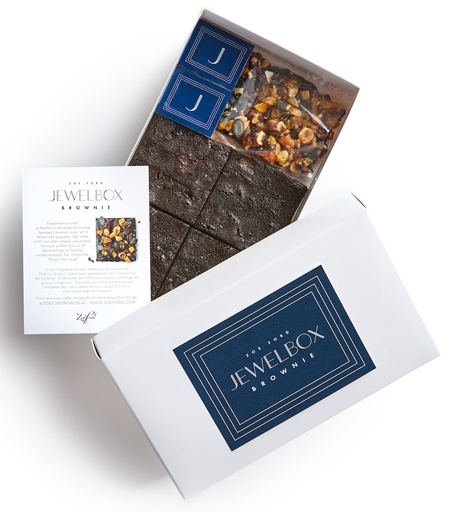 We started shipping across Canada and once the show was on, it just sort of took off.

Notkin also decided to deliver her jewel box brownies to addresses across Canada. She also offers cookie, cake and scone mixes that people can use to create their own tasty baked goods at home.

Then, as things opened up a bit, she created a deli service to create food for Montrealers who want to pick it up or have it delivered anywhere in Montreal. The deli service features breads, chicken, salmon, salads, dips and snack boxes. Customers order by Tuesday night and then pick up food on Friday or receive deliveries on Saturday.

Meanwhile, the Top Chef Canada series aired every week, giving Notkin, her newly-found chef friends from across the country, and Montreal foodies a chance to celebrate together from home.

“None of us could be together at parties, dinners or restaurants. The show really brought people together because all everybody was talking about or thinking about was Monday night. I gotta get my work done. The kids are gonna make popcorn. I felt like it saved a lot of us who still wanted to be in this food world as we were isolated. In a way, it was just a magical time for it to happen.”

Notkin says that she’ll be forever grateful to everything she learned in her reality show experience. Those new skills helped her pivot her operations and keep operating despite the shutdown. She’s committed to the new direction going forward. Right now, she’s working on adding another ten baking mixes to her pantry service for the holiday season.

If you’re tempted to undergo a similar transition, keep on eye on the Top Chef Canada page for their next casting call.