Jazz vocalist Deelee Dubé will deliver an exclusive set from her home as part of the Royal Albert Home sessions. 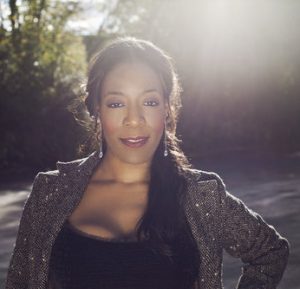 Embodying a stellar African musical lineage, the eclectic tastes of a London upbringing and a deep love and respect for the jazz tradition, Deelee possesses what Jazz Times called “a warm tone, genuine blues feeling and easy rhythmic authority”. In 2016 she was the first and only winner of the Sarah Vaughan International Jazz Vocal Competition in Newark, NJ.

Deelee was brought up with music all around her, and formed her first band at the age of 14. She attended the BRIT School for arts and music, and received formal voice sessions under Anton Browne later studying as a music undergraduate at South Bank University and Morley College with vocalist Clare Foster, and forming the first of many musical relationships with jazz pianist Roland Perrin. She has also received the private tutelage of Jazz vocalist and teacher Rachel Gould and tenor saxophonist Renato D’Aiello.

Highlights from 2017/2018 include a brief tour of North America and a successful debut performance at the Montreal Jazz Festival. In 2018 Deelee also performed as part of the Royal Albert Hall’s 150th Anniversary series ‘Celebrating Women and the Hall’.

A songwriter, poet and singer, Dubé is a regular performer at Ronnie Scott’s, and made her Royal Albert Hall debut as part of the Late Night Jazz season in 2016. We are delighted to present her once again through this online series.