Vincenzo Guzzo started working in his father’s movie theatre when he was a child, doing everything from sweeping the floors to selling tickets. After school, he would go to Angelo Guzzo’s movie theatre and complete his homework in his father’s office, before doing whatever needed to be done in the theatre. After obtaining degrees in business and law, he assumed greater responsibility within the company and eventually became President. Vincenzo Guzzo has a no-nonsense management style that also includes logical thinking. He has built the modest chain of theatres started by his father into the largest cinema network in Quebec and the third largest in Canada. He was welcomed onto CBC’s hit show Dragon’s Den in 2018, and has continued with the show into its 14th season. 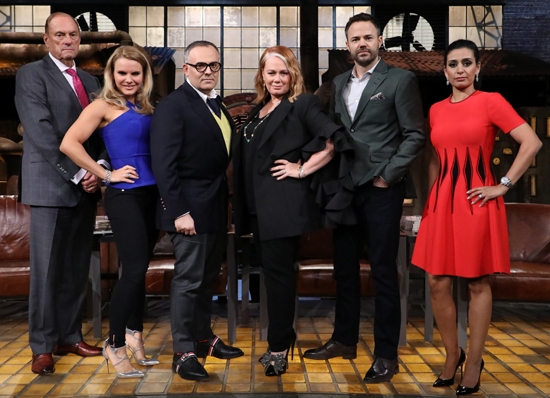 “We film the show in twenty continuous days, and we spend most of our waking hours with the other Dragons. It’s been a fun experience for me. We’re competitive, and that can create some tension – but that’s part of reality television.” Continuing, Vince states; “Jim Treliving is a stabilizing presence on the set – he’s almost like a Dad down there at the far end of the row.”

“Dragon’s Den shows how varied Canadian entrepreneurs are, how they reflect the cultural and regional values; and how diverse we are as a country. It also shows how innovative we are in Canada. We have so many multicultural candidates on the show that it eliminates any doubt about how immigrants contribute to our country. I think it’s the only true culturally diverse show on television.”

“I’ve learned that women have just as strong an entrepreneurial spirit as men.”

“The candidates are trying to make themselves better – to improve their situation in life. Most are nervous because it’s their first time on television, and of course the stakes are high for them. Plus – it’s a little hard to impress us – and it’s intimidating with us sitting up on the dais.”

Fluently bilingual, Vince Guzzo went to primary school in French before attending an exclusive English-language private school in Montreal before attending a French CEGEP. He then went to the University of Western Ontario and earned a degree in business administration. He then returned to Montreal and studied law at the University of Quebec at Montreal (UQAM). Both disciplines have been immensely useful as he planned and then executed his plan to expand Cinemas Guzzo into the mega-business that is today.

In order to compete effectively in the movie business, Guzzo Cinemas had to have access to first-run films. Vincenzo realized that he’d have to break into the monopoly of the large theatre chains. He took them to court in 1998 and won his case, enabling Cinemas Guzzo and potentially other independent theatres to offer first-run movies and thereby expand their businesses. In just twenty-plus years, Cinemas Guzzo has maintained a dizzying expansion to 141 screens and 9 IMAX theatres, with more are in the works.

After watching Dragon’s Den for twelve years, Vincenzo Guzzo joined “The Den” in 2018

This is where the Vincenzo Guzzo story gets even more interesting. In order to build more theatres, Vincenzo reasoned that if he established his own construction company, he could save considerably on the up-front building costs; keeping the profits in-house. When not building multiplex theatres, Le Groupe Guzzo Construction Inc. could and would bid on other projects.

Part of the movie experience is a visit to the concession stands before taking your seats inside the theatre. Guzzo’s experience in the limited menu food business led him to establish a chain of restaurants called Porchetta, offering Italian pork sandwiches in the Guzzo Hospitality division.

Vince and his wife Maria are active philanthropists, supporting cancer research, mental health initiatives and a scholarship fund for less affluent promising athletes and students to at least complete high school.  The Guzzo Family Foundation supports cancer nanotechnology research conducted at the Jewish General Hospital and McGill University. The family foundation also supports a Research Chair at the Université de Montréal. The couple has also supported the Shriners Hospital with the purchase of an imaging unit, vitally important to the Shriners treatment of children.

In 2013, Maria and Vince broadened the scope of their philanthropy to include support for Mental Health initiatives. Maria stated; “As parents of five children, our priority is their well-being. This is why we would like to help improve the lives of as many young people as possible who may be affected by mental-health issues. We would like to do this by providing funding for the increase and availability of preventative measures, in hopes of reducing the cases of untreated mental illness in youth. Let’s raise children with the necessary tools to curb the effects of a difficult childhood.”

The Guzzos host Notte In Bianco, the annual fundraiser to provide mental health research funds for the Jewish General Hospital and McGill University. It’s an event that is a snapshot of Montreal’s elite, but more importantly – it raises awareness of the need to support the often invisible disease of mental illness. Experts estimate that two in five children struggle with mental health related issues. An important aspect of the mental illness program is to encourage children’s literacy.

Funds are distributed primarily to the non-profit organization, the Kids Write Network (KWN) that offers an innovative intervention based on a narrative and therapeutic process involving five stages. This narrative intervention aims to get children to write books for other children while sharing their experiences through the exploration of life lessons.

Vincenzo Guzzo is a restless man – and he plans to continue building his various businesses, including the nascent Guzzo Medical Services. And while he’s creating jobs and generating profits, he and Maria continue to give back to many Montreal communities.