Il Divo announce their newest tour, A Holiday Song Celebration, which will visit intimate North American venues this fall. The quartet is set to perform a distinct holiday spectacular unlike anything their fans have seen before.

Il Divo will perform songs from The Christmas Collection, their compilation of merry classics that was certified Platinum by the RIAA. The audience can expect to hear memorable interpretations of familiar Christmas melodies for a heart-warming start to the festive season. 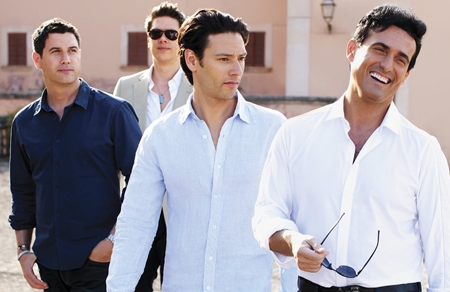 Il Divo has always stood out for its peculiar mix of opera and pop in songs of different genres, and is the most important reference in the world of the crossover groups of classical music. Since its debut in 2004, IL Divo has triumphed on the most important venues around the world, and has sold over 30 million records throughout its career.

First discovered and mentored by Simon Cowell in 2003, the group composed by the Spanish Carlos Marin (baritone), the Swiss Urs Buhler (tenor), the Frenchman Sebastien Izambard (tenor) and the American David Miller (tenor), became a pioneer of a musical genre unknown until that time when in 2004 they released their debut album “IL Divo”.

Since then, the international four-member group has become the world leader in its genre, and has achieved a second to none success around the world, performing before personalities like as former US presidents George Bush, Bill Clinton and Barack Obama, and the Queen of England.