Centaur Theatre opens its fiftieth season in October – a significant accomplishment for any business, let alone an English-language theatre company that lost four hundred thousand-plus members of its prime audience community during a thirty year period of its history. The fact that Centaur has continued to thrive and achieve legendary status on a national and international scale is a compliment to Montreal audiences, theatre patrons (individual and corporate) and above all – the dedicated and talented people who all share a passion to present live theatre to their fellow citizens. 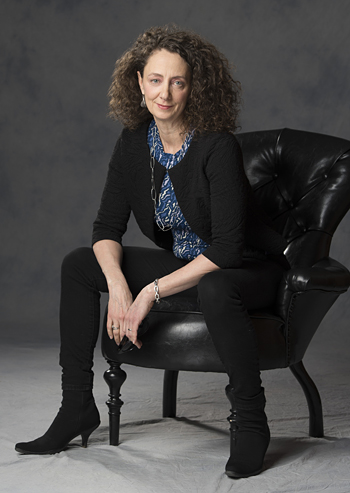 Only four people have served as Artistic Directors of Centaur Theatre Company during the past 50 years. Eda Holmes is just the fourth person to hold the dual responsibilities of Executive Director and Artistic Director. She brings a deep knowledge of theatre from her work history, most recently as the Associate Director at the immensely successful Shaw Festival. Eda also has sensitivity for the actors’ side of live theatre, having had a successful career as a ballet dancer. She knows what it’s like to be on a stage, with the audience just a few feet away and expecting a fine performance.

“Centaur has an illustrious history, and it’s exciting, inspiring and important. I consider it to be Montreal’s theatre, because it cuts across language, class and cultures. Montreal is a city that offers such hope with its diversity. We can be a model.”

“In addition to Centaur’s illustrious history, we have a great location in Old Montreal, a diverse public and we are full of opportunity. I want it to be ‘everyman’s theatre’ not just for the elite; although they are certainly part of our theatre community. I’d like to see students, actors and business people all milling around here before and after a performance.”

Let’s go back to the beginning…

In 1969, there was a theatre company in Old Montreal that couldn’t afford seats. They borrowed chairs from a restaurant across the street that served only breakfast and lunch – nobody came to Old Montreal for dinner. The chairs had to be returned after the performance in time for breakfast the next morning. In a building previously occupied by the Montreal Stock Exchange on rue St. Francois-Xavier in Old Montreal, Centaur Theatre continued to develop, to expand, to entertain and to challenge theatre audiences. The theatre not only survived – it has flourished.

The company’s status in the Canadian theatre community grew to legendary proportions, and the top job was and is still a dream job for Artistic Directors across Canada. The company will celebrate its 50th Anniversary Season in the same building where it all started in 1969.

The beginnings of Centaur were humble, dependant on an unusual set of circumstances, and fraught with precarious finances. But there was a dream – perhaps a mission – to bring outstanding plays to life for Montreal audiences. While he may not have recognized it at the time, Maurice Podbrey would play a magnificent role in creating a home for English theatre in Montreal.

Maurice Podbrey was living in London and was struggling to make ends meet. Bill Davis (Cancer-man in the X-Files TV series) was in charge of the National Theatre School in Montreal. He offered a teaching job to Maurice; who jumped at the chance to make a decent living in theatre. He arrived in 1966 and rented a loft in Old Montreal in order to be close to the school. In wandering through the neighbourhood, Podbrey learned that there was a theatre in the boarded up building that once had been the Montreal Stock Exchange.

Maurice integrated himself into the Montreal artistic community, and was soon asked to take over Instant Theatre, a company that produced lunchtime theatre at Place Ville Marie. He did so with the proviso that he would be able to organize the company to produce plays for a legitimate evening theatre. And he had just the location in mind…

Maurice had come into contact with Herbert Auerbach, who was the developer of Place Ville Marie, Place Bonaventure and a patron of the performing arts. Auerbach became the first President and Founding Chairman of the Centaur Foundation for the performing Arts.

Another theatre company had previously attempted to transform the Stock Exchange building into a performing arts centre – but had failed. They had managed to build a 220 seat theatre in the space we now know as Centaur 1. The theatre was complete, except that the seating company had taken their seats back when unable to obtain payment. In 1969 the first season was unveiled, tickets were sold, and the nightly exchange of chairs with the restaurant began. Maurice secured the Canadian premiere for The Prime of Miss Jean Brodie in their first season, and the fledging company gained recognition and reputation. 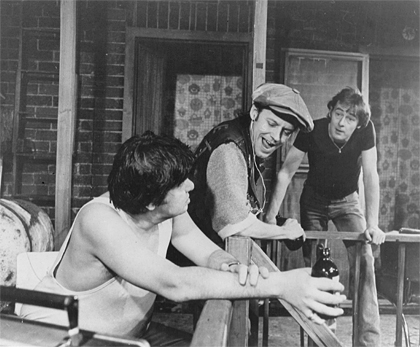 Maurice Podbrey would stay on as Artistic and Executive Director for an incredible 29 years, building the company’s reputation and its audiences. By 1974 the company was able to purchase the venerable old building with the trademark Greek columns and invest $1.3 million in renovations, including the construction of a second and larger theatre with seating for 440, now known as Centaur 2.

Chuck Childs, who has been with Centaur for over 40 years (as General Manager for the last 30) had this comment; “Maurice had a driving vision of what he believed we could do as a theatre company, and he was supportive about giving a voice to guys like David Fennario and Vittorio Rossi and Steve Galluccio to tell Montreal stories.”

“I came to Centaur in season ten as Production Manager. It was the season that we premiered David Fennario’s Balconville, which was a huge critical and financial success. We took Balconville across Canada and to Europe.” Many of David Fennario’s plays had their World Premiere at Centaur, including: On The Job (1975), Nothing To Lose (1976), Toronto (1978), Moving (1983), The Death of René Lévesque (1990), Balconville (1979 and 1992), Condoville (2005) and Motherhouse (2014).

Chuck has a clear understanding of Montreal society and the role theatre plays in reflecting that reality. “There’s no other city with Montreal’s two language and cultural groups, plus all the other cultural communities. Our ‘art’ being theatre is language based, and we play a role in representing our community. We see the world from a dual perspective – in part as a minority within Quebec – and also from a global perspective.”

The real and symbolic importance of the theatre was evidenced by former Premier Lucien Bouchard’s decision to address the English community following the divisive 1995 referendum at Centaur.

Chuck continues; “One of the reasons that I’ve stayed on for 40 years is that we do a lot of important work. We have the opportunity to do something that makes a difference – from bringing people down to Old Montreal to enlightening audiences with engaging productions. The people here make it a pleasure to come to work every day. We never have enough resources – but we work together and get the job done and the show on the stage.” 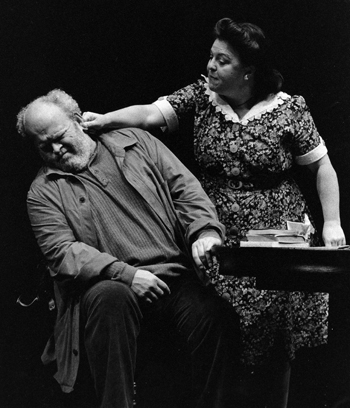 Maurice Podbrey retired in 1997, and fortunately he gave a two year notice. “We had never hired an Artistic Director” noted GM Childs. “We didn’t even have a procedure, and it took us a year to define our criteria and develop a hiring procedure.”

“Centaur Theatre was arguably one of the most important theatres in Canada, headed by the legendary Maurice Podbrey”, stated former Artistic and Executive Director, Gordon McCall. “When the job came open, I and every other Artistic Director in the country took notice, and there were many, many applications – including mine. I was interviewed three times, covering a variety of subjects, including artistic direction and management style. It was the fairest opportunity I’ve had with any application.”

“People were becoming aware that bilingualism was an asset – especially for the younger generation. We saw an opportunity to represent the true Quebec voice, one that is both French and English, and to present the works of people like Michel Tremblay in English.” This was a significant development for the theatre company; “The Board agreed that we had to reach out to the broader community. I’m very proud that Michel Tremblay considered Centaur as the home of his plays in English – that he didn’t have to go to Toronto to premiere his plays in English.”

The outreach efforts were also extended within the Montreal theatrical community. “We’d attend virtually every performance at the Fringe Festival, looking for new plays to bring to our audience in our January Wildside Festival. Our audiences could see new works without going to a warehouse somewhere and have to climb five flights of stairs.”

Artistically, McCall put Centaur Theatre into overdrive. “We had 21 World Premieres during the 10 years I was Artistic Director, and I was proud that as an English company we won the Nomination in the Theatre Category in the Grand Prix de Montreal for our Montreal Voices season in 2005-06.”

Special mention goes to Vittorio Rossi, whose plays have premiered at Centaur beginning with The Chain in 1988, and later with his Carpenter’s Tale trilogy – a tremendous success. McCall stated; “Rarely has a theatre company committed to a trilogy – especially when only the first play was written. It was inspired by the real life story of Vittorio’s father. It was an anchor for our Montreal Voices season, and all three plays were spectacular successes.” 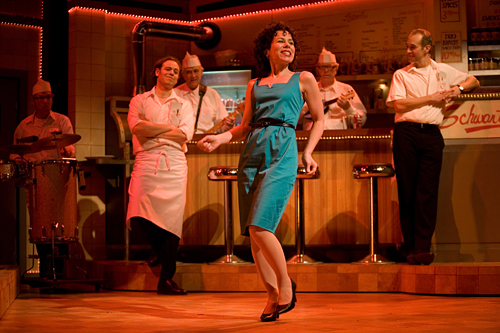 Roy Surette was the third Artistic and Executive Director as the Centaur Theatre Company entered its 40th Season.  A naturally enthusiastic and energetic person; Roy was truly excited to be living in Montreal and with his role at Centaur. “It’s a great place – it has a wonderful nobility both as a building and as a company.”

“I love the celebratory nature of theatre. There’s almost a sense of delusional optimism to work in theatre. We try to celebrate life as much as we can.” In that theme, Surette commissioned two musicals by George Bowser and Rick Blue. Schwartz’s: The Musical and Last Night At The Gaiety became huge hits with both critics and at the box office.

Roy was impressed with the wealth of talent in the immediate vicinity. “Montreal has a resilient and resourceful group of artists – no one is going to hand you a living in theatre. You have to go out and earn it.” As an English theatre company in Montreal, Roy was impressed with the Centaur Company’s great dedication and high production values. “There is a great group of highly talented people in all aspects of theatre. The Centaur audience is sophisticated – as a community, Montrealers have been supporting this company for decades.”

The curtain rises on Centaur Theatre’s 50th Anniversary Season on October 7. It’s a remarkable achievement – one that could not have been accomplished without the grass roots audience support that confirms the value of sponsorship for corporations, individuals and foundations. Staying relevant and accessible to the customer base has proved to be a winning formula.

For information about subscriber packages, please call the Box Office at: 514-288-3161 or visit the company’s website: www.centaurtheatre.com Enjoy!