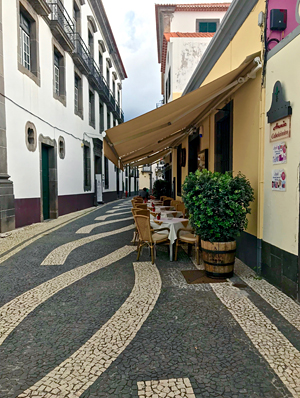 A flash of blue sea, a glimpse of red rooftops and a blaze of purple wisteria draped over an ancient stone wall–it’s a cascade of memorable images as I careen down a mountainside above Funchal, the capital of the island of Madeira.

I’m in a wicker toboggan powered by two carreiros (sledge drivers). Dressed in white and wearing straw boater hats, they steer the hurtling carts down narrow winding streets at speeds reaching up to 48 kilometres an hour. A traditional activity that’s been taking place since 1850, it’s an exhilarating introduction to this unique island.

Located in the Atlantic Ocean off the north coast of Morocco, Africa, the Madeiran archipelago, an autonomous region of Portugal, is home to four island groups. Only two of the islands, Madeira and Porto Santo, are inhabited.

Luxury Through the Ages 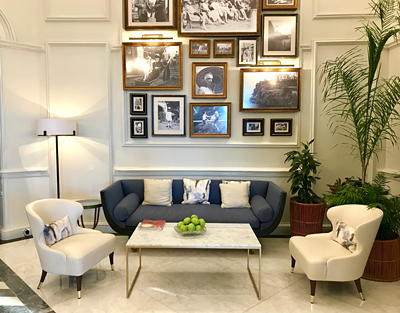 The main island of Madeira offers the most amenities for luxury travellers. Its strategic location as a stopover on 15th century trade routes led to its rise as an important port while the economic power of its sugar cane and wine industries fuelled growth through the 17th and 18th century.

Vestiges of this proud past can be seen in old town Funchal where the impressive cathedral, built with seven types of volcanic stone, anchors a picturesque network of cobblestone streets, sidewalk cafes, markets and museums, including the not-to-be-missed Sacred Art Museum. 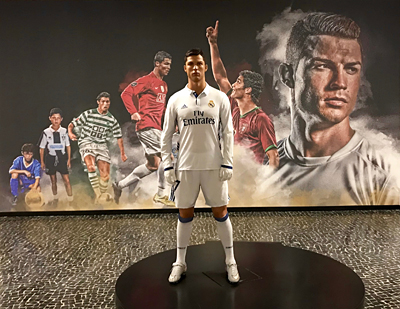 Cristiano Ronaldo’s Museu CR7
is a tribute to his talent
Credit: Francisco Sanchez

Just steps away on the seaside promenade, lifestyle hotel Pestana CR7 Funchal draws lovers of luxury and football (soccer) alike. Created through a collaboration between Madeira-born soccer superstar Cristiano Ronaldo and the Pestana Hotel Group, the hotel offers a contemporary design, rooftop infinity pool and hip restaurant-lounge that has quickly become one of Funchal’s hotspots. 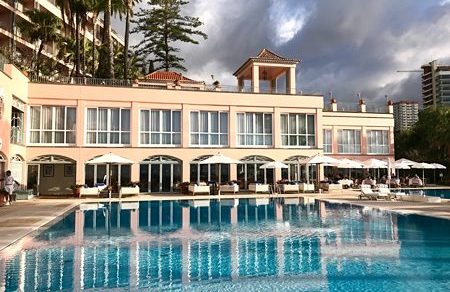 Next door, the Cristiano Ronaldo Museum celebrates the sports star with exhibits portraying his life story as well as his multiple FIFA Ballon d’Or awards. Fans will also find a treasure trove of sports memorabilia in the museum’s gift shop.

Another memorable stay is the legendary Belmond Reid’s Palace. Perched atop a cliffside overlooking the Atlantic, this classic beauty has hosted royalty, dignitaries and celebrities for over 125 years. Thoroughly updated, it features three swimming pools, an oceanfront spa and luxurious guest rooms but still evokes bygone elegance with traditions such as a formal afternoon tea, a Champagne Gala Brunch and Michelin-starred dining within the William Restaurant. Earning its first Michelin star less than two years after opening, the restaurant’s menu features creative plates showcasing seasonal ingredients and fresh seafood such as lobster and octopus.

Active adventurers will be particularly drawn to Madeira’s outdoor options including its levadas, one of the island’s top attractions.  These man-made canals, many which date to the 16th century, were created to irrigate the island’s vineyards and sugar cane plantations. The 2,170 kilometres of levada footpaths are classified according to level of difficulty, some trails offering an enchanting stroll through UNESCO-recognized laurissilva forests lush with orchids and ferns, while others traverse challenging high narrow ledges, dark tunnels and steep canyons. 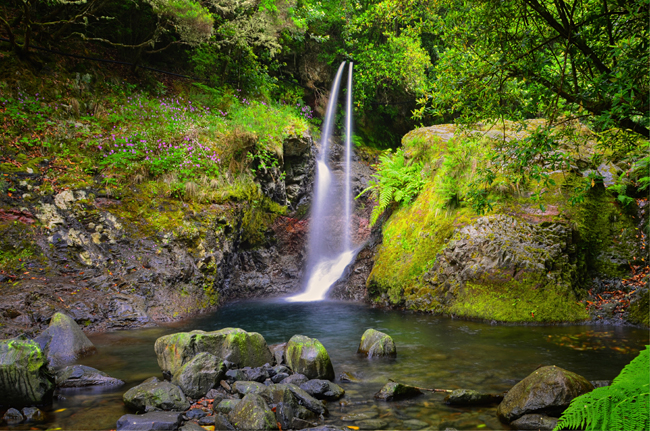 Take a walking tour of a levada in Madeira
Credit: Visit Madeira

For a more leisurely immersion into Madeira’s scenery, wander the pathways of Madeira’s many botanical gardens. During Portugal’s Age of Discovery, ships brought exotic plant specimens from around the globe. Funchal blooms with colourful jacaranda trees and poinsettia bushes, depending on season, and is famed for its Flower Festival held each spring.

For those who prefer sea, experiences include dolphin and whale-watching tours, deep-sea fishing, exploring marine caves with a dive school, or taking a day trip by private yacht, ferry or flight to the golden sand of the nearby island of Porto Santo.  Opportunities for watersports, from windsurfing or water skiing, are never far away. 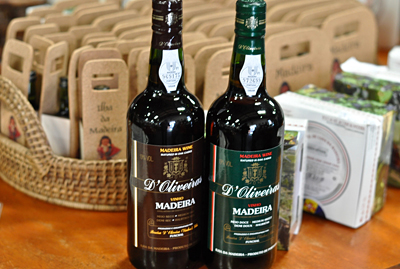 Enjoy a tutored tasting of a selection of Madeira wines in styles from dry to sweet dessert wines
Credit: Francisco Sanchez

A visit to Madeira would not be complete without tasting its iconic wine, developed through a 500-year history of production. Among the nine tasting stops on Discovering Madeira’s Food & Wine walking tour of Funchal are the cellars of Pereira de Oliveira, established in 1820. A tutored tasting of Madeira vintages includes a selection of dry to sweet dessert wines. 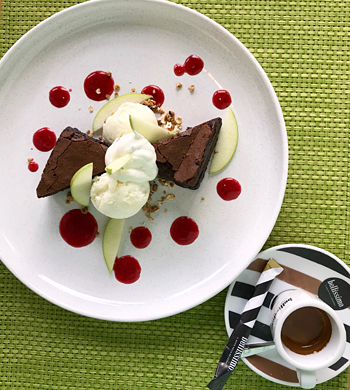 Although best known for its fortified wine, Madeira has another premium drink that’s one of the world’s most intriguing spirits. The island’s traditional rhum agricole is enjoying a revival. Created with sugar cane juice rather than molasses (much like the acclaimed rhum agricoles of Martinique and Guadaloupe), it’s hand-crafted using artisanal methods, earning Rum Da Madeira a Protected Geographic Indication (PGI) designation.

Well worth a visit is the Companhia dos Engenhos do Norte rhum distillery in the village of Porto da Cruz or closer to town, the Madeira Rum House, home to the island’s largest collection of rums. Sample a flight of artisanal aged rums or opt for a tutoured tasting of one of the rare bottles collected by proprietor Roberto Andrade. 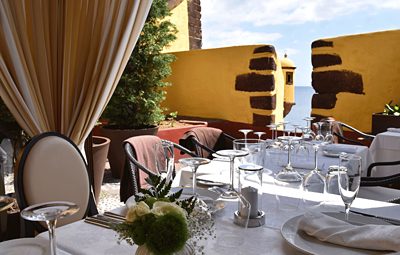 I wrap up my own visit to Madeira with a leisurely evening of fine-dining at Restaurante do Forte, located within the burnished stone walls of the 17th century fortress of São Tiago overlooking the Bay of Funchal. Refined and contemporary, the dishes–from prawns in citrus brine to a chocolate fondant with wild berries–merge international flair with Madeiran ingredients in a fitting finale to exploring this magical island.

Michele Peterson is an award-winning travel writer who specializes in food, drink and sun destinations. Her work has appeared in major magazines, guidebooks and travel anthologies. Get travel tips, discounts and recipes on her A Taste for Travel blog and via Twitter/Instagram @atastefortravel.

Getting There: Azores Airlines (formerly SATA) offers flights to Ponta Delgada, Azores direct from Montreal seasonally. Madeira is a 2-hour direct flight from Ponta Delgada and 90 minutes from Lisbon. www.azoresairlines.pt 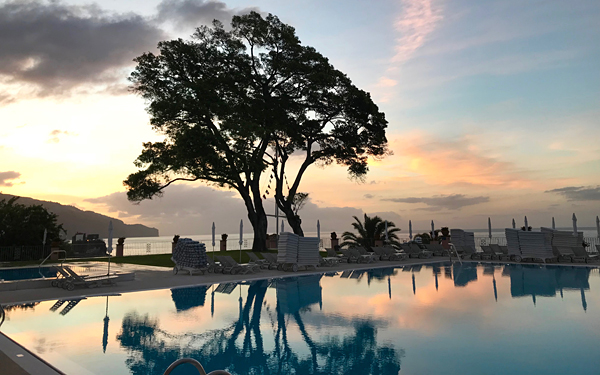