As ever, the city’s late-summer fair was always a festive occasion dating back to the times when Ville-Marie was little more than a tiny colony on the edge of the seventeenth century’s French empire. Loyal to both the king and the church, people mostly worked their land until it was time to bring in the harvest that signalled the end of another year in the fields. While the city’s own records indicate that the home-grown market did a lot to reflect the beginnings of the colony’s own economy, the late-summer fair also gave the island’s residents a chance to socialize and to celebrate the end of another year in the fields and the forests that defined the king’s new colony.

“It’s a chance to make the city’s history come alive in the minds of so many people,” said Annick De Blois.

As the late-summer fair will take up the August 25-26 weekend before the Labor Day holiday, De Blois said that the entire area around the city’s Pointe-À-Callière museum will be closed off to traffic after which museum officials intend to set the stage for an early 18th century country market. In a city that’s already obsessed (with good reason) by its own history, De Blois cited the museum’s past experience as she promised The Montrealer that this year’s edition will be “…better than ever” as the museum begins to capitalize on recent discoveries that have already placed it on the cutting edge of North American archeology. 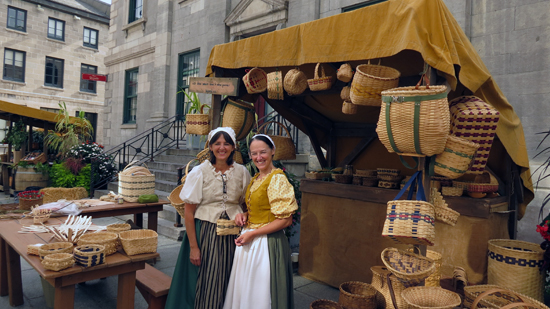 Although De Blois – a museum curator – maintains that the museum’s fair always did its best to include the island’s Amerindian presence at the fair in much the same way as they shared and occupied their own space during the colony’s early years, she also mentioned that this year’s edition will include a special exhibition during which Hawdenosonee (Iroquois) craftsman William ‘Billy’ Russell will build an authentic canoe from ‘scratch’ on site outside the museum. Amateur historians can take in lectures on early 18th century cooking (Saturday, August 26 at 10:30 am) and also learn about assorted dress codes such as they were defined and adapted for the extreme weather that affected the king’s French colony (Sunday, August 26 at 10:30 am). Children can take part in games that will teach them the kind of life they would have led in the woods as both trappers and ‘coureurs de bois’.

“There’s a lot of ‘living history’ at the fair,” said De Blois as she explained that the city’s own economy began to grow out of all the financial activity that took place in the market. While the fur trade continued to dominate the colony’s affairs, deals were made in the local tavern as traders financed trappers who were willing to risk their lives thousands of miles away in the bush in order to open new fur trading routes. While women shopped for fabric to clothe their growing children, axe heads, knives were being made and bought on the spot for a native population that understood the real value of the white man’s tools.

Three hundred and seventy six years later, people can line up to watch as the spinner’s wheel begins to create the wool that will find its way onto that hand-driven loom that will create warm and colorful shawls for any woman who wants to wear one. Others will get to see the blacksmith hammer out the carbon from a freshly cast axe head that’s bound to make a big difference for the man who needs a good axe in the woods. Aside from all the artisanal stands, there will be plenty of food made from recipes that are already several hundred years old as well as sword fighting (tomahawk) lessons and graphology for anybody who wants to learn how to write with a goose quill pen.

While a lot has happened to the old French colony over the past 376 years since 49 men, three women and a little girl stepped off the barge onto the beach located only a short distance away to the south of the Pointe-À-Callière museum, the colony’s Public Market harvest fair probably had as much to offer those early families as it will for today’s families who can appreciate their legacy.

Pointe-A-Callière is located at 350 Place Royale in Old Montreal. For more information about this fascinating museum and the Harvest Fair, please visit: www.pacmusee.qc.ca or call: 514 872-9150. Enjoy!