THE BLUE METROPOLIS INTERNATIONAL LITERARY FESTIVAL TAKES TO THE STREETS…

of Montreal, the Eastern Townships, Contrecoeur, the Saguenay and elsewhere in Quebec

Blue Metropolis International Literary Festival has launched 6 literary walking tours to get residents and visitors out into the spring weather. Each self-guided walking tour comes with a podcast made up of original texts written especially for the tour; some read by the author, others narrated by professional actors. With these incredible companions at your side, you’ll (re)discover the nooks and crannies of Montreal and Quebec. The walking tours are broken up into easy segments, depending on your time and inclination. This is an invitation to roam, listen, read, daydream, catch enticing smells on the wind, view the St. Lawrence and the sky, and to give yourself a breather—outdoors. Or, sit back and enjoy an inspired aural visit to this lively, diverse, creative metropolis. 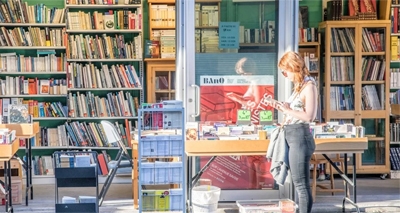 Montreal Shopping & Books takes a novel look at the city with original contributions from its authors. There will be stops along Saint Catherine Street West, at the Jean-Talon market, the Hochelaga district, the South-West, and in other Montreal boroughs. The tour focuses on books and bookstores that offer a personal touch, stylish dresses, and designers. The various itineraries were put together by participating authors and bloggers, including Monique Polak, Samuel Larochelle, Gabrielle Delamer, and G L O W Z I, among others. Marzia Pellissier and Christian Robert, co-founders of Marcheurs de Montréal, offer an expansive walking tour of city streets starting from Old Montreal. Various tours in English and French.

Polak shares her favourite spots for dresses (St. Laurent Blvd and the area north of Jean Talon Market) and books (Snowdon and Pointe Claire Village), with java pick-me-ups along the way. “I’d be a lot richer if it weren’t for my addiction to dresses!” said Polak. “Montreal just happens to be an amazing city for dress lovers like me. Join me as I take you to my favourite dress shops in town—and stop for coffee along the way.” Polak concedes that both readers and writers can never have enough books, or tire being around them, “Whether we’re there to browse or to purchase, bookstores bring a kind of solace that little else can. Come along with me to my favourite Montreal area bookstores. Of course, we’ll stop for coffee on our way!”

Yiddish Montreal will introduce you to the generation of Jewish authors who came before Mordecai Richler and Leonard Cohen. They wrote in Yiddish, a language often heard in the streets of Montreal back then, and sometimes even today. Your guide will be journalist Shelley Pomerance. Authors Goldie Morgentaler, Norman Ravvin and Sherry Simon invite you to explore the Jewish literary heritage of Montreal. In English.

“It’s easy to forget that Montreal was once a centre for Yiddish literature rivalled only by New York City, that over 40 Yiddish writers made this city their home, and that a “third solitude”, Yiddish, co-existed alongside English and French on the Plateau,” Said Pomerance. “The contributing authors bring that era to life as they reminisce about the Yiddish-speaking writers who lived in, and wrote about, this storied part of town. They reflect on the Jewish Public Library’s early years, have some surprising things to say about the cross on Mt. Royal as a symbol for these writers, and explore the demise of Yiddish in the neighbourhood.” 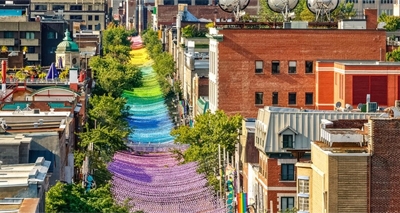 Tensions + Intersections asks us to look anew at Montreal’s Gay Village. With author and editor Nicholas Dawson in the lead, this walking tour draws on the poetry and non-fiction of Marie-Claude Garneau, Jean-Paul Daoust, Eli Tareq El Bechelany-Lynch and Kama La Mackerel. It illuminates the creative and other tensions intersecting one another, making up the Gay Village’s uniqueness. Focused around St. Catherine St. east and extending out, it is the largest gay village in North America. The tour is in English and French. 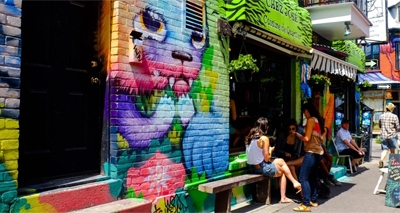 Montreal en todo sentido reminds us that several Spanish-speaking communities have been part of Montreal’s DNA for decades. This literary circuit tracks Latino Montreal’s history through its culinary flavours, its music, and even tango. Devised by Ingrid Bejerman, the tour draws on original material from authors Flavia Garcia, Angel Mota and Rafael Osio Cabrices; original voices from Mexico, Venezuela and Argentina. The tour is in Spanish and French. 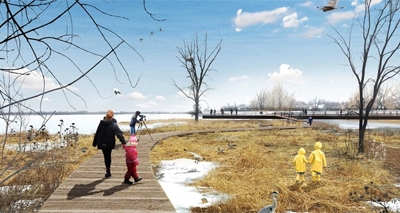 Need some space… a view that runs to the horizon? How about streaming that has nothing to do with screens? Then Contrecoeur, the little city that grew on the banks of the St. Lawrence, is for you. Three authors, native-born or transplants, representing different generations, will take you around their favourite haunts. This walking tour,  Contrecoeur, dans mes yeux, dans mon coeur, features new material by Myriam Vincent, Philippe Mollé and Bernadette Renaud. They’ll make you want to visit the area year-round. 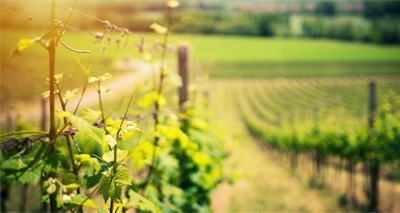 Les routes littéraires des alcools du terroir is sure to entice. This tour covers most of Quebec! From Shefford to Baie-Comeau, with stops in Montreal, Bécancour, Saint-David-de-Falardeau and the Saguenay, learn about handcrafted vodkas, whisky, and other spirits by artisan distillers. The podcast’s guides are Louise Portal and Sylvain Massé. The series features original material by local authors Marie-Ève Bourassa, Martine Dorval, Mathieu Fortin, Gérard Pourcel and Louise Portal, writers who not only live in these areas, but know them intimately; too good to pass up. These tours are in French.