The Musée National des Beaux Arts du Québec (mnbaq) is celebrating its 85th anniversary this Year. To launch the festivities, it is proud to present in Quebec City the North American premiere of the Alberto Giacometti Exhibition, which enjoyed resounding success at The Tate Modern in London last summer. 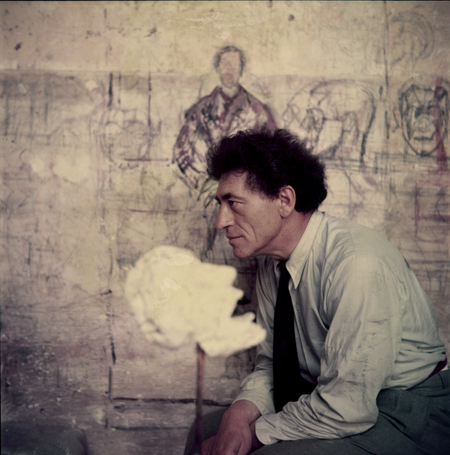 Alberto Giacometti was a celebrated sculptor and painter

From February 8 to May 13, 2018, visitors can discover this major Retrospective presented by Desjardins in the Pierre Lassonde pavilion of The MNBAQ and savour the emblematic work of Alberto Giacometti (1901 – 1966), one of the 20th century’s foremost artists. The Swiss sculptor and painter who lived in Paris, Giacometti is known for his unique sculptures of elongated subjects with especially detailed Surfaces, but the exhibition will also celebrate the painter. The Québec City exhibition includes about 50 paintings and original plaster casts, including several never before exhibited. The exhibition will also more clearly reveal the artist’s interest in Egyptian art and the primitive arts, his fascination with the question of resemblance, and his ties with several leading writers, including Beckett and Jean-Paul Sartre.

Numerous masterpieces have been assembled for this outstanding exhibition, the first one organized in North America for more than 15 years by the Fondation Alberto et Annette Giacometti in Paris. Aside from key works such as Suspended Ball, Pointing Man and the celebrated Walking Man of the impressive body of more than 230 objects from the Fondation’s varied collection and major European collections; the exhibition highlights 110 sculptures, 50 paintings and 70 drawings and archival documents. It showcases the artist’s early work in Paris in the 1920s up to his crowning achievements in the 1960s, a brilliant career that spanned five decades.

Major masterpieces. Through a unique circuit in four temporary rooms of the Pierre Lassonde Pavilion focusing on a multitude of inviting themes (Early Personal Style, Approaching Surrealism, Melancholy, Return to Figuration, Return to Painting, The Mature Style, Annette and Diego, The Portrait Paintings, Revisiting the Past, Walking Man, The Last Works) visitors will discover by means of an outstanding panorama the heart of Giacometti’s extensive, varied body of work. 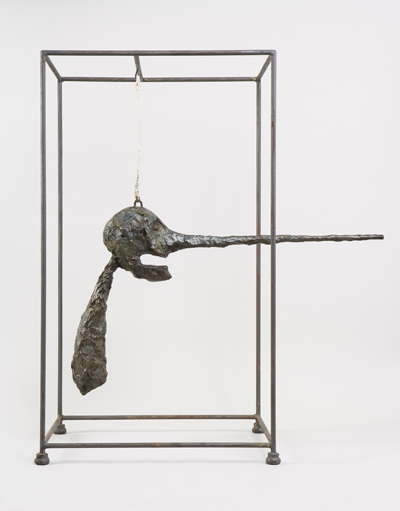 Among the major sculptures in the exhibition, mention should be made of Spoon Woman, freely inspired by a West African ceremonial spoon. It’s pure lines make it a key work from Giacometti’s first period. It proposes a bold synthesis of the formal vocabulary of the primitive arts and the innovations of modern sculpture.

Mention must also be made of Pointing Man (1947), a work produced in a single night for the artist’s first New York exhibition. The tragic figure, the first of a long series of male characters, translates the very essence of the human condition.

The Nose (1947), another remarkable work by Giacometti, is a striking head suspended in a void. It expresses a nightmare that deeply troubled the artist several years earlier when he was at the bedside of a dying man, fascinated by the latter’s nose, which seemed to lengthen indefinitely as he breathed his last. 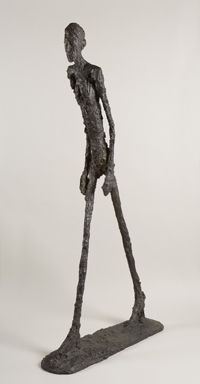 Walking Man (1960, inspired by Egyptian statuary and focusing on the representation of movement, is Giacometti’s best known work and one of the most celebrated sculptures of the 20th century. The theme of the walking man appears starting in 1947 in the artist’s sculptures.  Moreover, the same year, Giacometti sculpted an initial version of this theme on a human scale, then developed it above all in smaller works.

Striking design for an outstanding exhibition: Jean Hazel, senior designer at the MNBAQ, has imagined a unique installation to present this major retrospective. To highlight the numerous masterpieces assembled, he has explored the theme of melancholy, an emotion that tinged the artist’s life, but the daydream aspect of melancholy, which spurs introspection and meditation. He has adopted the theme of waves to create 23 modules of varying dimensions. The tailor-made, uncluttered furnishings made of blond maple, the same material as the flooring in the temporary rooms of the Pierre Lassonde Pavilion, give the impression that waves of wood are rising like surf from the ground. The neutral, unobtrusive pedestals highlight each of Giacometti’s sculptures. Warm and earth colours, which alternately evoke fog and sand, were chosen to create this meditative atmosphere that seeks to enhance the visitor’s overall experience.

A memorable interview with Alberto Giacometti: For the enjoyment of visitors, a space has been set aside to present excerpts from a film by Ernst Scheidegger (1923 – 2016) and Peter Münger (1937 – ), Alberto Giacometti, in which they can observe Giacometti at work in his Paris studio. The singular interview, filmed in 1964, offers an outstanding glimpse of his work and his complex relationship with the live model. During the 1950s, numerous collectors, intellectuals, artists, journalists and merchants visited the mythic studio. Ernst Scheidegger, one of the foremost photographers at the time, thus filmed Giacometti painting a portrait of their friend Jacques Dupin, the author of the first monograph devoted to the artist and the director of Les Éditions Maeght.

A comprehensive MédiaGuide:  Visitors who wish to strikingly enhance their visit to the exhibition can do so with the MédiaGuide, the most imposing one created by the MNBAQ. Through nearly 30 stations visitors can grasp all of the stages in the artist’s approach clearly set in their historic context. This fascinating, intimate voyage through Giacometti’s life, illustrated by numerous archival images, also affords visitors an opportunity to learn more about his personal life, loved ones and friends.

After Québec City, New York and Bilbao, The MNBAQ is proud to be part of the prestigious circuit of this exhibition, which opened at the Tate Modern in London in the summer of 2017 and will be presented at the Guggenheim Museum in New York in the summer of 2018, then at the Guggenheim Museum Bilbao in the fall of 2018. The English press was especially enthusiastic last summer.

“The intensity of this huge range of work by Giacometti is thrilling” according to The Times.

The Alberto Giacometti exhibition is presented at the Musée national des beaux-arts du Québec and is jointly organized with the Fondation Giacometti in Paris. The exhibition is being made possible through a cultural development agreement between the Québec government and Québec City. The contribution comes from the Mesure d’aide financière à l’intention des musées d’État pour des expositions internationales majeures. 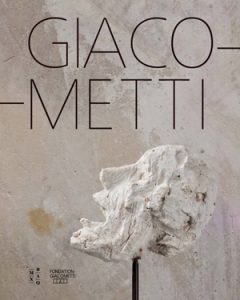 This publication provides an overview of a spectacular career.  A publication has been designed based on the outstanding collection of the Fondation Giacometti in Paris that spans the artist’s entire career through all of the paintings and sculptures exhibited. In particular, it presents Giacometti’s masterpieces, such as Suspended Ball, Cube, The Nose and Walking Man, and a varied selection of rare original plaster casts and paintings, outstanding works that are sure to please visitors.

The publication has more than 200 pages and is richly illustrated with more than 180 photographs. It is an unrivalled means to foster understanding of Giacometti’s singular universe. Essays by three eminent specialists, Catherine Grenier, Director and Chief Curator of the Fondation Giacometti in Paris and commissioner of the exhibition, Petra Joos, Chief Curator of the Guggenheim Museum Bilbao, and Mathilde Lecuyer-Maillé, Conservation Attaché, Fondation Giacometti in Paris and associate commissioner of the exhibition, and an exciting interview by André Parinaud with Giacometti in 1962, shed light on the artist’s approach and the context in which he worked. Alberto Giacometti is available in Québec at the MNBAQ bookstore-boutique and in bookstores for $44.95. ISBN: 978-2-551-26179-6