TAMPA – The cuisine in Tampa Bay is just as unique and rich as its culture. I did a lot of research on dining establishments before we left and I was very pleased with our choices.

When in Tampa, you must experience Florida’s oldest restaurant and in fact the largest Spanish dining establishment in the world. The Columbia Restaurant (www.columbiarestaurant.com) was founded in 1905 by Cuban immigrant Casimiro Hernandez Sr. It began in Tampa’s Ybor City, (pronounced EE-bore) as a small 60-seat corner cafe known for its Cuban coffee and authentic Cuban sandwiches, frequented by the local cigar workers. The original Ybor City location is nothing short than magnificent. Additional Columbia locations include St. Armands Circle in Sarasota, the Historic District in St. Augustine, Sand Key on Clearwater Beach, Central Florida’s town of Celebration, Columbia Café on the Riverwalk in Tampa and Columbia Restaurant Café at Tampa International Airport.

The restaurant is open daily for lunch and dinner. Some of the menu favorites include Columbia’s Original “1905” Salad,® Spanish Bean Soup, The Original Cuban Sandwich, a variety of Tapas, Paella, Red Snapper “Alicante,” Pompano en Papillot, Roast Pork “A la Cubana,” Chicken and Yellow Rice “Valenciana,” Filet Mignon “Chacho,” Café con Leche and Flan. A gluten-free menu is available. After enjoying some white sangria, the three of us agreed to share some items from the menu starting with the Tapas. We moved on to share two main courses starting with The Ropa Vieja, wherein  beef is shredded, sautéed and simmered with onions, green peppers and tomatoes. Served with platanos and white rice we thoroughly enjoyed this dish. The same goes for the baked stuffed grouper. This featured a boneless fillet of red grouper stuffed with crabmeat and a tropical passion fruit butter sauce. Gently baked, it was served with yellow rice and fresh vegetables.

When it came time to have dessert, we had just enough room to share the Churros “Tres Amigos” Golden brown Spanish pastry, dusted with cinnamon sugar and served with three sauces of rich warm chocolate, caramel and guava. It was a terrific meal and let me add that this represents a very affordable choice for families. 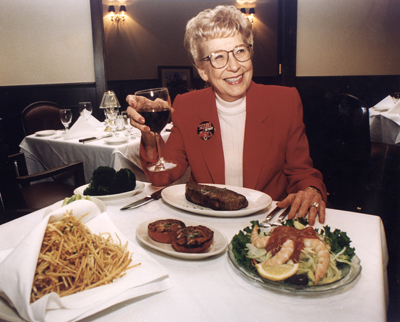 Ruth’s Chris Steakhouse (www.ruthschris.com) locations can be found across the United States and elsewhere around the world. While in Tampa, we dined at the 350- seat 1700 North Westshore Blvd. location in what would mark my long awaited first review of this very famous restaurant chain. More than 50 years ago, the “First Lady of Steak,” Ruth Fertel, bought a local steak house in New Orleans, Louisiana. It was called Chris Steak House. She had never planned to expand, but after a fierce kitchen fire decimated the property she was forced to relocate in order to stay in business. Within 10 days she had the restaurant up and running. But the Chris Steak House name was not allowed to move with it. With little time and a mischievous smile, Ruth added her own name to the sign, making it “Ruth’s Chris Steak House.” Later Ruth admitted the name was strange, but she managed to work around it. Ruth’s Chris Steak House has now brought its signature sizzle to more than 150 company and franchised owned locations in the U.S and internationally. Their perfected broiling method and seasoning techniques ensure each cut of USDA Prime beef they serve arrives cooked to perfection and sizzling on a 500 degree plate. The menu includes seafood, appetizers, sides and desserts.

For dinner let us recommend the Porterhouse steak for two – 40 ounces of prime beef with the rich flavor of a strip and the tenderness of a filet. This was more than enough for our party of three, with some roasted cremini mushrooms and fingerling potatoes on the side. While we each had our eyes on one of the many excellent soups and salads as a pre-meal selection, instead we agreed to share a small (but it is actually quite large) chilled seafood tower – Maine lobster, king crab legs and knuckles, colossal lump crab meat and jumbo cocktail shrimp served with both Sriracha-lime seafood   and cocktail sauces. When it came to dessert, our waiter Wayne suggested we go with the crème brulee and we did so with a few spoons. Wayne was right on the mark.

When on holiday we always try to find the best seafood restaurant in town. In Tampa, that would be Oystercatchers (www.oystercatchersrestaurant.com) at the Grand Hyatt at 2900 Bayport Drive.  The menu highlights an array of the freshest, wild and line caught fish available, organic produce and seafood specialties with a unique and contemporary flair.  Our server, Donald, has been part of the Oystercatchers staff for well over 20 years and he guided us excellently. General Manager Justin Beach and Chef Clarke actually greeted us at the start of the evening with a special sampling of their scallops. They were so delicious we knew we had to include this as part of our main course.

For our party of three we chose to share a number of dishes and that started with the appetizers: eight splendid oysters, an order of golden calamari fries, an arugula salad and yellowfin tuna (red in color, served medium rare from Florida’s East coast). This was a great combination! When it came to the main course, we opted to share a two pound lobster. It came to the table completely cut up and easy to dip into the garlic butter. We also added an order of large juicy sea scallops from the Mexican Gulf, perfectly prepared and among the best I have tasted in many years.

For dessert we shared the house specialty, a slice of key lime pie and a piece of sumptuous chocolate cake.

We had dined at the famous Bern’s Steak House (www.bernssteakhouse.com) in Tampa a year earlier. One evening we decided to go to Bern’s after our own dinner and back inside the world famous Harry Waugh Dessert Room. Built in 1985 using redwood wine casks to create 48 private rooms, guests get to enjoy nearly 50 desserts, wines, ports, sherries, and madeiras. This represents a separate sitting. All desserts – ice creams, sherbets, pies, pastries, hot fudge, whipped cream, breads and crackers – are made by Bern’s with the freshest and best ingredients available. Make sure you have a reservation or prepare to wait a long time for a table.

Mike Cohen can be reached at [email protected]. Follow his travels at www.sandboxworld.com/travel or on Twitter @mikecohencsl.