Through perseverance and hard work, Ins Choi’s play Kim’s Convenience became a Toronto and then national box office success. The highly successful CBC television adaptation has given Paul Sun-Hyung Lee a well-deserved star status. He is the only actor who has played the lead role of Appa on stage and television.

Paul Sun-Hyung Lee’s parents enjoyed solid careers and professional status as teachers in their native Korea, but the couple believed that their son and daughter could have a better future in Canada. Their decision to emigrate to Canada was a courageous move; one that would involve a heavy price for the Lees in order to fulfill their dream of providing a better life for Paul and his sister.

Paul has a long and impressive list of film, television and theatre credits on his resume, but as an Asian actor, the roles were often small parts. “I had a lot of lean years, and had a lot of other jobs in order to make ends meet. I worked at Blockbuster Video, Indigo, sold wine and also spent a ‘tragic’ two weeks working as a waiter in a high-end restaurant.”

The Lee family’s immigrant experience is similar to many families who have come to Canada for a better life; in that their transition involved an initial sacrifice and reduction of lifestyle in their new country. “My parents were teachers in Korea, a profession that gave them a respected status and comfortable lifestyle. They owned a home, and we had a servant in our household. My mom’s sister was already in Canada, and she had good things to say about this country. My parents worried that the Korean economy could weaken, and that my sister and I could have a better future in Canada.”

“My parent’s professional status was not recognized in Canada, and so when we arrived in London, Ontario, my dad got a custodial job at the University of Western Ontario in London. My mom was employed doing key punch data entry. The downgrade in employment status was really hard on my dad; especially when former colleagues from Korea would come to Western to teach, or for a conference, and there he was sweeping the floors.”

The Lee family moved to Toronto, where Paul’s mother and father purchased a convenience store at Sherbourne and Wellesley. “It was called Chez Lee, and we lived upstairs. There is a tremendous similarity from our family’s experience owning a local convenience store and Kim’s Convenience.”

“We had Chez Lee (my dad used to pronounce the z like an s, so it came out like Cheslee) for two or three years. Then the oil boom hit Alberta, and we moved to Calgary where my dad bought a fish ‘n’ chips franchise restaurant in Calgary, and my mom got a job managing a Mac’s Milk convenience store. I was literally raised in a convenience store. Anybody who’s ever worked in a family business can relate to that experience. A lot of customers don’t realize that the person at the cash is more than the guy who’s selling you your cigarettes or chips. He’s another human being, most probably with a family to love and support.”

Paul eventually moved back to Toronto to study acting. He met Ins Choi, the eventual creator of Kim’s Convenience when the two were auditioning for a television role as an orderly. “The community of Asian actors is relatively small and supportive. We tend to say ‘well – at least one of us will get the part.’ Before we were called, Ins went and changed into hospital scrubs, and I could see that he was really going after the part – and he got it.” It would prove to be an important meeting between the two actors. 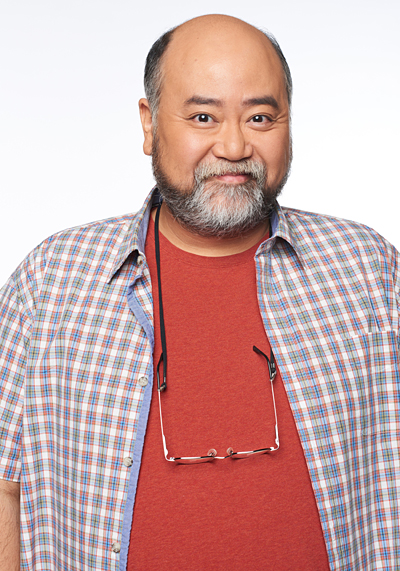 Paul Sun-Hyung Lee is the only actor to have
portrayed Appa, the lead character in the CBC hit TV series, Kim’s Convenience

“Ins called me a short time later because he was writing two scenes and they required an older Korean actor. It was about a convenience store, and I was immediately struck by the authenticity of the scenes and the dialogue. I suddenly felt that I wasn’t alone – that I wasn’t the only guy who worked in his parent’s convenience store. There was something very special happening in these scenes.”

The playwright’s reaction to Paul’s presentation was immediate; ‘That’s the guy, that’s the voice I want for this play’. This initial reading took place in 2005. Ins continued to develop the two scenes into a play. “He received some money from his church, got grants and through determination he completed the play. “Ins shopped it to all the theatre companies in Toronto, but they all took a pass on it. He then entered Kim’s Convenience into the New Play Competition at the Toronto Fringe Festival and the play got a spot in the 2011 festival.”

Paul continues; “There’s a universality about certain truths that come from the immigrant experience in Canada. The convenience store owner has many of the same experiences as a cab driver, a subway ticket taker or anyone else that we often don’t recognize as fellow human beings.”

After gaining attention with the Toronto Fringe Festival in 2011, Kim’s Convenience was signed by the Soulpepper Theatre Company. During the first run, every show was sold out – and the company decided to re-mount the show just two months after its initial run, a first in Canadian theatre. A national tour followed, beginning in Ottawa. The production continued to gain momentum and fans. And then CBC Television came calling…

“I remember exactly the day that we got the news that CBC was going to pick up the show as a TV series. It was in January 2014, and we were performing at the National Theatre in Ottawa. We learned that the show would have its debut in 2016 – which is really fast for a new TV show. We had the advantage of already having the characters from the play. We went to camera during the summer of 2016.”

“Television is a very different medium from live theatre, and we wondered how the play would transition from stage to TV. The show looks beautiful on television! From the lighting to the colourful set. It’s a richly deserved success for Ins… a testament to his creativity and his perseverance to get the show produced after having to overcome so many obstacles at the beginning.”

Paul describes the actual filming of the first season; “The time on the set was smooth and loving. There was a great chemistry with everyone in the cast, the director and crew.” To confirm Paul’s statement, everyone is the cast and crew have been asked back for the second season.

Kim’s Convenience takes on some sensitive issues. “We touch on racism and homophobia. My character Appa is an imperfect man, and he says things out of ignorance – not from malice. He learns from his mistakes when he has his comeuppance. Appa is a man of tremendous love. He’s also quick to anger – one of his flaws.”

“I’ve never been part of something this big, and everyday I’m living the dream. Not everybody gets this chance! I’m humbled by this experience. Like everything in life – things end; but in the meantime I’m enjoying this.” With a self-deprecating chuckle Paul adds’ “What other shows need a middle-aged balding heavyset Korean guy for the lead role?”

“By the time we finish our Montreal shows at The Segal, I’ll have played Appa 487 times. I’m the only actor to ever play the lead role, and its big responsibility for me as an actor. The role takes a tremendous effort, and I’m emotionally drained by the end. I have to inhabit the present, to become Appa so that my performance has credibility for the audience.”

Asked about how his parents feel about Paul’s success, he responds; “They are over the moon – so proud of what I’ve done, even though it’s outside that box. We’re telling their story – a story of the Canadian immigrant experience. They gave up so much and my father endured soul-destroying menial work so that he and my mother could give my sister and me a better future; and their dream has come true…”

“Kim’s Convenience is a great Canadian comedic series, not just an Asian comedy. Kim’s can open the door for other for other Canadian minorities.”

As we come to the conclusion of our conversation, Paul summarizes; “This is like winning the lottery. It started out as me reading for two scenes, then winning a slot at Toronto Fringe, then a main stage play, to a national touring play and now a second season for a television show. Plus – this summer we’re doing a two week test run Off-Broadway in New York.”

Kim’s Convenience will open at The Segal from March 8 to 19. CBC will be hosting a special meet and greet following the March 13th performance at 9:30 with Paul Sun-Hyung Lee and his co-star Jean Yoon. For tickets please visit: www.segalcentre.org or call 514-739-7944. Enjoy!