Le Germain Toronto at 30 Mercer Street, in the heart of Toronto’s theatre district, is one of seven boutique hotels in the Germain Hotel Group. The company is now a third generation business, and ranked as one of Canada’s 50 Best Managed Companies. Siblings Christiane and Jean-Yves Germain modeled their first hotel on The Morgan in New York City. The company now has hotels in Calgary, Toronto (2), Montreal, Quebec City and Charlevoix. We recently visited Le Germain Hotel Toronto on Mercer Street, a convenient location for business or holiday trips to Toronto.

Mercer Street is just one block long, and a short walk from the Toronto International Film Festival, the Royal Alexandra and Princess Theatres and Roy Thompson Hall. During TIFF, Le Germain Toronto is a preferred hotel for Hollywood directors, writers and industry people attending the festival.

The 122 room boutique hotel was a newly constructed building for the family business. There is an abundance of natural wood throughout the public spaces, restaurants, meeting rooms and guest rooms. While the decor is urban chic and contemporary, the presence of wood adds to the warmth of the building.

“We provide personalized services and quality.

Authenticity is reflected in what we are and what we offer.”

Guests are welcomed into a two storey lobby, which includes a sitting area, a fireplace, and library bar on one side; and the Victor Restaurant and bar to the right. The two storey glass wall opening onto the street provides ample natural light. 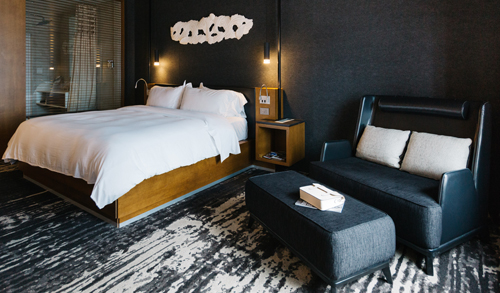 General Manager Nicolas Lazarou took me on a tour the Le Germain Toronto, explaining that they had recently re-decorated the rooms. “We renovated two prototype rooms, and then listened to what the guests had to say. Everyone agreed that the prominence of natural wood provided a feeling of warmth that we wanted to retain. We commissioned local artists to provide fabric wall art, which works very well with the dark grey felt wall covering.”

“The lounge-style chairs were designed specifically for Le Germain hotels to provide comfort and a unique functional style. Rooms are equipped with 55” flat screen televisions, as well as a mini-bar and Nespresso coffee maker that you’d expect in a first class hotel. Showers have a rain showerhead that also infuses air into the water.”

During the next phase of renovations, the 11th floor fitness centre will be expanded to take over a space now used as a putting green, than is unused in the late fall and winter. There is also a lovely sun deck on the 11th floor.

The complimentary and extensive continental breakfast is served in the Hatley Room, located on a mezzanine overlooking the lobby, Victor Restaurant and Mercer Street. “We’re planning on re-purposing this room for larger meetings and private functions. To accomplish that, the plan is to increase the size of Victor and open it for breakfast lunch and dinner.”

The Library Bar overlooking the lobby was clearly a popular meeting place in the early evening. One group of well-dressed cosmetic industry executives from Montreal held a pre-Gala reception before heading out for their evening.

“Our employees are at the heart of our business.

We want them to grow and build a career with us.” 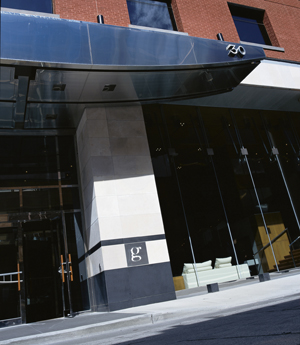 While Le Germain Toronto is clearly an upscale hotel, we found the staff to be warm and welcoming.  The doormen, front desk personnel, servers were all genuine in their desire to provide efficient and friendly service.

We had an early dinner one evening in Victor, which is named after the Germain patriarch Victor Germain. We explained to our server that we were attending a show that evening, and that we’d need to leave by 7:30. Following her recommendations, we settled on a serving of crab cakes and steak & frites for me. Both dinners were superb, enjoyed while we listened to some cool jazz. Service was prompt but not rushed, even though we were on a tight schedule.

Whether you’re travelling to Toronto for business or a holiday getaway, I suggest that you book accommodations at Le Germain Toronto, where walks to the theatres are measured in minutes, and the financial centre not much longer. We walked from the hotel up to the Art Gallery of Ontario in about 15 minutes. The CN Tower, Rogers Centre and Ripley’s Aquarium of Canada are also nearby. And if TIFF is in your plans this summer – Le Germain Toronto is action-central!

For information about Le Germain Toronto and to make a reservation: www.germainhotels.com or call: 1-866-345-9501. Bon Voyage!