The talented Montreal violinist with a phenomenal international reputation Alexandre Da Costa will be performing his project Stradivarius à l’opéra at Théâtre Maisonneuve on February 23rd. He’ll be performing operatic movements from Puccini to Wagner, Prokofiev and Tchaikovsky on a «Di Barbaro» Stradivarius dating from 1727.

Jelly and George: Two of the most brilliant composers of the 20th century–ragtime legend Jelly Roll Morton and the immortal George Gershwin–revisited by three of the most sparkling rising stars in contemporary jazz: terrific pianists Aaron Diehl and Adam Birnbaum, and spectacular vocalist Cécile McLorin Salvant. I’ll be an evening with the timeless classics and lesser-known gems of these two giants of jazz at Salle Pierre-Mercure on February 24th.

On February 26th at Maison symphonique, pianist Alain Lefèvre will present his 6th album of original compositions: Sas Agapo, or “I love you” in Greek… A new opus entirely inspired by the picturesque, profound setting of his time in Greece, the album opens a window onto an infinity of emotion.

Flamenco Guitar, February 28-March 1st Lo Esencial show by Luis de la Carrasca is back at Gesù after sold out performance at the Montreal Jazz Festival in 2015. It is a spectacle that reconnects with the very essence of this art form born in Andalusia, an adventure in the purest, most authentic flamenco: the music of its inception, when these popular songs transformed suffering into hop and empowered the people to laugh at their oppressors. 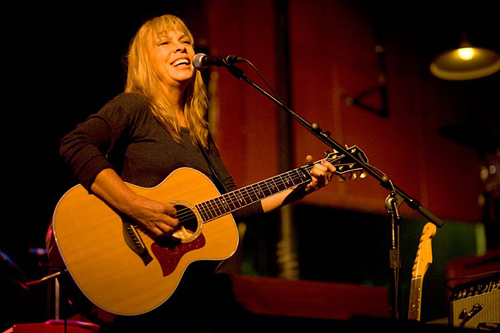 Rickie Lee Jones will perform at
Theatre Maisonneuve on March 1

Two icons of American song meet in a double bill poised between jazz, folk, blues and pop. First, the great Rickie Lee Jones, 30-year veteran with over 15 albums and 2 Grammys to her credit, brings us her first album of original songs in 12 years, The Other Side of Desire. Next, the exquisite Madeleine Peyroux unfolds a collection of her finest moments and greatest hits, mixing originals with classics from the American songbook. It’s really a concert not to be missed at Théâtre Maisonneuve on March 1st.

Staged to mark the 100th anniversary of the birth of La Môme, the Piaf show has been a runaway success as it toured the 4 corners of the province. Reincarnating the immortal Piaf, her repertoire, soul and persona, the show assembles the talents of Yann Perreau (stage direction), the magnificent voices of Betty Bonifassi, Marie-Thérèse Fortin, Florence K, Pierre Flynn and Sylvie Moreau, and Yves Desrosiers (musical direction). A timeless encounter with a legend will stop at Théâtre Maisonneuve on March 4th.