Alexandre Trudeau has just published his first book, Barbarian Lost: Travels in the New China. Part travelogue and part memoir, the non-fiction tome made The Globe and Mail’s National Bestseller List the weekend it was released in early September and has received impressive reviews since: “compelling,” “candid,” “great dialogue.” 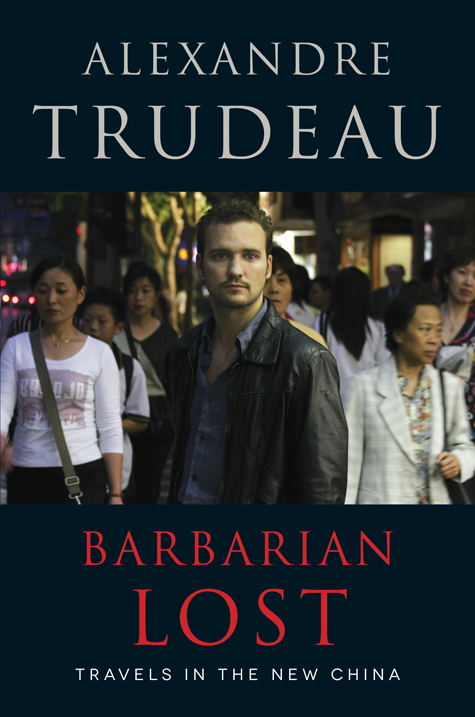 Barbarian Lost: Travels in the New China
became a Globe & Mail National Best Seller on the weekend it was released

Trudeau, 42, is president of Jujufilms and a director of the family’s Trudeau Foundation, both based in Montreal. A graduate in philosophy from McGill University (1997), the author is an accomplished journalist and considers himself a “professional” traveller. His book, consisting of a series of essays about a “random assortment of encounters,” explores a daring question: Is communism still good for China? According to Trudeau, there is no simple answer, of course.

Each chapter in the book centers on a different theme, from politics to religion to family values, culture, history, education, the economy and the environment. At a recent book launch at Westmount’s Victoria Hall, Trudeau (known as Sacha) was clearly in his element, reading from chapter eight (about an awkward visit to a Chinese massage parlour-cum-brothel), firing off memorable one-liners (“Food is China’s religion!”) and taking questions from the audience. “Snake? Not my favorite food,” Trudeau tells the packed auditorium. “I do have my limits.”

While the author shared that his brother, Canada’s Prime Minister Justin Trudeau, read the book prior to his recent state visit to the G20 summit in Beijing, he was also pleased to point out that Justin was the one who has to worry about selling Canadian “canola oil to the Chinese. I don’t!”

While he admires his older brother, the younger Trudeau says he does not think he would make a good politician himself as he does not like compromise nor “to censor myself.” The brothers were born on Christmas Day, two years apart: Justin in 1971, Sacha in 1973. While Justin is said to be outgoing like his mother, Margaret, Sacha is more introverted like his father, former Canadian Prime Minister Pierre Elliott Trudeau. When the brothers do get together they do not talk politics, preferring to joust. 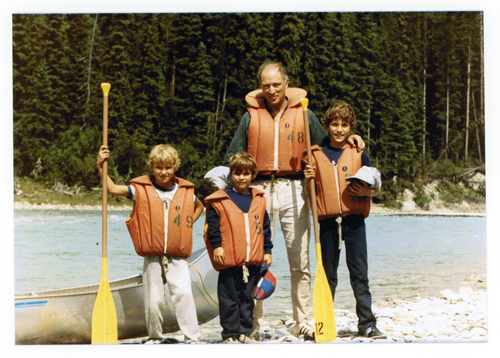 Sacha (left), Michel, Pierre and Justin during a 1982 family canoe trip in the Kootenay National Park

In fact, an incident involving their lifelong sparring is what gave Sacha the idea for the main title of the book: Barbarian Lost. In 1990 Pierre, then retired, visited China with his two elder sons (Justin then 18, Sacha 16), almost one year after the Tiananmen Square massacre. Following a visit to one of China’s historic sites Pierre chastised them both for being too rambunctious, behaving like “barbarians” in the presence of their gracious hosts. “Barbarians!” The reproach eventually led Sacha to believe that being a foreign traveller in a foreign land was a good thing, especially in a place like China, “a country that is so complex, so deep, and where things can’t be taken for granted.”

While Sacha Trudeau considers himself “apolitical,” that might not be the conclusion one would draw from the dozen geopolitical documentary films he has produced, directed, written and/or appeared in between 1998 and 2012: work that took him to world hotspots including Darfur, Liberia, Serbia, the Israeli border and Iraq, where in 2003 he was on the front when Baghdad came under attack.

While the press made a big deal in 2012 that the reclusive Trudeau had joined his brother’s Liberal leadership team, the reaction was tame compared to this March when Sacha publicly supported a controversial deportation case. In a letter to the Canadian Government, the younger Trudeau wrote that he was “absolutely convinced” that Mohamed Harket, an Algerian refugee arrested in 2002 on suspicion of being part of an al-Qaida sleeper cell, “poses no danger to public safety in Canada.” The Ottawa Citizen pounced. “The prime minister’s (well-meaning) brother has directly inserted himself into a case that involves terrorist accusations, contentious security policies … and perhaps changes to Canada’s foreign and human rights policy.” Trudeau, who considers himself a political outsider, remained undeterred, pointing out to Yahoo News Canada that he was not alone in advocating that Harkat finally be freed from house arrest in Ottawa. “I was one of thousands of prominent Canadians petitioning the government to do so.” 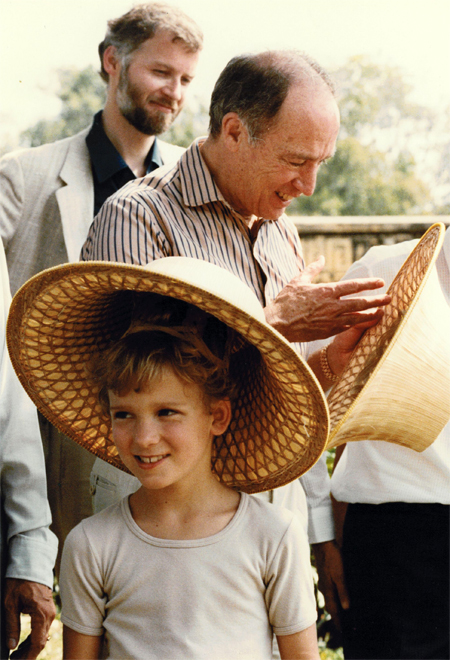 “My father was very much my travel
mentor,” says Sacha, here on a trip to Thailand with his father

Trudeau has made a dozen trips to China, the first, he proudly points out, in 1973 when his mother was pregnant with him. The book, which is dedicated to his wife Zoe, took a decade to complete. He says he wrote it “between film projects” and essentially in “a broom closet” in his home downtown. Trudeau relates how he would sometimes spend up to five hours a day in his “feral cocoon” working on the manuscript, incorporating his own observations and insights. In his experience China, home to 1.4 billion people (almost 20 per cent of the world population) is about “surprises.”

Sacha Trudeau says that his fascination with China began with his father who made two early exploratory trips there: one in 1949, another in 1960. The latter trip resulted in Two Innocents in Red China, a book that his father and Jacques Hébert wrote, detailing their personal experience. “I remember of all the things that might have impressed me about my father, being impressed that he had written a book. How grand and mighty it seemed that my father had his name printed in large letters on the cover of an actual book.” When the publication was republished in 2007 Sacha Trudeau’s insightful 33-page introduction led to an invitation to write his own version about the changes taking place in the political, cultural and economic juggernaut.

When Sacha Trudeau was four years old, his mother described him in an interview as “a bit of a revolutionary, very determined and strong willed.” What Trudeau does recall about his childhood is his father regaling him and his brothers with tales of his worldly adventures (“encounters with pirates and bandits, of his journeys through war zones and wastelands”). As for his own story preferences he had a dislike of fairy tales as a child, a passion for Dungeons & Dragons as a teen, and came to appreciate his father’s persuasiveness to get him to read Crime and Punishment and La condition humaine.

“When my father saw how much I enjoyed being a Dragon Master when I was about 14, those were the two books he selected for me out of his personal library,” recounts Trudeau. “About La condition humaine he said ‘You’re going to like this! It’s full of intrigue, about a political assassination in Shanghai and a group of revolutionaries in China.’ That book, along with Dostoyevsky’s, is what really opened me to the possibilities of great stories.”

When Pierre Trudeau retired as Prime Minister in 1984, he moved to Montreal with his three sons. In 1998 the youngest, Michel, was killed in an avalanche at the age of 23. In 2000, after Pierre passed away, Sacha moved into his father’s Art Deco house. When asked how Montreal has influenced him he quickly offers, “It has made me the free spirit that I am!” 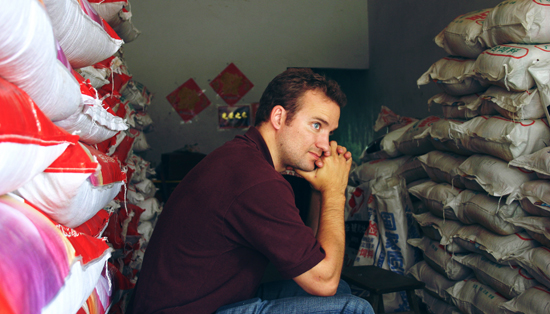 In chapter nine, which Trudeau says is one of his favourite in the book; he interviews contemporary Chinese artist and activist Ai Weiwei (pronounced ‘I-way-way’) in the summer of 2008 while reporting on Chinese culture as part of the CBC’s Olympic coverage. As the two men circled each other in Ai’s studio in Beijing, Trudeau seemed to have met his intellectual match. “Yes, I saw a part of myself in him.” However, Trudeau did not share the “depth” of Ai’s pessimism about China.

Ai, who was then in the process of completing his acclaimed Sunflower Seeds exhibit for the Tate Gallery in London, told Trudeau that the Games were just a “propaganda show,” that China was “corrupt,” “economically flawed” and had to change. He argued that while “China has grown rich,” the central government “knows that the people now need more.”

“Aren’t things getting better and better?” asked Trudeau. “I mean, the government seems to be tolerating the likes of you. This seems an improvement.”

“Yes,” replied Ai. “I’m sitting here being interviewed by the foreign press, saying all sorts of things. Yes, I’m critical. I’m an artist: I say what I see. I have no choice. I have to be truthful. And yes, this is new and different. But we must do better. We’re ready for it.”

Ai’s bottom line? “We have no democracy here. No protection from arbitrary power.”

Democracy in China? In his book Trudeau turns to history and suggests that there has likely “never been democracy or individual rights” in Ai’s country. Trudeau also wonders about the rapidly growing gap between the government and the people, between the peasants in the countryside and the burgeoning urban middle class, not to mention the growing number of billionaires. However, he is convinced that “there will be no revolution.” Only slow transformation.” The way he sees it, China is still “evolving.”

Is Sacha Trudeau, perhaps, an apologist for the Communist Party of China? He openly discusses the question in the book. He doesn’t believe China “could have come so far so quickly without the unity and organizational power” the CPC has provided. “The Chinese story, especially the recent one over the last 30-40 years, is perhaps the greatest success story in human history, in terms of the amount of wealth created.” However, when he thinks of the concentration of power of China’s current leader, Xi Jinping, he asks: “Will Xi’s personal ambition result in an even more repressive China?” In that scenario one is left asking: What of Ai? What price will he have to pay for his (dis) honesty?

Currently in the middle of a cross-Canada tour to promote his book, Trudeau volunteers that writing it was a “transformative” experience. He says he was pleased to discover that he enjoys “the loneliness of the writing, being alone with the ideas in my head,” compared to the dynamic of working as part of a team in film and television.

As for the individual book events, what has surprised Sacha Trudeau is the strength of Trudeaumania across the country. He notes there is; “an intense curiosity out there about my family, which the book seems to be feeding right now.” What he does not yet know is how exactly that will translate into greater appreciation for his work, which would no doubt bolster his personal Trudeau brand.