NEW YORK – There are many reasons to go to New York City, but the extraordinary selection of Broadway productions heads the list. On our most recent trip, we got to see four spectacular musicals: Hamilton, Waitress, The School of Rock and The Color Purple.

Hamilton is without a doubt the biggest theatrical juggernaut to hit Broadway. It was recently nominated for a record-breaking 16 Tony Awards, winning 11 including Best Musical at the award ceremony in June. Tickets are already sold out until May 2017 at the Richard Rogers Theatre at 226 West 46th Street, with an open-ended run beginning in Chicago in the fall. The national tour is set to begin in San Francisco next March.

So what is this show that has every celebrity and talk show host buzzing? Inspired by the biography “Alexander Hamilton” by Ron Chernow, with book, music, and lyrics by Lin-Manuel Miranda and direction by Thomas Kail, Hamilton tells the story of the man on America’s ten-dollar bill, “the ten-dollar founding father without a father.” An orphan immigrant with a talent for writing, Hamilton lived a full and dramatic life, playing a major role in the American Revolution and acting as the first Treasury Secretary of the United States. In hindsight, a hip-hop musical seems like the perfect way to tell his story.

The show opens with the song “Alexander Hamilton,” which tells of Hamilton’s upbringing in the Caribbean and his arrival in New York City, summarizing the first 100 pages or so of Chernow’s biography. It quickly becomes clear that hip-hop truly is the only style that can adequately showcase Hamilton’s genius and gift with words.

Hamilton’s genius is reflected in the musical’s creator, Lin-Manuel Miranda, who also played the role of Hamilton until recently. For his work on Hamilton, Miranda was awarded a Genius Grant from the MacArthur Foundation as well as the 2016 Pulitzer Prize for Drama along with many other accolades. First Lady Michelle Obama has seen the show twice, calling it “the best piece of art in any form I have ever seen in my life,” an opinion I have to agree with myself.

As the show has been running for over a year at this point, many cast-members have decided to move forward, leaving room for a new cast of talented actors to take their places. While the original cast is incredibly talented, as evidenced by their multiple Tony Award wins, the show is special enough that it stands on its own and doesn’t rely on any one actor to carry it forward.

Javier Muñoz, our new Hamilton, is not so new to the role. In fact, he was Miranda’s alternate; performing the role two shows a week for the past year. His performance takes inspiration from Miranda, while simultaneously making every word his own.

The show breaks boundaries and poses questions relevant both to Hamilton’s story and to modern day. At a time when Hollywood’s diversity has been under fire, Hamilton features people of color as America’s founding mothers and fathers. At a time when the debate on gender equality is escalating, Miranda features and empowers the women often forgotten by history. Do we place enough value on immigrants and their potential to shape our countries? Do our history books always give us the full, unbiased story? What does it mean to leave behind a meaningful legacy?  Now used as a teaching tool in schools, Hamilton’s central questions engage students in a whole new way. History has never been so much fun. 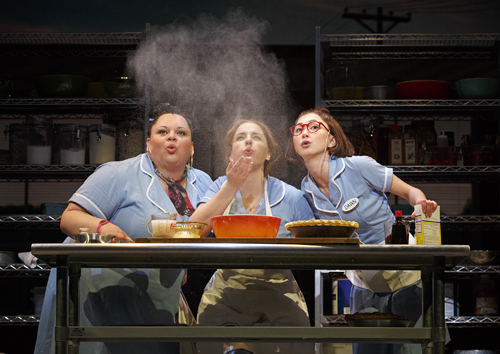 Waitress is a musical based on the 2007 cult Indie movie starring Keri Russell, showing at the Brooks Atkinson Theatre (256 West 47th Street, between Broadway and Eighth Avenue).

The storyline revolves around Jenna (Mueller), a waitress and expert pie maker stuck in a small town and a loveless marriage. Faced with an unexpected pregnancy, she fears she may have to abandon the dream of opening her own pie shop forever… until a baking contest in a nearby county and the town’s handsome new doctor offer her a tempting recipe for happiness.  Supported by her quirky crew of fellow waitresses and loyal customers, she summons the secret ingredient she’s been missing all along – courage.

Even before seeing this show, I knew that it was full of promising ingredients. The catchy music and lyrics were written by five-time Grammy Award-nominated singer songwriter Sara Bareilles and the direction was done by Tony Award-winner Diane Paulus. Waitress is also the first Broadway musical with an all-female creative team.

Yes, the show will make you hungry for pie. The delicious-looking pies on both sides of the stage, featured in tall glass freezers, along with the ones integrated into the story, will make you hungry enough to buy some pie from the vendors. Each pie is sold in a small jar at $10 each with the phrase “it only takes a taste,” also the title of a song from the show, written on top.

While pie is prominently featured, the real star is Jessie Mueller, winner of the 2014 Tony Award for Best Actress in a Musical for Beautiful: The Carole King Musical. Mueller elevates an already excellent show with the quality of her performance, for which she was nominated for a Tony Award this year.

Mueller is nothing short than fabulous to watch. She made her Broadway debut opposite Harry Connick Jr. in On a Clear Day You Can See Forever, for which she received Tony Award and Drama Desk nominations.

When I saw the movie Waitress, it reminded me of the movie Alice Doesn`t Live Here Anymore and the TV show Alice. This is likely because at the diner where she works, Jenna, like Alice, has two interesting co-workers.

Becky (Keala Settle) is strong and full of funny quips. Dawn (Kimiko Glenn from the popular Netflix series “Orange is the New Black”) is an awkward girl who unexpectedly finds love with an odd man named Ogie, played hilariously by Christopher Fitzgerald. Fitzgerald won a Drama Desk Award and was nominated for a Tony for his performance, including his show stopping number “Never Ever Getting Rid of Me”.

Despite some over-the-top moments, the characters are all relatable in some way or another, particularly our main character, Jenna.  From the moment the curtain rises, when Mueller belts out the fabulous and catchy song “Opening Up”, you are immediately hooked. Having seen the movie, I wondered how they would adjust the storyline to include music. Well, songwriter Sara Bareilles did a magnificent job. The show is two and a half hours, with intermission, and it rolls by quickly.

Producers have announced a national tour of the show will kick off at Cleveland’s Playhouse Square in October 2017. No word on whether any of the stops will be in Canada. Info: www.waitressthemusical.com

-with files from Alexandra Cohen