Just For Laughs will team up with one of Montreal’s biggest stars and most commendable citizens, P.K. Subban, for a night of hilarious comedy for a great cause. All proceeds raised by the P.K. Subban Foundation for this charity gala will be donated to the Montreal Children’s Hospital Foundation.

P.K. Subban is an all-star NHL defenseman for the Montreal Canadiens, and doubles as a philanthropist, entrepreneur and style icon. As founder of P.K.S.S. Management, Subban has become one of Montreal’s most followed athletes, with a reach of over two million people across his social media platforms. P.K. Subban’s All-Star Comedy Gala, will feature a lineup of hilarious comedians, which will take place on August 1, 7 pm, at Salle Wilfrid-Pelletier in Place des Arts.

Following 11 sold-out performances at last year’s Just For Laughs Festival, Montreal favourite Sebastian Maniscalco is back to host his own gala. Sebastian’s specialty has always been to say what we’re all thinking, except he’s got a knack for making it hysterically funny. Sebastian’s televised multi-comic gala, Sebastian Maniscalco Are You Serious?!? Gala, will be one of the hottest tickets of the summer and will take place on July 29, 9:45 pm, at Salle Wilfrid-Pelletier in Place Des Arts. 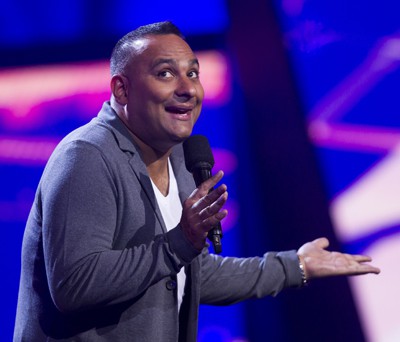 OH, HELLO  New York’s (America’s) finest thespians, Gil Faizon (Nick Kroll) and George St. Geegland (John Mulaney) will bring OH, HELLO to Montreal July 28-30, 9:30 pm, at Le Gesù as part of the National Bank Theatre Shows. The duo that has captivated American audiences with their hit prank show Too Much Tuna and the sold-out tour of OH, HELLO on (off) Broadway will present three performances this summer. OH, HELLO is a critical darling and a New York Times Critic’s Pick – Ben Brantley says fans will be “blind drunk on their own laughter” – while the New York Post declares, “To say it’s the funniest show of the year is selling it short.”

Russell Peters has no shortage of accolades. In 2010, he performed The Green Card Tour Live from the O2 Arena, which went on to set a UK attendance record for a one-off comedy show with over 16,000 fans in attendance. And in 2013, he became the first comedian to create a Netflix Original Comedy Special, Notorious, which became a global success. Russell joins Howie Mandel as a special guest on The CW network’s Howie Mandel Gala, Friday July 29, 6:30 pm, at Salle Wilfrid-Pelletier in Place Des Arts. Tickets are selling fast to this incredible multi-comic Videotron Gala presented by Air Canada!

With all new benefits, including free tickets and exclusive pass holder zones onsite, the best offer of the Festival returns with the Just For Laughs Festival Passes. Grab the 2-Show Pass for only $99.99, the 3-Show Pass for $139.99, the 5-Show Pass for $215 or the new VIP festival pass for $300.