You can’t say Naples without saying… Pulcinella! It was in Naples that this commedia dell’arte character lived.
A hilarious blend of the irresistible music of Pergolesi and the lost art of burattinaio (puppetry), this show was an audience favourite at the Cité de la Musique in Paris and recently toured Sicily.

In connection with the Pompeii exhibit.

A shorter version (50 minutes in length) of this event is also presented in the
Family Weekends series at 11 a.m. the same day. 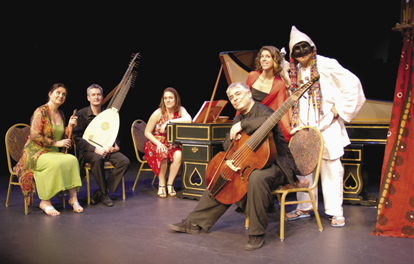 Pulcinella, la Libertá ritrovata, or how Pulcinella, our noisy, impolite and far from politically correct hero, leaves Stravinsky’s masterpiece to seek his commedia dell’arte origins in his native Naples, accompanied by the music of Pergolesi. With his gigantic nose, his hunched back and his large belly, he draws laughter from young and old.

In French
Length: 50 minutes without intermission
For ages 7 to 77