Fragments of Humanity. Archaeology in Québec

See the first major exhibition entirely dedicated to Quebec archaeology. Over 350 significant pieces to explore — several of which are being taken out of Quebec’s archaeological reserve for the very first time — providing a snapshot of 50 years of archaeological discovery in Quebec. 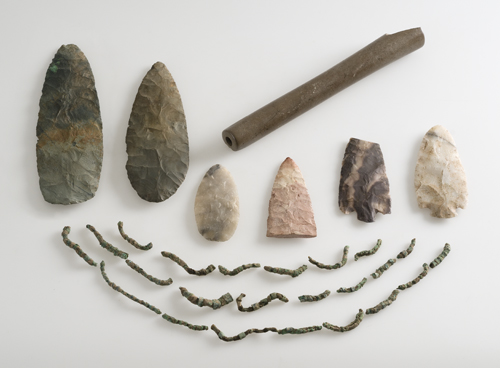 Offerings – When Champlain Boulevard was being built in 1966, workers discovered an ancient burial site containing several arrowheads and fragments of a necklace made of leather and native copper. © Jacques Beardsell

According to Francine Lelièvre, Executive Director of Pointe-à-Callière, “the artefacts excavated from the earth help define who we are and where we come from; they are parts of our collective legacy, our heritage.

The exhibition looks back at the events and ways of life behind fragments of humanity that, each in their own way, reveal various facets of our heritage. Highlighting the richness and diversity of Québec’s archaeological collections, the exhibition is divided into four thematic sections.

The first part of the exhibition is dedicated to the era preceding the Europeans’ arrival on Quebec land. Through archaeological discoveries, it has been possible to confirm that small groups of men and women had already trod upon Quebec soil some 12,000 years ago. Here, visitors look back in time through tools and objects used by the Amerindians and Inuit. They will explore how these people adapted their instruments to the resources available in their environment to provide themselves with food and shelter, to travel, to defend themselves, and to trade with other indigenous peoples.

Discovering: a land of trade and commerce

The next section of the exhibition is devoted to trade between Europeans and Amerindians, and to commercial activities carried out on Quebec land beginning in the 16th century. The Basques, Normans, Bretons, and French, drawn by such natural resources as marine mammals and cod, set up facilities along the banks of the St. Lawrence in order to exploit its assets. The artefacts found among the remains at dozens of archaeological sites also underscore the increasing number of trade areas and, starting in the 17th century, the development of local industries. Fishing tools, munitions, weaponry, coins, and other items of trade found on the sites of trading posts, forts, and the king’s stores are concrete examples of the meeting of peoples who socialized and mixed with each other in trade… or in competition. 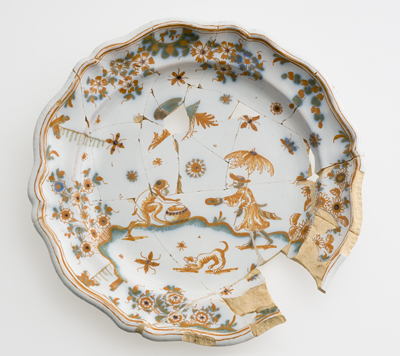 Visitors are then invited to take a look at daily life in the 18th and 19th centuries, filling the void left by written documents. The theme is approached from three angles: food and the culinary arts, hygiene, and games and toys. An examination of found objects provides insight into our ancestors’ private lives, allowing us to consider changes in mindsets, practices, and styles. For example, while gatherings around the table among the upper-class in 18th century Quebec City and 19th century Montreal are characterized by abundance, objects found in more modest milieus suggest a simpler diet in which soup was very popular!

Several hygiene items found among the remains—such as chamber pots, lice combs, shaving basins, and toothbrushes—indicate that the practice of “dry bathing” was quite widespread: the elite, while decked out in fine clothing, only gave a cursory cleaning to the visible parts of their bodies. A number of medicine jars, bottles of alcohol, mineral water, and milk of magnesia have also been found, and show that the preparation of home remedies was a common practice. Lastly, evidence of 19th century industrialization can clearly be seen in games and toys that have been found, mainly in more affluent areas. 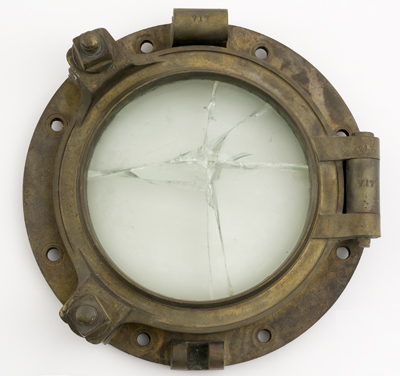 Bringing to light: stories from the depths

Subaquatic archaeology is featured in this exhibition, with the remains from six shipwrecks on display: the Elizabeth and Mary, the fleet of Major General Amherst, the Machault, the Auguste, the Empress of Ireland, and the Lady Sherbrooke. The last of these, owned by brewer John Molson, was one of the first steamships in Canada. It linked Montreal to Quebec City in 14 hours, and had three first class cabins for women.

Several objects in the exhibition are being presented to the public for the first time. Some have even been restored specifically for the exhibition, notably some earthenware jars found in the Basque sites on Petit-Mécatina Island on the Lower North Shore, and objects relating to Amerindian funeral rites. These include the offerings from the first Amerindian grave to be brought to light in Quebec during the refurbishment of Champlain Boulevard, in Sillery, in 1966.

Without a doubt, the highlight of the exhibition is a dugout canoe made out of a single piece of wood, which was found in a lake in the Lanaudière region in the mid-1980s. Discovered by amateur divers, the 15th century dugout required special care to be properly preserved and to prevent it from deteriorating after having spent 500 years below the water’s surface. There are only about ten surviving prehistoric Amerindian dugout canoes in Quebec, but none is in as fine a condition as that on display at Pointe-à-Callière.