What if Anne Frank had survived, and published her own story?

Sara Farb is starring as Anne Frank in The Secret Annex, a fantasy ‘what if’ production based on the hypothesis that Anne, her sister Margot and friend Peter had all survived the war and moved to the borough of Brooklyn in New York City in the 1950s. Anne’s ambition is to publish her diary and to tell her war-time story of survival.

Director Marcia Kash has told Anne Frank’s story on three occasions, having directed The Diary of Anne Frank, and notes; “The Secret Annex brings Anne Frank to life in a different way. Anne is portrayed as a grown-up woman… a survivor… a woman in pursuit of her dreams. Whilst it is a fantasy, it raises many questions about the value of a life and the cost of survival. It’s a delicate, human piece; one that inspires and helps us to believe that there is meaning and purpose to every life.”

Sara Farb performed the role of Anne last summer at the Stratford Festival’s production of The Diary of Anne Frank; “As an actor, it’s a great opportunity to replay the same character within a different play. Anne represents hope, and her diary is a beacon for all those lost souls.” Continuing, Sara states; “I’m sure there were other young people who kept diaries, but it was Anne’s that was found, and has proven to be such an inspirational gift.”

In the scenes previewed for the press, Sara’s portrayal of Anne as an energetic and optimistic young woman was enthusiastic and genuine. Within minutes she became Anne for the theatre writers and critics. Her performance was such the journalists and camera operators broke into applause – an unusual occurrence during press previews. 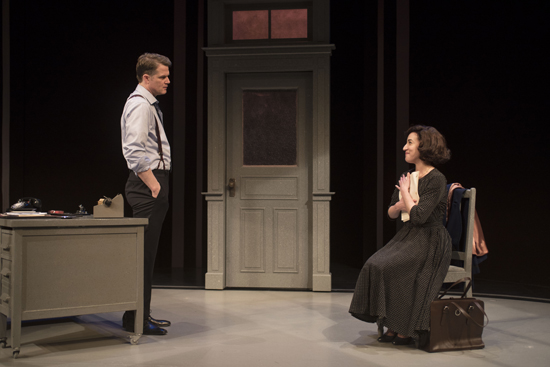 Marcel Jeannin is well-cast in the role of Michael Stein, who hires Anne to work as his company’s receptionist – even though Anne can’t type and is hopeless at math. “Anne’s identity was defined by those two years that she and her family spent in that attic – and the shadow of what happed to them and to millions of others hangs over the play, but in a reverential way. With this play, we are revering Anne Frank, her work and the person who became the symbol of the millions who perished in The Holocaust.”

Marcel is an accomplished actor who is constantly working in plays, television and film, and his acting capabilities and stage presence always bring a sense of authenticity to his scenes. Segal audiences will remember him from his role last season’s production of The Graduate.

The Secret Annex is being produced with the support of The Montreal Holocaust Centre, which in itself is an endorsement of the play’s treatment of Anne Frank’s diary. There is what may seem to be an obvious question; that I posed to Marcel Jeannin. “Is this play disrespectful to those millions who lost their lives in The Holocaust?” Marcel said “The shadow of what actually happened hangs over the play – but in a reverential way.”

The Secret Annex continues at The Segal Theatre until February 21. For tickets please call the box office: 514-739-7944 or online: www.segalcentre.org