Ski, hike, dance – or just plain relax and take in the view –
at the Omni Mount Washington Resort, a century-old classic

High in the White Mountains of northern New Hampshire is one of the continent’s great old mountain hotels, the Omni Mount Washington Resort, just three hours from Montreal on the road many summer vacationers take to the Maine coast. It’s the enormous red-roofed hotel with white walls you pass on the left before U.S. Route 302 descends into Crawford Notch, one of a half-dozen passes through this rocky section of the Appalachians. The setting is dramatic, with 6,300-foot Mt. Washington, the highest peak in the northeastern United States, and the accompanying Presidential Range as the backdrop.

The five-storey building’s signature features are two octagonal towers, capped in red, and a 900-foot-long verandah with plenty of width and ceiling height to afford stunning views of Mt. Washington, even from chairs against the back wall. But the hotel’s biggest charms are inside. The enormous and gracious lobby will elicit a gasp from the first-time visitor, and the other ground-floor great rooms (the main dining room and the ballroom) are similarly grand. 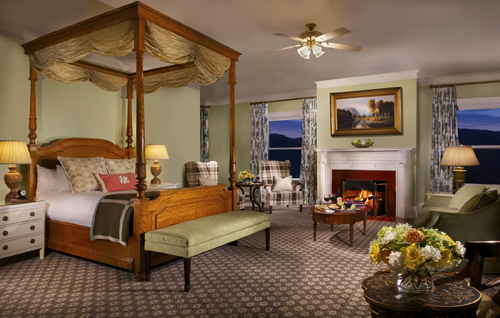 The choice of accommodations ranges not simply according to degree of square footage and amenities but by shape and character. The standard rooms are anything but, with ceilings in excess of 10 feet and stunning views of Mt. Washington. There also are tower rooms, corner rooms, family rooms and suites, some in excess of 1,000 square feet. And, true to the hotel’s past as a summer home for the wealthy, a block of rooms forms an apartment that can house an extended family.

Accommodation within the resort also is available in the nearby Omni Bretton Arms Inn and the Lodge at Bretton Woods, as well as in townhouses. They are connected by shuttle buses, which also will take guests to the ski area and golf clubhouse. Another transportation choice is one of several Volvo sedans and SUVs, available on loan from the concierge desk for up to a day, offering the ultimate test drive on mountain roads.

Built in Spanish Renaissance style at the turn of the last century by mining and railroad magnate Joseph Stickney, the Mount Washington Hotel’s ornate architectural features are the work of 250 Italian masons and woodworkers. Stickney previously had operated the nearby Mount Pleasant Hotel, but decided to build a new and larger hotel to take better advantage of the mountain panorama. Opened in 1902, the Mount Washington Hotel was also a technical marvel, with innovative heating and plumbing systems and its own telephone system. For its first half-century, the hotel catered to wealthy families from Boston, New York and Philadelphia – and Montreal as well – who would stay a month or often longer, escaping the city heat. Easily accessible by train from major cities in those days, husbands/fathers would join their families on weekends. As many as 50 trains a day came and went from the three railway stations that served Bretton Woods in those days. 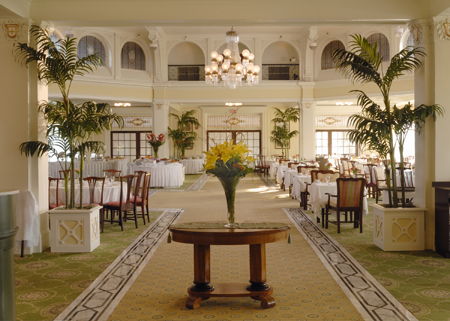 Celebrities were frequent visitors, including Thomas Edison and three U.S. presidents. But the hotel probably is best known as the site of the 1944 International Monetary Conference that saw representatives of 44 countries set a standard price for gold and adopt the U.S. dollar as the world’s benchmark currency. The conference room used for these meetings, known as the Gold Room, has been preserved. The property is a U.S. National Historic Landmark.

At the center of the hotel’s historic lore is the “presence” of Carolyn Stickney, Joseph Stickney’s wife who owned the hotel for three decades following his death just a year after the hotel opened. Known as “The Princess” after she was remarried in 1910 to a French aristocrat, Carolyn would observe the guests in the main dining room from a mezzanine above, and would upgrade her choice of dress to ensure she was the evening’s best-dressed woman. Her table was located just by the dining room entrance, and it remains in that place today, set for one in anticipation of her return.

Hotel management makes no claims of Carolyn’s ghost being present, but, as with most century old hotels, there have been reports of phantom images in the lobby and halls. But one thing is certain: you can book the Princess Carolyn Room and be left alone in peace for a wonderful sleep in the pristine mountain air. 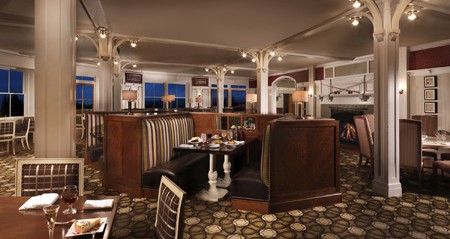 The 200-room Mount Washington Hotel is one of several lodgings on the resort property. Additional accommodation is available at the nearby Omni Bretton Arms Inn, the Lodge at Bretton Woods and the Townhomes at Bretton Woods. Guests at all location have a range of dining and beverage choices. The Mount Washington Hotel includes the main dining room, Stickney’s, the Rosebrook Bar, the Princess Room and The Cave nightclub. Nearby are the Bretton Arms Dining Room and Wine Bar, Fabyan’s Station and The Grill, as well as Latitude 44 and other eateries at the base of the ski area. 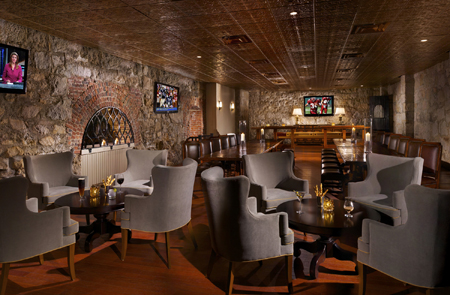 The resorts’ kitchens are outstanding, with the main dining room providing the classic resort hotel gourmet experience with mountain views and live entertainment. Downstairs, Stickney’s offers more casual atmosphere and fare, and The Cave is the place to go for an after-dinner digestif and dancing. A buffet breakfast is served in the main dining room or at the Bretton Arms, and can be packaged into a room rate as a reasonable extra.

The property became part of the Omni luxury-hotel chain in 2009. This coincided with the opening of the Presidential Wing, which houses a luxury spa and 30,000-square-foot conference centre along with other upgrades and renovations throughout the property. The guest experience is a wonderful blend of old world luxury and modern comfort. As grand as the lobby and other public spaces are, though, a laid-back atmosphere prevails. This is enhanced by the staff, who in addition to excellent task skills also are trained to go out of their way to interact with guests. Our waiter in Stickney’s restaurant, for example, in addition to providing attentive service, provided a succinct rundown on the various hiking trails in the area, his advice tailored to the weather restrictions of early November. 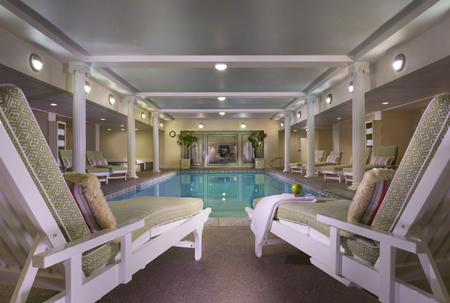 Unwind after a day of outdoor activities in the
indoor pool

The hotel operated on a three-season basis until 1999, when it went opened for its first winter, and now is a unique winter vacation venue. The big draw is the adjacent Bretton Woods Ski Area, with 188 hectares of ski terrain New Hampshire’s largest ski centre, with four high speed quad chairlifts and six other lifts servicing 62 trails and 35 glades, from family-friendly cruiser runs to challenging steeps. The center has been ranked no. 1 in the U.S. East for trail grooming by Ski magazine. Limited night skiing is offered on weekends.

The Bretton Woods Nordic Center offers 100 kilometres of cross-country ski trails, most of it groomed for both classic and skate styles, and also accommodate snowshoeing. Other on-site winter activities include, skating, tubing, rock climbing, dog sledding, zip-line/canopy tour, and sleigh rides. Guided ski and snow-shoe tours, on trails and in the back country, are available as part of the resort’s guided winter adventure program.

How to get there: Omni Mount Washington Resort is about three hours southeast of Montreal, via the Eastern Townships Autoroute (A-10 east) to exit 121, then A-55 south to the Vermont border at Stanstead/Derby Line, where A-55 becomes Interstate 91. Follow I-91 south for 105 kilometers, past St. Johnsbury, VT, to exit 19 on to Interstate-93 south. Follow I-93 for 38 km past Littleton, NH, then take exit 40 onto US-302 east toward Bethlehem, NH. Follow US-302 for 37 km through Bethlehem and Twin Mountain to Bretton Woods. Omni Mount Washington Resort is on your left.

Ride the railway to (nearly) the moon

Many visitors to the Omni Mount Washington ride the cog railway to the great mountain’s 6,288-foot summit. The base station is a 10-minute drive from the resort. Open from May to November, the 147-year-old line, on which specially designed biodiesel-powered locomotives (as well as some original steam-powered engines) push antique coaches up the mountain’s western flank. The cog system allows the locomotives to ascend – and safely descend – grades as steep as nearly 38 degrees. (Normal railway grades generally are less than five degrees).

The round trip takes about three hours, including an hour at the summit, where you can have a coffee and a snack at the visitor’s centre, or mail a postcard with a Mt Washington postmark. The summit, which also is accessed by the Mount Washington Toll Road up the eastern side, is home to a National Weather Services observatory, which operates a weather museum during the summer months. It’s an interesting exhibit, covering not only the history of the observatory but the weather itself. Wind gusts in excess of 300 kilometers per hour have been recorded at the summit, and sustained hurricane-velocity winds of 120 km/h are recorded on at least half of the days of the year. It’s chilly up there, too. The record “high” is 24 degrees Celsius, and typical mid-summer temperatures are in the neighbourhood of 10C to 15C. So be sure to dress for the occasion.

Needless to say, the views on a clear day are out of this world, with the Atlantic Ocean occasionally visible 120 kilometres to the southeast. Before or after the train ride, take a few minutes to visit the fascinating museum at the base station, which details the railway’s history. New Hampshire native Sylvester Marsh began planning the railway in 1952 after he lost his way climbing the mountain. Critics thought he “might as well try and build a railway to the moon” – but nearly a century and a half later, thousands of riders a year have justified his feat of engineering.