The Emerald Isle’s engaging patchwork of ancient castles, unique historic sites, quaint towns and a wildly splendid landscape is vastly enriched by a history riddled with
folklore and fanciful legends.

I swear there’s no place on earth quite like this indomitable country that survived the worst famine in history, years of violent sectarian strife and periods of crushing economic turbulence. Moreover, it was not the luck of the Irish that overcame the hard times. Instead, it was the inimitable Irish spirit and love of country – enduring characteristics that remain to this day. Visitors to this small green isle separated from Britain by the Irish Sea likewise find there is plenty to love. Explore any part of it from Dublin to Derry, Limerick to Belfast, or Galway to Tipperary and the captivating nature of the place is spellbinding.

Prime examples among the island’s 32 counties are County Kerry and County Cork with both providing a deep and abiding sense of Ireland and Irish culture. Lying in the southwest corner of the country, each is rimmed by the Atlantic Ocean and features some of the island’s most arresting seascapes. Both counties are part of a 1,553-mile-long coastal route recently dubbed the Wild Atlantic Way, a stretch that runs from County Cork north to the top of the country. The blue sign-posted circuit can be done in part, or in its entirety, and while the route generally follows the coastline there is plenty of diversionary towns and villages along the way, together with some of Ireland’s most famous landmarks. 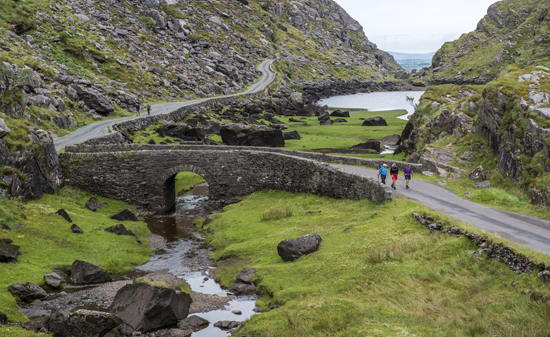 There’s a quote from an unknown author that pretty much sizes up the place: “Any Kerryman will tell you there are only two Kingdoms, the Kingdom of God and the Kingdom of Kerry. One is not of this world and the other is out of this world.” A host of attractions tends to back up the claim.

One of the premier features is the renowned Ring of Kerry, a 110-mile drive around the Iveragh Peninsula. In high season, behemoth tour buses run non-stop; however, self-drive rental cars provide ample opportunities to get off the beaten track for a less structured experience. The Ring tours begin in Killarney, a pleasant touristy town with nearby attractions such as 14th century Ross Castle, a typical stronghold of an Irish Chieftain during the Middle Ages. Surrounded by Killarney National Park, Muckross House is a neo-Gothic mansion where Queen Victoria was once a guest. Both the house and gardens feature the opulence enjoyed by the aristocracy of the period.

In stark contrast The Kerry Bog Village, a nearby outdoor museum renders an absorbing insight of how Irish peasants lived and worked during the 1700s when simple survival was a daily grind. Displays include several thatched-roof cottages that once housed large families (and often their animals) in a very small space with only peat fires providing a modicum of warmth.

What’s a trip to Ireland without seeing a traditional sheep farm? Southwest of Killarney, Kissane’s Sheep Farm is a 150-year-old Irish family-run operation that offers fascinating demonstrations showing the intricate relationship between sheepherder and sheepdog with the canines displaying their amazing ability to herd flocks in whatever direction is commanded. There are also sheep shearing exhibitions and an inspiring talk about the role sheep farming has played in Ireland’s history. Kissane’s is the kind of visitor attraction that elicits a genuine sense of Ireland where everything about the farm is the real deal. 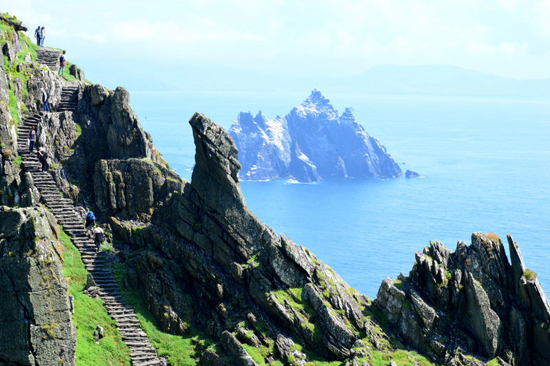 County Kerry overflows with things to see and do; however, there is a particular one that should not be missed: the famous Skelligs – two jagged rock islands that rise from the sea about ten miles off the western point of the Inveragh Peninsula at Portmagee. The larger of the two, Skellig Michael, served as an isolated monastery where early Christian monks managed to survive on this inhospitable site from the 7th to the 13th Century. With rock cliffs towering 700 feet above the sea and almost the entire surface composed of craggy rock, George Bernard Shaw had this to say about Skellig Michael, “…the thing does not belong to any world that you and I have ever lived and worked in: it is part of our dream world.”

Today, Skellig Michael is a UNESCO World Heritage Site and an internationally renowned site for breeding sea birds. Weather permitting, regular boat trips take visitors to the island where, in order to view the monastic settlement and its centuries-old buildings, there is a demanding climb up 618 stone steps rising more than 600 feet from the landing zone. Anybody with health or mobility issues should not attempt the climb. For people unable to physically navigate the island there is an excellent Skellig Experience Centre on Valentia Island with plenty of exhibits, history boards and video presentations. (Valentia Island is bridge-connected to the mainland at Portmagee).

This southwest county that shares a border with County Kerry is blessed with a splendid landscape of mountains, glacial lakes, lowlands, beaches and sea cliffs – stunning to view and equally impressive to explore. Beginning just five miles from Cork City the 5th Century Blarney Castle and the ritual of Kissing the Blarney Stone has a worldwide reputation. Some may regard the whole experience as tourist trappings but the ritual alone has made it the most famous visitor site in the Cork region. The legendary powers of the stone that has been kissed by millions around the globe are said to deliver the gift of gab and yet another less verifiable legend gives the kisser free range to tell fibs for seven years. 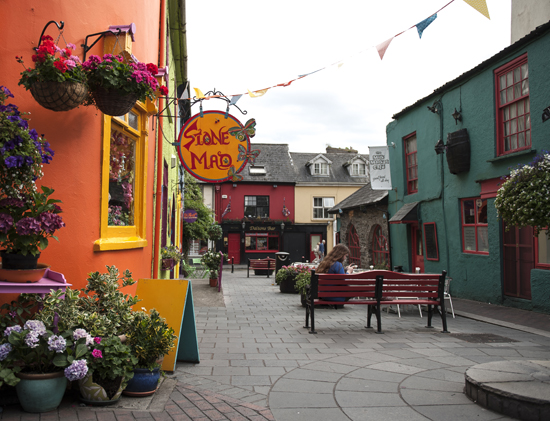 Shops and pubs in Kinsale, also famous for its Oak Head Golf Course

Lying 17 miles south of the city, the picture-perfect town of Kinsale is clustered around one of the most protected bays on the southern coast. It’s a popular community that buzzes with activity for several reasons including blue shark fishing, golf at the town’s legendary Oak Head Golf Course and tours of Desmond Castle, a 15th century tower house once used as a French prison where it’s said ghosts of inmates that died in a 1747 fire there are purported to haunt the place. Kinsale also has a far flung reputation for some of the best cuisine anywhere in the country with some referring to it as the Gourmet Capital of Ireland.

The westerly coast town of Baltimore and its 13th Century Baltimore Castle has an interesting history. In the early 1600s it was a notorious pirate base where almost the entire population was involved. It was said that all the women of the town were either wives or mistresses of pirates. The privateers are long gone but the castle survives due to the efforts of a local couple who, at their own personal expense, took on the challenge of restoring the crumbling building. Today, tours of Baltimore Castle include a pirate exhibition that details the town’s pirate history.

Cork City is the heart of the county that warrants at least a day of exploration. It’s a typical large Irish town with several museums, a plethora of pubs, theatre, art galleries and shopping to rival Dublin. One of the main visitor attractions is the English Market visited by Queen Elizabeth II in 2011 where a plethora of vendors offer products from around the world although the site is best known for its local produce, meat, fish and the Farmgate Restaurant where diners can expect some of the finest and freshest cuisine in the city.

Travel Information
Getting there: Aer Lingus, Ireland’s National Airline, offers year-round daily service between Toronto and Dublin. Travellers can connect with the Toronto/Dublin flights from 12 Canadian cities including Montreal, Vancouver and Calgary with onward connections to more than 20 cities in the UK and European.

Best Value: Consider the spring and fall shoulder seasons for potential deals on everything from hotels to attractions.