Canada’s grandest hotels are a half century or older, and many have undergone remakes that have renewed their grandeur and also adjusted to the needs of their 21st century patrons. Fairmont Hotel Vancouver now is at the top of the list, the grande dame of Vancouver’s hotels, and one of four Fairmont properties in the booming west coast metropolis. The others – Fairmont Pacific Rim, Fairmont Waterfront and Fairmont YVR Airport – have contemporary niches, while Fairmont Hotel Vancouver continues to serve travellers who prefer the traditional, historic city hotel with its marquee downtown location, older-world elegance and connection to the last century’s golden age of rail.

The 550-room hotel’s main floor has undergone a major remake, marrying its traditional elegance with contemporary panache. The reception area has been moved to a more efficient location near the south entrance’s enlarged breezeway, with elevators nearby. The bulk of the space has been given to high-end designer boutiques, including a two-storey Christian Dior store, the elite designer’s first stand-alone outlet in Canada. Across the hall is a new Louis Vuitton store, and down then hall you’ll find other designer boutiques including Gucci and St. John

The hotel’s stunning new centerpiece, though, is the new Notch8 restaurant. Fairmont has managed to introduce a chic contemporary look yet respecting and even blending in traditional, railway-related design elements. (“Notch 8” is a term for full power on a railway locomotive.) The menu definitely makes the vast restaurant – it boasts a number of distinctive seating areas – a go-to spot in Vancouver’s busy gourmet gastronomic scene. This, of course, is the idea across the Fairmont chain, where the traditional multi-eatery hotel concept is being replaced by food services centered on a single, outstanding restaurant.

Notch8 opens on to the main floor’s central promenade. One enters through an allée that takes the arriving guest between dining areas to an imposing new railway-themed bar, backstopped by old train photos surrounding two huge mirrors that, with the click of the bartender’s remote, magically become giant television screens. The surrounding bar area features wingback and other upholstered chairs, some with leather hand straps on the backside, evoking old railway coach seats.

The design and decor is only the beginning, however, as the real adventure begins when you open the cocktail menu that features a uniquely fantastic selection of martinis, daiquiris and other classic drinks. Can’t decide between a Sage Maragarita, Maple Hickory Old Fashioned and a Moneypenny’s Vesper (a fabulous gin-vodka martini with dashes of cranberry and of Lillet Blanc)? The drink designers have borrowed a tool from the investment analysis industry and created a “scatter chart” for cocktails. The chart’s “north-south axis” is labelled Fruity & Sweet at the top end and Dry & Bitter at the bottom, with Rich & Booze Forward and Citrus Forward at the left and right extremes. A dot for each cocktail is placed within the quadrants as appropriate. A gimmick, perhaps, but a fun and useful one!

In addition to the main dining area in front of the bar/lounge, there are several private banquette nooks with drape valances – reminiscent of sleeping car-berths – and a long island that serves as dining or bar seating, or a buffet serving centre (with heat/cooling elements embedded in the stone surface). Beyond is a softly lighted library dining room that has as a cognac and cigar lounge atmosphere – yes you can enjoy a fine cognac there, but no cigars! This area serves as a private event space or a supplementary dining area.

We recently enjoyed a Saturday lunch at Notch8, returning to Fairmont Hotel Vancouver for a follow-up to our visit a year earlier when the renovations were in full swing. At that time, the historic Roof restaurant on the 15th floor had been returned to its former role as the hotel’s main dining room, following the closing of the former main-floor restaurants, Griffins and 900 West, to make way for Notch8.

The Roof has returned to its role as an event venue, in addition to the second-floor Pacific and British Columbia ballrooms and 15 other rooms for meetings and social gatherings. The Roof continues to play a daily restaurant role, hosting the city’s marquee afternoon tea, “Tea at the Top”, featuring Fairmont’s fine tea blends, panna cotta with fresh berries, finger sandwiches, scones and sweet treats from the hotels pastry shop. 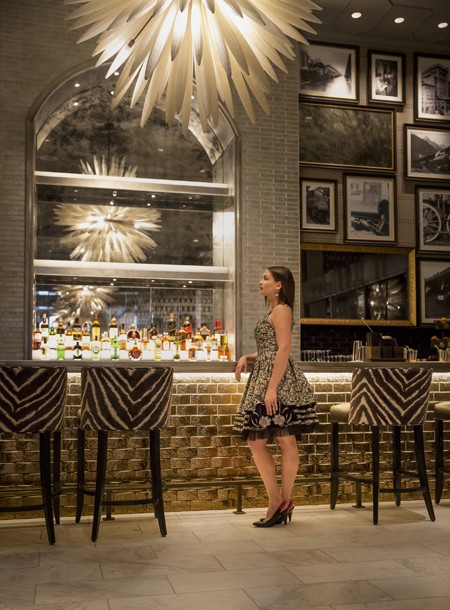 On this day, however, the job at hand was to sample the wonders of Notch8. We sampled several of the signature cocktails before tucking into a lunch of menu items, the names of which might seem routine if ordered at the corner coffee shop – but each a gourmet delight in its Notch 8 interpretation. The fish and chips were battered halibut cooked in a light and lean batter, accompanied by hand-cut french fries, sunflower slaw and remoulade. The Caesar salad was garnished with ciabatta croutons and parmesan reggiano, and accompanies by tiger prawns. The rotisserie turkey club sandwich was served on artisan loaf, while the chop salad was a gourmet concoction laden with Roaring 40s Bleu dressing.

As an appetizer, the Notch8 Chicken soup is not to be missed. And don’t forget to order a loaf of Notch8 Signature Bread, made with stout beer, comte cheese and mustard seed.

These delicacies were washed down by a bottle of Blasted Church pino gris from the Okanagan.

Among the restaurant’s other notable starters are a daily selection of oysters on the half shell and roasted San Marzano tomato soup, and the Notch8 Salad (organic leaves, heirloom vegetables, rhubarb, and burnt-honey vinaigrette). Standing out among the main course offerings were B.C. Hot Pot (salmon, halibut, sable fish, clams and mussels), Morel Mushroom Tagliatelle (sweet-pea pistou, tomatoes, pea tendrils and pecorino romano cheese), and a fire-roasted rotisserie feature of the day.

Notch8 appears to have succeeded in its goal of offering both Vancouver visitors and residents a top-of-the-line gourmet dining choice, courtesy of its unique architecture and the talent of executive chef Cameron Ballendine. The West Coast native’s resumé includes stops in China, Egypt, France and the United Arab Emirates (at the Four Seasons Sharm el Sheikh. Other highlights include work with Moet et Chandon and Dom Perignon’s Chateau de Saran.

The glamour has been restored and notched up to a new, high level at Fairmont Hotel Vancouver, setting it apart from its nearby sisters – not to mention the city’s top restaurants.