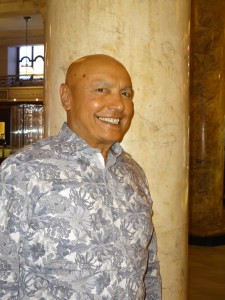 Colin Hunter was in Montreal in late June for a two-night performance at The House of Jazz, as part the Montreal International Jazz Festival. He was singing with a quartet anchored by his friend and Juno Award winning jazz pianist – Joe Sealy. In 2005 Colin recorded Come Fly With Me on a dare that the recording be played on Sunwing flights. He has just recorded his tenth cd, which is his fifth with jazzman Joe Sealy. While Colin and I love to talk about music and singing, the purpose of our conversation was to learn more about the continuing growth of Sunwing and its brands such as Signature Vacations and SellOffVacations.com.

Sunwing is the only travel company ranked in PROFIT 500 Magazine, and it is one of Canada’s fastest growing companies, having grown from $15 million ten years ago to $1.6 billion and now employing 2,000 people. The company offers sun destination holidays in Florida and The Caribbean from 33 Canadian cities. “We’ve become involved in resort management and subsequently resort ownership” stated Colin. “We now have approximately 8,000 rooms under our two main brands; Royalton and Memories, the latter catering more to a family market than Royalton.”

Sunwing has Royalton Resorts in Mexico, Grand Bahama, Jamaica, The Dominican Republic and Cuba; and has plans for expansion in St. Lucia. “Our Royalton in Santa Maria in Cuba is a luxury 120 room resort that Trip Advisor rates #1 for the entire Caribbean. Our Chef Sebastian came from Woodbine Race Track and he just loves working in this resort.”

The Royalton Trelawney in Jamaica has 325 rooms, and is joined by Royalton White Sands in Montego Bay; and another property at Negril. The White Sands property has supervised programs for children aged 2 – 12. All the restaurants have children’s menus.

All Royalton and Memories resorts have free WiFi (except in Cuba) and free texting for guests at the resorts. Multiple restaurants offer Italian, Spanish, sushi, fish & seafood, and a traditional steakhouse called Hunter. (What’s the point of owning a resort of you can’t have a little fun naming the restaurants!)

“In Punta Cana we have a larger Royalton with 1,000 rooms, plus a Memories. We have a dozen restaurants that cater to every taste. The Royalton Punta Cana has a luxury resort-within-a-resort called Le CHIC, a 323 room adults-only hotel.” Le CHIC has a spa, fully equipped training centre, and major sporting events are broadcast on large flat screen televisions. Guests have a choice of six restaurants, plus 24 hour room service.

The Royalton Riviera Cancun boasts 1,100 suites, 10 restaurants, a mini-club for children 4 – 12 and an adolescent lounge area for teenagers 13 – 17. Hideaway at Royalton is a boutique adults-hotel within a hotel at this property, that offers an exclusive A-la-Carte restaurant, a private pool and bar; plus all amenities offered by the larger resort.

For just $40 extra per flight segment ($80 return per person), Elite Plus guests have larger seats, 30 kgs of luggage (10 extra per person), pre-selection of seats and pre-boarding privileges.