Summer in Quebec would not be complete without a trip to the Eastern Townships to take in a performance at Theatre Lac Brome.  Only an hour from the Champlain Bridge Lac Brome is in the heart of wine country, charming villages and a wide array of artistic activity.

Since its conception in 1986 Theatre Lac Brome has produced an English language summer theatre season.  In the past three years the theatre’s mandate has expanded and it is now a unique cultural enterprise in the Eastern Townships, reflecting Quebec’s dynamic bilingual culture.

For the 2014 summer season the Theatre will present seven special events. From a celebration of the 50th Anniversary of the British Musical Invasion on Saturday June 14 with Vintage Wine, to the concluding Labour Day weekend with George Bowser & Ricky Blue, the Theatre invites the public to experience the intimate environment Knowlton’s small auditorium creates.

The theatre repertory season will present three diverse and entertaining plays. Opening the first week in July, in its original English language version is The 39 Steps, a comic and very theatrical adaptation by Patrick Barlow from the novel by John Buchan and the film by Alfred Hitchcock. It’s a classic whodunit for anyone who loves the magic of theatre.

The third production is a premiere presentation, Diva by Night an intimate encounter, in a cabaret performance, with Nathalie Choquette, performing on alternate nights in English and French. The season also includes a very special classical music concert with Gino Quilico, on Saturday August 14.

For more information, all the event particulars are outlined on the Theatre’s website at: www.theatrelacbrome.ca.  Mark the dates in your summer calendar and purchase tickets on line, (the Theatre reserves the best seats in the house for on-line ticket purchases) Discounted priced tickets are available until June 21.  Patrons are also encouraged to support local cultural activities by making a tax-deductible contribution through the Theatre website, or by calling the Theatre Box Office at 9 Mont Echo in Knowlton, 450-242-2270.  Spring has arrived, the curtain’s going up. www.theatrelacbrome.ca

(Editor’s Note: Author Louise Penny’s fictional village of Three Pines is based largely on Lac Brome (Knowlton) and there is now a self-guided tour and package. Please see page 25.)

This year the popular self guided Knowlton House & Garden Tour will be held on Wednesday July 9, showcasing five enchanting and inspiring properties.  The proceeds from the tour are donated to Theatre Lac Brome. The Tour is very popular, and routinely sells out. Every year several Knowlton residents open their lovely homes and gardens to the public in for the annual theatre fundraiser. 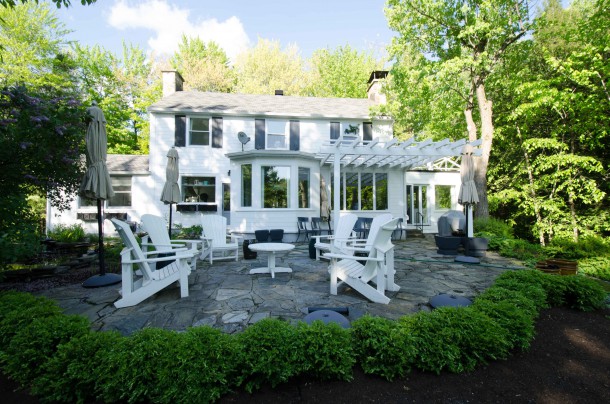 Tickets are $60 which includes a box lunch or a restaurant coupon.  The Theatre is also offering two-for-one tickets for a special performance of The 39 Steps, on July 9th at 6 pm for attendees of the House Tour and Lac Brome residents.  For tickets, please visit the website: www.theatrelacbrome.ca