We all oohed and aahed at the site of Petra’s Treasury, when Indiana Jones took us along on his third adventure. Mesmerized by the beautiful facade, I hoped that someday I would be lucky enough to live out my own Petra adventure. Earlier this year when an opportunity to visit Jordan arose, I jumped at the chance.

Gateway to a Hidden Treasure 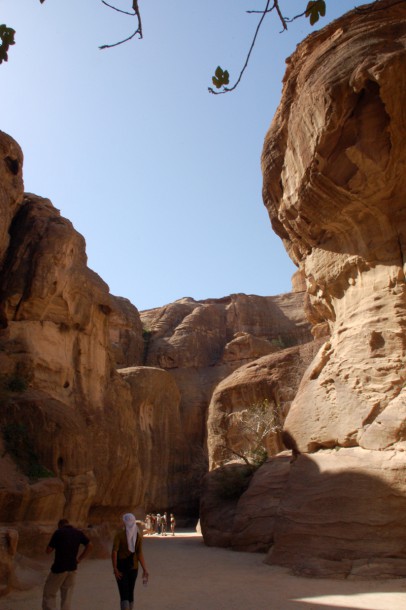 The Siq, a narrow, curving pathway that lies in the shadow of 80m high cliffs, has protected and hidden Petra throughout its history. Wind and water have smoothed the face of the walls along the 1.2km path. Following the meandering trail, at the base of the gorge are channels carved into each side. The channels, once lined with clay pipes, carried water from Ain Mousa (Spring of Moses) located several kilometres away.

This advanced system of pipelines, underground cisterns and dams ensured a constant supply of water to Petra’s citizens and allowed the Nabataean capital to flourish in this arid landscape. 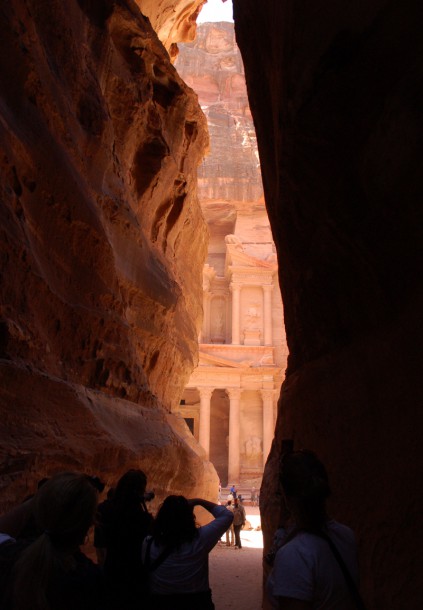 Exiting the Siq and catching the first glimpse of the Treasury.
Julie Kalan

From the relative darkness of the Siq, al-Khazna (the Treasury) suddenly appears glowing orange and pink in the direct morning sun. Stepping out of the Siq and into the open courtyard-like area, the size of the Treasury and the intricacy of the detail are awe-inspiring. Carved out of the sheer sandstone cliff nearly 2000 years ago, this iconic site illustrates the elegant blend of Nabataean, Assyrian, Egyptian, Hellenistic and Roman architectural styles found throughout Petra.

Most scholars believe that the Treasury was originally built as a royal tomb, funeral site or temple, but it received its name from the local myth that a Pharaoh had hid his vast treasure in the urn that sits atop the 40m high facade. The pot-marks that blemish the urn and surrounding area are from the countless gunshots that the Bedouins fired, in hopes of freeing the treasure from within the stone.

I could happily spend hours relishing this iconic sight, but with less than a day in Petra, I must quickly pass beyond this glorious threshold and enter into the monument-filled city. 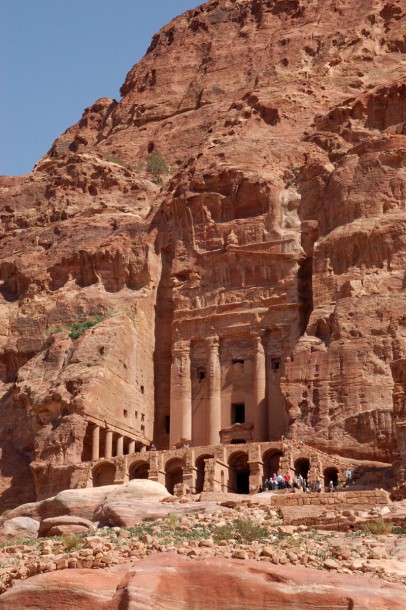 The Urn Tomb, one of the countless monuments
located in the Petra Archaeological Park.
Julie Kalan

A World of Wonder

Petra, one of the New Seven Wonders of the World, is centered in a valley basin amidst numerous mountains. Containing over 800 individual monuments, the Petra Archaeological Park encompasses 264km2. Petra is epic. It would take about four or five days to fully experience Petra, but a two day visit allows enough time to explore Petra`s most impressive highlights.

The pathway widens as it leads further into the city center. Along the way, we pass dozens of smaller, simpler facades that may be some of the earliest Petra carvings. Continuing on is a theatre that was carved out of the mountainside, the Royal Tombs, the Roman era colonnaded street and Temenos Gate, and the only large free standing stone building still erect in Petra, Qasr al-Bint.

The entire site is a testament to the thriving Nabataean society that controlled much of the ancient frankincense, myrrh, spice and silk trade routes.

The Height of Highlights

Before traveling to Jordan, numerous people had told me, that while in Petra, I must see El-Deir (the Monastery). Reached by nine hundred very well worn steps, the Monastery rests 220m above the valley floor. The path is taxing and I must admit that at times, I almost regretted my decision to start the climb. But the effort is well rewarded. Stopping frequently to catch my breath, I soon discover that with each stop the view grows ever more dramatic. Looking down at the valley floor, the towering facades become dwarfed by the surrounding landscape. The triumphant monuments, which only an hour earlier had impressed upon me their substantial size, now look like small decorations lining the mountainsides.

At the very end of the trail, after passing through one last narrow curve, the path descends slightly and emerges from the shadows. Turning to the right, I see what all the fuss is about. Bathed in the direct afternoon sun, the massive Monastery is overwhelming. Architecturally similar to the Treasury, though not as intricately carved, the Monastery is remarkably larger; the entrance alone is over 8m tall! 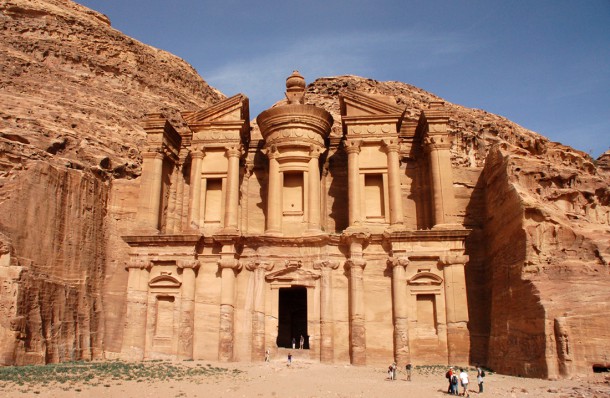 Across a sandy plateau facing the Monastery is a perfectly placed Bedouin tent shop, selling postcards, brass trinkets, scarves, and to my elation, cold drinks! This clever entrepreneur offers shaded seats and a small-cave like area where weary visitors can recline on padded benches, while appreciating the stunning Monastery.

While I contemplate the skill and dedication required to carve such a formidable monument, someone has climbed up the mountain and reached the top of the Monastery. In a “please do not try this at home” fashion, a local Bedouin is performing death defying stunts 45m above the ground. Navigating across the facade with showmanship, he clearly illustrates the immense scale of the structure.

To the accompaniment of gasps from the ever-growing crowd below, this daredevil leaps from one span to the next. Then scrambling to the top of the urn that crowns the monument, he triumphantly raises his hands and acknowledges his audience. 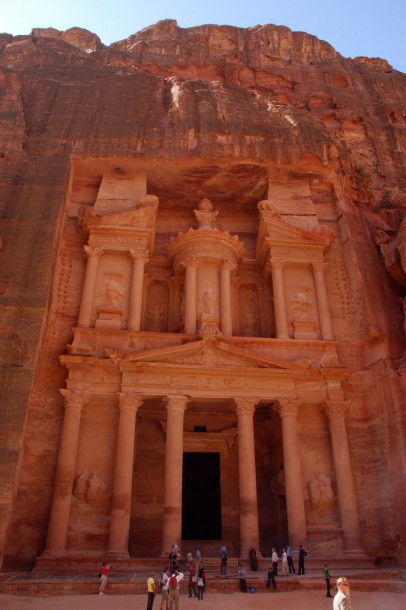 The walk through the Siq to the Treasury is majestic and magical at all times, but it is even more thrilling on the nights when 1800 candles light the way. Starting at 8:30pm, every Monday, Wednesday and Thursday night the candle-lit walk culminates in a performance of Bedouin music at the foot of the Treasury.

Visiting the Petra Kitchen is another great way to spend a memorable evening. The authentic Jordanian meal features soup, hot and cold mezza, salad and a main course. What makes the Petra Kitchen unique is not how the food is cooked but who cooks it – you! Alongside helpful locals, groups gather around tables devoted to each part of the meal preparation. At the Mana’eesh table, we quickly learned to roll out the dough into thin sheets and use an upside down wine glass to cut circles in it. While covering the circles with fresh goat cheese or thyme, our table quickly transforms from hesitant individuals to a smoothly running team. After enjoying the delicious fruits of our labour and toasting our success, each rookie chef receives the recipes to bring back home, along with their newfound skills. The Petra Kitchen is a place where laughter and learning are the prime ingredients to every meal.

Petra is located about 3 hours south of Jordan’s capital city, Amman. The city of Wadi Musa lies just outside the entrance to Petra and offers lodging ranging from budget to five star accommodations.

Petra entrance fees can be expensive, but are well worth the price. The one-day entrance fee is 50 JD (Jordanian Dinar), or just under $75CAN. When planning your itinerary keep two things in mind: (1) you will need a minimum of two days in Petra, and (2) the cost of a two or three-day ticket is only 55 JD and 60 JD respectively, making the per day cost extremely reasonable.

Petra By Night tickets can be purchased at the Site Office.

Contact the Petra Kitchen at [email protected] or www.petramoon.com to make reservations.

For more information on traveling to Jordan visit www.visitjordan.com or call 1-877-seejordan (733-5673).