Eric Dick and Celleste are partners in music, in business and in life. Celleste has enjoyed a successful career performing in Casino shows, as a backup singer, as a model and as the ‘face’ for the Uniprix in-house brand of makeup. She was the actress & singer selected for a Canada-wide television ad-campaign for Yoplait yogurt. Her rock-star good looks and musical celebrity won her a feature interview cover story in Summum, a French language men’s magazine along the lines of Maxim.

Celleste’s singing voice ranges from a sensual earthy tone to a raunchy, powerful sound that would make Janis Joplin step aside. In the rock ‘n’ roll business, it begins and ends with the music and talent. There’s no middle ground. Celleste connects with her audiences, drawing on years of experience singing in big production stage shows, show bands, and now in her own rock band. “For me – every show is Madison Square Garden… I give 110% whether there are ten, or ten thousand in the crowd.”  Eric is an accomplished multi-instrumentalist, producer, writer and singer; and a complement to Celleste’s charismatic onstage presence. He describes Celleste’s high-octane stage persona as a combination of Led Zeppelin’s Robert Plant and Madonna. 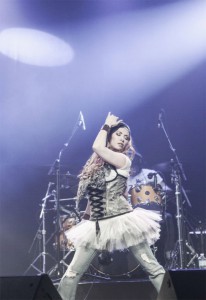 Celleste had the opportunity to take the stage before the legendary and spectacular Alice Cooper at the Harley Davidson Motorcycle event staged at Montreal’s Bell Centre last year. Her impressive performance received notice, garnering sponsorships with several music companies,  and she was invited to perform at the NAMM Show (National Association of Music Merchants), the world’s largest music trade show held annually in California.

The California showcase appearance led to an invitation to perform at Canadian Music Week in Toronto. Celleste jumps in; “We were really excited that Tom Jackson, who is one of the world’s top producers of live shows, used us to demonstrate how to stage a great live show.”

Following the advice of a trusted friend and entertainment lawyer in Los Angeles, the couple elected to keep their business independent. To this end, Celleste and Eric have created Mighty Music, an independent record label.  In a short time they have established a distribution network, a management agency, and a music production company, whose roster includes three artists and will continue to grow.

While not formally trained, their passion for creativity, and drive to succeed has the two handling literally all aspects of the company: filming and editing their videos, photography and graphic design, conception & building of websites, writing and producing the music, and let’s not forget taking care of the day-to-day business affairs. These skills have also led to outside work, and combined with Celleste’s singing and modelling, and Eric’s growing reputation as an in-demand record producer, the two are able to finance their development. “Everything we earn goes right back into Mighty Music. I don’t know where we find the time to do it all, but somehow we make it work”.

Her current cd Join the Infestation was listed as New & Noteworthy by iTunes in the US and in the Fabulous New Indies category of iTunes Canada. To generate music store sales of her debut album Ready To Fly, Eric contacted every Archambault location in the province and then he and Celleste drove to each store to visit with the manager and deliver CDs for sale by consignment. HMV was next on the list, and recognizing Celleste’s rising career, the chain also agreed to stock the CD, making Celleste the only artist on consignment in both major chains across Quebec. A glowing review of the album spurred sales and the stores ordered additional copies. All of this led to a Canadian distribution deal for Mighty Music: “We had to prove we were a serious label, and not just two hobbyists working from our kitchen table. The distribution deal secured our place in the market as a recognized record label.”

“We’re making our music for the international market.”
….. Eric and Celleste

Celleste’s You Tube videos enjoy high audience numbers in a business where the music video is a key marketing tool. Her debut album Ready To Fly was featured on Time-Warner’s IndTV, an on-demand television channel aired throughout California; and it’s been full speed ahead ever since. Her latest video in support of Superstar (By Myself) is a hit in itself. Will Mr. U. R. Donefore of Bogus Records trick the beautiful Celleste into signing with his label? It’s not hard to guess – but it’s a fun cinematic romp and a terrific showcase for the song.

All of their hard work is about to pay off. During our interview, Eric agreed with my observation that Celleste’s music and performance style is highly suited for the American market. In fact, he was way ahead of me; and I was just confirming something the entrepreneurial couple already believed. Within a week of our visit, they received a momentous call from Los Angeles.

Eric and Celleste are currently in talks with a Hollywood company whose success stories include artists such as Adele, LMFAO, and Muse. The partners are delighted. “They are a company that we’ve wanted to work with for several years now, and I was thrilled when I learned that they loved the new song/video, and that they wanted to work with us,” enthuses a very, very happy Eric Dick.

The future is looking terrific for Celleste and Eric. They just finished re-working six songs from Join The Infestation for an “unplugged” EP (extended play) cd to be released later this month. It may well be that Celleste and her band will soon be coming to an arena-near-you. It’s a terrific real-life story about making the most of a natural talent, of determination, passion, persistence… and a love story. Let’s wish them well.

For more information about Celleste, her music and videos,
please visit: www.celleste.com