For the first time in Montreal, Beethoven’s 1st Symphony will be performed on period instruments – the same as those available to the composer when he introduced his 1st Symphony to the world in 1800

Matthias Maute, conductor of Ensemble Caprice approaches each concert as a musical event – an important event for both the musicians and audience. “When I look at the programming – I ask if there is a way that we can create new situations that will stimulate our audience. Music is greater than the sum of individual notes. With the presence of an audience, one plus one is greater than two…” Continuing, he states; “The beauty of a concert happens just at that moment – and then it’s gone; remaining only in your memory.” But what a sweet and sustaining memory it can be. It’s a refreshing opinion from a musician and artist about the involvement and role of the audience.

Ensemble Caprice begins their new season at Bourgie Hall with a diverse and unique program, opening the evening with American composer Charles Ives’ The Unanswered Question for strings, flutes, oboe, clarinet and trumpet. “The strings represent destiny, while from a different part of the hall – the trumpet will ‘ask the question’ seven times. It’s a dramatic presentation where the four wind instruments represent humanity.” 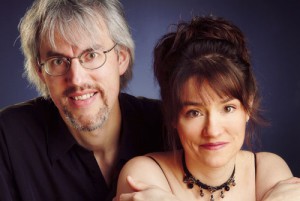 Furthermore, it’s a difficult piece of music to perform, demanding of the musicians. “Beethoven’s symphonies revolutionized playing as an orchestra. The previous convention was that the wind section was a colour to the strings. Beethoven brought the wind instruments forward – giving them their own role in the music. The changed the nature of the orchestra.” Matthias also noted how Beethoven used accents differently than his contemporaries, almost sliding into the beat. “Other composers often began a movement with a crescendo, but Beethoven would use it a little further into the piece, eliciting applause from the audience.” Matthias adds; “It took Beethoven many, many years to come to write his 1st Symphony. He carried a notebook so that he could capture his ideas.”
This is the beginning of an ambitious project for Matthias, his wife and co-artistic director Sophie Lariviere and their fellow musicians in Ensemble Caprice to perform all nine of Beethoven’s symphonies over the coming years. “This is a new era for Caprice, for my own life. This is the first time that it’s ever been done on period instruments.”

At the time of Hayden, Mozart and Beethoven, gypsy music was almost the popular music of the day, being performed in town squares and gathering places. Classical composers of the 18th century often worked some of the high-energy gypsy progressions into their own music. Beethoven himself wrote a short gypsy piece titled Rage over a lost penny. As a fitting preface to Beethoven’s 1st Symphony, Mattias has created a new arrangement (with an allowance for inflation) Rage over a lost dollar.

Matthias Maute and Ensemble Caprice will make their landmark introduction and performance of Beethoven’s 1st Symphony at the lovely and intimate Bourgie Hall (part of the Montreal Museum of Fine Arts campus) on Saturday, September 28 at 8pm. This will be the first of a four concert season, with an additional fifth special performance of Bach’s St. John’s Passion on Good Friday, April 28 at The Church of St. Andrew and St. Paul.