It was Tuesday, September 8, 1964. The day The Beatles came to Montreal.

11,500 people attended the evening concert, and 8,000 for the afternoon concert.

I knew about the Fab Four before they became popular over here. Even before Sid Bernstein had the ingenious idea of bringing them to America. I was living in England at the time and remember my older sister talking about going into London but not being able to get up the stairs of the Covent Garden tube (metro) station because they were blocked by hysterical, screaming teenagers. A musical group called The Beatles was in the city preparing for an evening show and sections of London’s transit system had shut down. No one was going anywhere.

By the time I arrived in Montreal, I was lost in the land of Beatlemania, worshiped the very ground the group walked on.

The Beatles came into our lives at a time of turmoil. President Kennedy had been assassinated the previous fall, the Vietnam War was raging, three Civil Rights workers had been murdered in Mississippi, and the Boston Strangler was in the news. The times needed a changin’. The Beatles brought us that change. 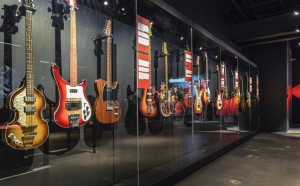 Just how much they impacted us is evident at a new exhibit at The Pointe-a-Callière Museum in Old Montreal. The museum has gathered together an astonishing number of artifacts; guitars owned by the Fab Four, personal items, a fine display of 45s on a wall, a child’s scrapbook filled with Beatle hopes and Beatle dreams, film excerpts, objects signed by The Beatles, all gathered together from personal collections. There is a video of ‘Buddy Gee’ (George Morris), one of the three DJs talking about his experience of introducing The Beatles on stage at The Forum. The piece de resistance is John Lennon’s Rolls Royce, loaned to the museum by the Royal BC Museum.

The exhibit also takes the visitor on a trip through the era – record players, transistor radios. Remember the princess telephones? There are bulky television sets and teenagers’ clothing presented alongside all the Beatles paraphernalia creating a real time warp.

Another glassed in room is set up with all the bric-a-brac, knick-knacks and odds and ends that went on sale at the height of Beatlemania; bobble heads, pencil cases, magazines, card collections, mugs imprinted with pictures of the ‘mop-tops’, and yes, even wigs! All proving that it was possible to eat, sleep, dress and think Beatles at all times.

You can even get on stage, stand in front of a microphone, against a backdrop of the group on the Ed Sullivan Show and become the 5th Beatle by singing along with them. As you move around the dimly lit rooms spread out over two floors, you become more and more entrenched in the era.

They were a wonderful breath of fresh air, those Beatles, in tumultuous times. They were magic in a time where fear dominated lives. Spirits were uplifted, floating in an atmosphere of adulation and common good. They gave so much. They were not only excellent composers and musicians; they brought comedy, witty British comedy into our lives. They impacted fashion and design. They changed the way that music was created and played.

The Pointe-a-Callière Museum takes you on a wonderful ‘Magical Mystery Tour’ through those times.

The Beatles Exhibit continues until March 30, 2014 – for the 50th anniversary of The Beatles visit to Montreal. For more information on The Beatles at Pointe-a-Callière www.pacmusee.qc.ca