Peter Trent is best known in his capacity as Mayor of Westmount and as the leader and champion of the anti-merger forces. After Bill 170 was passed in 2000, Trent continued to campaign for demerger, leading to legislation permitting municipal referendums for those cities who wished to reclaim their status. It was a lonely battle after the Bill 170 passed in the National Assembly, and Peter was disappointed by former allies who joined the mega-city political elite. “I was angry and I decided that by writing a book, I could transform that anger into something positive.”

The Merger Delusion by Peter Trent was published last fall in English and French. The sub-title; How Swallowing Its Suburbs Made an Even Bigger Mess of Montreal is a direct reference to the high cost of the merged and even de-merged cities; and how the system of municipal political parties has fueled corruption in too many communities across the island of Montreal. Trent states; “The de-merged cities and towns were not returned to their previous status – in conflict with the election promises of the Liberals who campaigned on a promise to allow de-mergers. Even PQ stalwart Bernard Landry is on record as saying that the forced mergers cost his party 20 seats in the National Assembly when they lost to the Liberals in the 2003 provincial election.”

Published by McGill-Queen’s University Press, The Merger Delusion is a scholarly work that Trent has meticulously researched and footnoted. He submitted the book for peer review and adopted some of the organizational suggestions. “They have made it a better book.” From his insider’s vantage point as Mayor of Westmount and a leader in the debate; Peter Trent brings clarity to the folly of the forced mergers, their initial and continuing cost, and how the bloated city council (the largest in North America) and party system have created an environment conducive to corruption.

The Merger Delusion has received solid reviews, and has caused several well-known Francophone journalists who were pro-merger to now admit that they were wrong, and that they owe their readers an apology for supporting the forced mergers. In fact, Peter notes that the studies done by the PQ and other independent researchers all came to the same conclusion – that mergers were not a good idea and would increase costs. “I hesitate to use the word ‘lie’, its provocative – but they certainly were not telling us the truth!” 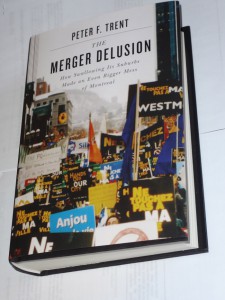 How did Peter Trent – a British-born, Ontario resident and university graduate come to be embroiled (and in some cases – the lightening rod) in Quebec municipal affairs and politics? It was a circuitous route, one that took the young chemist throughout the province of Quebec. Peter’s family emigrated from England when he was ten to a suburb of Toronto. He began working for a chemical company after graduating from university, and he travelled to Montreal during the summer of Expo 67. A promotion in 1968 required that he relocate to Montreal which he describes; “… for a twenty-two-year-old, was close to bachelor nirvana”. During the next four years Peter visited customers in paper mills, rubber factories, and paint manufacturers throughout the province.

At 25, Peter established a company with Raymond Charlebois in 1972, and during the next 18 years they built the company from a two man partnership to a 50,000 square foot facility on a 13 acre site on The West Island. They invented polymer composite materials used in construction and engineering, and took out patents in dozens of countries.

“It was hard to build that company, and I had many sleepless nights worrying about raising money and sometimes even meeting the payroll. I raised over $50 million to finance the growth of the company – which was difficult at the beginning when we didn’t have a profit to show.” It was a process that also developed his intellectual strength and personal courage.

At various times during our conversation, I was struck by Peter Trent’s level of courage. In discussing obstacles that had to be overcome in business and latterly in his political career, it became apparent (perhaps without his realization) that it took courage to build a company from nothing, to develop and sell inventions, and in his political career to make a stand based on morality rather than expediency. He described his decisions and subsequent actions without any expression of bravado. Simply stated – for him it was a case of doing the right thing.

And not without personal cost – especially during the campaign to stop the forced mergers. “The French media and PQ did their best to turn the merger debate into a language debate. But it was really about home owners not wanting to see their taxes go up. On the south shore, and in other cities throughout the province, mainly Francophone populations of homeowners were also against the mergers. Language was certainly not an issue is those instances. But I was vilified.”

Continuing, he states; “When you’re attacked – you have to develop a thicker skin. However the problem with this is that you also become less sensitive – less empathetic. This is counter-productive – to be less sensitive to the very people that you’re supposed to serve.”

“Isn’t it ironic that the Parti Quebecois, whose sole purpose is to take Quebec out of Canada after a referendum is the same party that forced mergers by legislation without allowing referendums? Further, they claimed that the concept of mergers had been discussed for decades – even though it was not mentioned as part of their election campaign.”

Peter has a refreshing view of the role of municipal governments. “Our job as stewards is to provide services for our citizens; to make sure that the roads and sidewalks are in good shape, that the water is clean, snow removed, parks and public buildings maintained. A municipality takes in taxes and should give that money back to the citizens in the form of services.” Peter uses Montreal’s one-hundred-year-old aqueduct as an example. “Instead of fixing the water delivery system – we spent billions on the Olympics for a two-week event.”

“With sixty-four members, Montreal has the largest city council in North America. The maximum we should have is 18 or 19. The provincial government has created a parliamentary system in City Hall. The council is far too large to be effective, and so we have an Executive Committee that is the equivalent of a Cabinet. We have a Speaker and an Opposition in Montreal. That’s no way to run a city.”

“Next – we don’t need political parties in Municipal politics. It causes politicians to be loyal to their party rather than answer to the citizenry. And of course there is to need to finance a party, and we’re seeing the results of that with the testimonies at the Charbonneau Commission.”

“Municipal governments are fundamental to our democracy. It’s the one level of government that citizens can be close to – where you can attend the local council meeting and address the council. At any given council meeting we have 15 – 50 people. That would be equivalent to 4,000 people coming to a City of Montreal council meeting! The only way to address Montreal City Hall is through a lobbyist.”

“A person’s feeling of attachment to their community promotes volunteerism. During the ice storm, we had people showing up a City Hall asking how they could help. They delivered letters from City Hall to keep people informed and then helped to clean up fallen branches from the parks. People will only do that if they’re engaged, and that only works in smaller cities.”

On former mayor Tremblay’s eventual successor: “There are very few potential candidates, and the ‘star’ candidates don’t have any municipal experience. Tremblay was a lone wolf within his party, and he wasn’t grooming anyone to be an eventual successor.”

“In order to see our way out of this mess, I believe that we need to know and understand the history of how we got into this situation. Then we can begin to make the adjustments and changes necessary to work our way out. Imagine what we could do with the hundreds of $millions that has been paid out as corruption premiums, estimated at between 25 and 35 percent of the annual $400,000,000 public works budget.”

The Merger Delusion: How Swallowing Its Suburbs Made an Even Bigger Mess of Montreal is a well-researched and entertaining modern history of Montreal’s political elites by Peter Trent – who has occupied a front row seat and whose first-hand account of the people and events are a fascinating look inside Montreal’s political machinery. Perhaps unintentionally, this book is also a chronicle of one man’s sense of civic duty, integrity and courage as he campaigns for what he believes is right.