When most Canadians consider vacationing in Germany, chances are the country’s northernmost region isn’t the first place that pops up on their radar screens. This, at least, is the way it worked for me. Previous trips had taken me to Munich, Berlin, Bavaria, the Black Forest and some of the wonderful fairytale castles built by Germany’s famous Mad King Ludwig II. Consequently, the only part of the country left on my “unexplored list” was the northland. Germans who live there—or the thousands that holiday there every year—would likely insist I had saved the best for last. However, not wanting to play favourites I will simply say the region has plenty of surprises and many engaging places to explore including at least three UNESCO World Heritage Sites.

Situated on the shore of the North Sea at the mouth of the Elbe River, this port town boasts an historic cruise terminal where, over time, hundreds of thousands of people seeking a better life abroad gathered for emigration to Montreal, Halifax and the United States. Among them were eastern Europeans, Germans, Jewish refugees and, following the Second World War, more than 3,000 “war brides” and 2,000 Canadian soldiers.

Overall, Cuxhaven is a popular summer holiday venue with its miles of long sandy beaches, vacation hotels and remarkable restaurants. However, clearly the most interesting attraction is the Wadden Sea National Park named a UNESCO World Heritage Site in 2009. Located in the southeast portion of the North Sea, the Wadden Sea’s tidal mud flats look like nothing else on earth and people from around the globe come to see them. In bare feet, visitors walk the flats that extend for miles and contain an ecosystem second only to a tropical rainforest. Just beneath the mud surface there is a biomass of snails, tiny crabs, worms, mussels and shrimp. At low tide it’s possible to walk or take a horse-drawn wagon ride to a nearby island. If the idea of walking over a great expanse of muddy sea-bottom has little appeal, guides at the on-site visitors’ center insist it’s good for your feet. Visitors can walk the flats on their own but the best way to get the most out of the experience is by taking one of the many guided tours.

Also named a UNESCO World Heritage Site, Lubeck is northern Germany’s only city with an extensive medieval Old Town boasting more than 1,000 historic buildings and a pretty skyline dotted with Gothic red brick spires. Located on the Trave River, close to the shores of the Baltic Sea, the city has numerous museums, galleries and theatres plus various guided bus tours and river cruises. However, exploring the Old Town section on foot, where narrow cobblestone streets and alleyways have surprises around every corner, is the best way to soak up the ambience of this engaging city that dates back to a Neolithic settlement. During the 14th and 15th centuries, it was the capital of the Hanseatic League, a medieval trade organization of wealthy shipping merchants.

Visitors to Lubeck should include two things on their must-do list: sampling its marzipan and tipping a class of wine. The city is famous for its almond-based marzipan, a popular confection Lubeck claims to have originated in the early 1800s – perhaps earlier. It’s found everywhere, in city shops, tearooms and restaurants. While frothy mugs of beer may be the libation people most associate with Germany, however, this particular town’s wine trade took root during the 13th century so there has been plenty of time to get it right. Considered a specialty of the city is Rotspon, a red Bordeaux derived from French grapes but aged in Lubeck in oak wood barrels.

Another good feature of Lubeck is its proximity to the neighbouring community of Travemunde where its Baltic Sea waterfront is a popular vacation resort area. Prior to my trip to the country’s northland, I was unaware that Germany even had seashore holiday spots.

Lying about 28 miles east of Lubeck, this port town on the Baltic Sea dates back to 1229 and during the 14th and 15th centuries, like Lubeck, it was a prosperous Hanseatic League center. Named a UNESCO World Heritage Site in 2002, Wismar boasts one of the best preserved medieval Old Town centres in northern Germany. Likewise, it ranks among other Hanseatic cities famous for characteristic red-brick Gothic architecture.

A perfect place to commence an exploration of this enchanting city is its cobblestone Marktplatz (market square), one of the biggest and most impressive in Germany’s northland. At the north end of the square is Rathaus (town hall) where its underground vault features a permanent exhibition of art and antiquities depicting the city’s past. Its abundance of architectural gems from various periods, including carefully restored merchant houses, help put this city on a northern Germany must-visit list.

While ancient architecture and a fascinating historical past are at the core of its character, Wismar’s cultural diversity includes museums, concert venuess, festivals, theatres, cafes, bars, a vast selection of shops and an array of restaurants including one that opened in 1878 in the town’s oldest merchant house. In fact, the city boasts a little bit of everything including a zoo that houses a variety of animals including some that were once indigenous to the region: lynx, wolves and wild cats.
For more information about Germany travel see www.germany.travel. 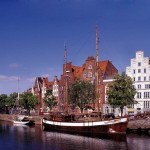 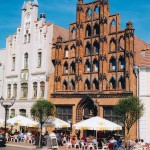 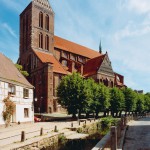