Toronto is made up of a patchwork of distinctive neighbourhoods.

The entertainment and financial districts reside in the core of the city, to the east is Old Town Toronto and a little to the west is the art and design district of West Queen West. This 2 km (1.2 m) stretch of art galleries, fashion boutiques and independent speciality shops is transitioning from a low rent area to a hip and artsy community.

The official delineation of West Queen West’s eastern edge begins at the corner of Bathurst and Queen Street West. Just a couple of doors east of this intersection is Shanghai Cowgirl, a casual diner with a memorable and eclectic menu. 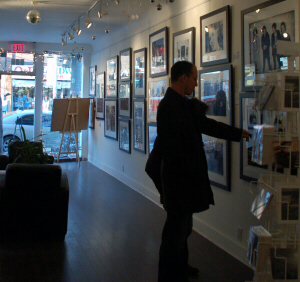 My choice for lunch is a spicy re-invention of the grilled cheese sandwich, with havarti cheese, jalapeño and avocado on a whole-wheat bun. This tasty option is just one of the five versions of grilled cheese and at least four different styles of perogi served here. Their most talked about dish is griddled chicken with wasabi mayonnaise, served on a bun and affectionately called Trailer Trash Sushi.

Guiding me along the vibrant, avant-garde West Queen West is art and fashion journalist Betty Ann Jordan. Betty knows every inch of the area and all the owners and artists at each gallery, boutique and restaurant. The first stop is the Analogue Gallery. Beyond the old storefront entrance lies a feast of rock n’ roll photography. Intimate, funny, dramatic and rarely seen before shots of music’s greatest legends line the walls. Mainly in black and white, these limited edition prints feature the famous faces of Elvis, Tina Turner, Diana Ross, Miles Davis, John Coltrane, the Rolling Stones, The Beatles, Johnny Cash, Bruce Springsteen, Frank Sinatra and over two hundred others. Lucia Graca, owner of the gallery and a rock and roll photographer herself, is a pleasure to talk to and her knowledge of the photos and photographers adds an extra depth to each piece of photographic art.

A little bit further west is GreenShag, a quaint and uncluttered custom-tailoring menswear boutique, with a gentle nod towards the old-fashioned ideal of elegant and fashionable dressing.

Alongside a vintage manual sewing machine and an old, heavy, black rotary phone is their surprisingly vast selection of funky cufflinks. The GreenShag, Klaxon Howl, Ben Sherman and about a dozen other such shops, all within a ten block stretch, make this area the largest concentration of custom-tailoring menswear shops outside of London`s Saville Row.

KolKid is a great spot for finding creative toys for kids and the Magic Pony is a unique store that sells rare designer toys from Asia and books on pop culture. Up a short flight of stairs in the back of the shop is the Narwhal Art Projects contemporary art gallery.

On the East Side of Queen Street West

In keeping with the day’s theme of Queen Street West, I am dining at the Ultra Supper Club tonight. Located closer to the downtown core, at the corner of Soho, this stylish restaurant lies beyond a pair of large red doors and an outdoor pathway lit by tiny white lights. A fully stocked bar compliments the cuisine and I highly recommend the roasted sweet corn soup and the house made sorbet – a marvellous trio of flavours!

Like the Friendly Giant used to say, “Look up, look way up,” and there you will find a whole new world of dizzying heights, breathtaking views and a restaurant that will have you spinning; Toronto’s star attraction: the CN Tower. Gazing out the window during the one-minute elevator ride is the best way to appreciate the vertical distance. Look down and you may find yourself standing on one of the recently added glass windows in the elevator floor. A large glass floor is on the lowest observation deck, 112 stories up. They say that the glass floor is strong enough to hold the weight of 14 large hippos, so you can feel at ease trying it – even if you have packed on a few extra winter pounds. 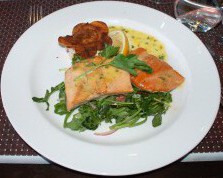 A delicious dish of pan roasted Quebec Rainbow trout with sweet crab, at 360 The Restaurant at the CN Tower
Credit: Julie Kalan

The outdoor observation deck is also located on this floor, 342m (1122ft) above street level. The Look Out level is one floor above and if that is not high enough for you, another elevator can bring you up an extra 33 stories, to the Sky Pod level. Toronto has grown and changed so much over the last few years that the views constantly offer new points of interest.

Brand new for 2011 is the Guinness World Record holding EdgeWalk – a nerve testing experience that involves walking around the outside of the tower, on a 1.5m (5ft) wide ledge 356m (1168ft) above the streets of Toronto with only a wire keeping gravity at bay. With a mix of disappointment and great relief, I discover that EdgeWalk only operates from May to October, so on this visit I will be staying safely inside the building.

For the most relaxing, enjoyable and delectable way of taking in the view, dinning at 360 The Restaurant is the way to go. This is not the place for a quick snack, dining here is an experience. If possible, get a seat by the window and bask in the full 360° views as the restaurant makes its 72-minute rotation.

Chef extraordinaire Peter George prides himself on using locally grown produce and market-fresh regional ingredients, all thoughtfully presented. And for the cherry on top, the world’s highest wine cellar is at an elevation of 351m (1151ft). Stocked with over 550 different wines from around the globe, the cellar stores 9000 bottles: red, white, rosé, sparkling and more. My meal consists of a grilled calamari appetizer, pan-roasted Quebec rainbow trout entrée and a delicious dark chocolate tower with raspberry and vanilla crème for dessert – all while enjoying the ever-changing skyline. 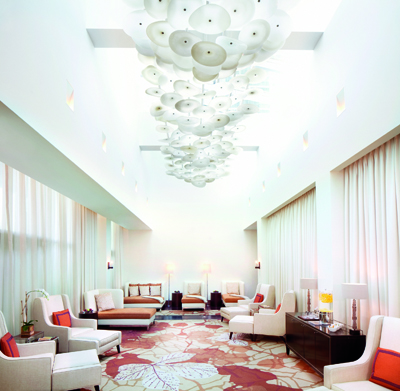 Co-ed Sun Room / The Spa at the
Ritz-Carlton, Toronto
Credit: by Christopher Cypert

Coming back down to earth can be a letdown, but the best way to keep that “on cloud nine” feeling is with a Ritz-Carlton Spa treatment. The spa offers separate male and female relaxation lounges for pre- or post-treatment use, and a co-ed sunroom with floor to ceiling windows. There is a salt-water pool, sauna and aroma infused steam rooms.

hrough to at least April, the newly opened Ritz-Carlton Toronto is offering a special Retail Therapy package that includes a pre-visit consultation with the aid of a personal shopper (need to find something special for your better half?), a deluxe room, and access to the snack filled Club Lounge, plus a leg message and paraffin treatment.

I am lucky enough to “test” the spa portion of this package and can personally testify to the benefits of this royal treatment. A foot soak, a lower leg message and the paraffin treatment’s blissful booties warming my tired toes and soles – magnificent!

Castle on the Hill 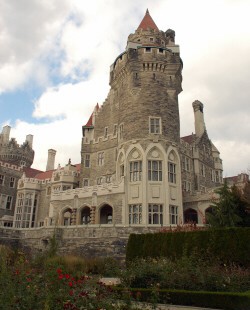 After being treated like a princess or prince, why not check out Toronto’s castle, Casa Loma. Located in midtown, on the edge of a hill, Casa Loma boasts 98 rooms, secret passages, towers and gardens. The residence was built in 1911 by Canadian financier Sir Henry Pellatt, at a cost $3.5 million. Sir Henry’s fortune grew quickly during the first decade of the 20th century. He founded the Toronto Electric Light Company, invested in the Canadian Pacific Railroad and was chairman of no fewer than 21 companies. However, when World War I broke out his luck changed. Less than ten years after moving into Casa Loma Sir Henry and Lady Pellat were forced to abandon their dream home. The castle, though not comparable to the medieval castles of Europe, is still an interesting sight.

There are 18m (60ft) ceilings in the Great Hall, Italian marble floors in the conservatory, a wine cellar reached by a secret door in Sir Henry’s study, a 244m (800ft) underground tunnel connecting the stables to the castle, and even Spanish tiled floors in the stable!

The original plans had also called for a bowling alley and swimming pool in the basement, but due to a shortage of funds, these luxuries were never completed. 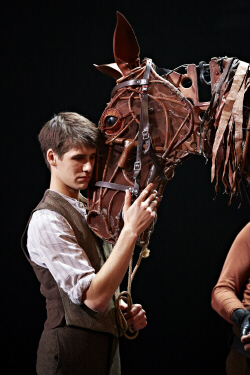 Since 1986, Mirvish Productions has been bringing thunderous applause to the entertainment district’s theatres. Their long list of acclaimed live theatre productions continues with the Tony Award winning War Horse, playing at the Princess of Wales Theatre from February 10th through to the end of June. Joey, the horse, is brought to life by an amazing full-size puppet that is so expressive audiences in London and New York have often been reduced to tears by the flick of his ears and swoosh of his tail. War Horse is a touching story of friendship and courage during the dark days of World War I that was so compelling to Steven Spielberg that he re-created it in the film of the same name.

The place to go for a late after-theatre dinner is the Thompson Diner on Wellington Street West. This modern version of a diner is open 24 hours a day, serving Mac and cheese, quesadillas, burgers, breakfasts and cocktails. The diner is on the ground floor of the boutique Thompson Hotel. One of my favourite spots to view the city skyline is from the Thompson’s Rooftop Lounge. From here, the CN Tower’s light show (amid the lights from the office buildings and streets) is stunning. However, there is one catch – gaining entrance into the Rooftop Lounge requires some extra effort. The place is very popular, so dress to the nines and expect to wait in line behind a velvet rope outside the hotel.

Artist, engineer, inventor – any of these words can be used to describe Leonardo da Vinci and at the Ontario Science Centre, until March 18th, we can take a closer look at his genius. Leonardo da Vinci’s Workshop exhibit displays a party platter of his creations, from drawings to scale models of his inventions and touch screens that let visitors peruse the pages of his notebooks. Several sketches illustrate the complexities of perspective, studying how converging lines create the sense of depth used in renaissance art. It would be easy to simply glance down at these glass-topped tables and then move quickly past them, but these pages reveal the methodology behind the masterpieces. There are even one or two beautiful pages devoted to the intricate play of light and shadow on drapery.

The most revealing and insightful element of the exhibit, for me, is an interactive presentation on da Vinci’s Last Supper. By clicking on the screen, you can select different aspects of the work to explore, such as how the colours would have originally appeared and why a section of the painting was removed in the 17th century. Apparently, in 1652 the monks at Santa Maria delle Grazie, in Milan, decided that they needed another door in the refectory. Shockingly, they opted to put the door in the middle of the mural-lined wall, cutting off the section with Jesus’ feet.

Always Something New To See

Over the years, like many of us, I have visited Toronto several times and much to my amazement, I have always found new places to explore. Whether touring the city’s many neighbourhoods, exploring the museums or watching the curtain rise on a great play, Toronto continually offers its visitors plenty of reasons to keep coming back.