Norwegian Cruise Lines has established a reputation for family-friendly cruise holidays. We discovered first-hand that the cruise line is geared for families, from the Freestyle open seating to the accommodations and onboard activities for kids of all ages. Our group of five included two grandparents, two parents and our grandson.

Beginning with our ship, the Norwegian Getaway, our itinerary was ideal for a family holiday centered around an eight-year-old. The ports of call all included beach options, and our group spent most of the two sea days in and around the onboard water park. 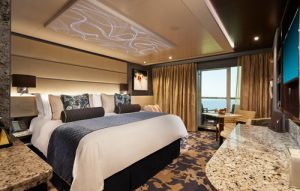 The Norwegian Getaway is the second of five ships built in the company’s Breakaway class. By today’s standards The Getaway is a mid-sized ship that can accommodate 3,969 passengers and 1,640 crew members to ensure that everyone is looked after and holiday expectations are met. Not only did our service exceed expectations, the service we received from the wait staff to the children’s pool monitors was always delivered with kindness. It’s a reflection on the company’s selection process and hiring policies.

The Breakaway class of ships introduced The Haven, a forward section of the ship that provides what amounts to a cruise within a cruise. The Haven is accessed through a private elevator controlled by your key card. While all the staterooms are comfortable and well-appointed, The Haven accommodations are superior. The haven also has its own dining room, its own pool and sundecks. This part of the ship routinely sells out first. For some intergenerational cruises, Grandma and Grandpa may opt for The Haven and the rest of the family in nearby staterooms. We’ve also noted that The Haven is also popular with families.

In our case, we opted for adjoining balcony staterooms. The companion door was open most of the day, and closed at bedtime. It worked out just fine, with our grandson floating back and forth.  It also gave us those relaxed occasions for those precious and unhurried conversations with our son and his family who now live in France – thousands of miles and an ocean away from us. 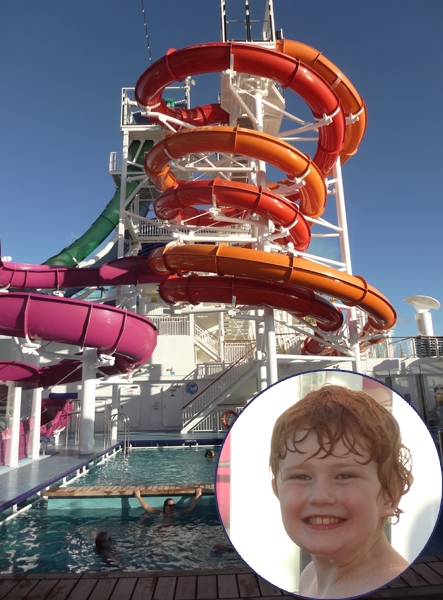 Norwegian Cruise Lines has been an industry leader in several facets of onboard offerings; including entertainment, freestyle dining and children’s programs. Guppies for children under four and accompanied by parents; and Splash Academy for children aged five to twelve, who are divided into subgroups according to age. When we first started cruising with Norwegian, our kids participated in the onboard kids’ programs. Now, a generation later, our eight-year-old grandson was eligible for Splash Academy. The Splash Academy is in a secure area of the ship with the same door for entry and exit. The interior space spans two decks and the rooms are fully equipped with art supplies, video screens and all kinds of activities. All groups are supervised by trained animators.

The Getaway has a terrific onboard water park that includes two levels of water slides, a smaller one for children and a larger version for teens and adults. The slide monitors control the height restrictions for both slides – which our son and grandson give top marks. Children also have their own pool with plenty of nearby lounges for mom and dad. There is lifeguard/supervisor on duty during the pool’s opening hours. The Getaway also has an Arcade with all kinds of skill testing games from foosball to video games. It’s a paradise at sea for kids and teens. To maintain some kind of control there is a nominal charge, but you can enjoy a friendly competition on several games for about $1.50 each. I can report that the arcade as a huge success with our grandson… and many of the other kids sailing that week.

At the aft end of the ship, the H20, there is an Adults Only sundeck that offers bar service, plenty of space and hot tubs. How about movie night under the stars – you’ve got it on the huge outdoor screen at H20.

Norwegian did away with first and second seating and pre-assigned tables years ago, and Freestyle Dining continues to be immensely popular. You can still make reservations for your group, and we found that worthwhile. When being escorted to our table (lunch or dinner) the Maitre D’ brought along a Children’s Menu and crayons. One side had the Children’s Menu – and figures to colour on the reverse. It’s a small thing – but a thoughtful gesture for kids and parents alike. 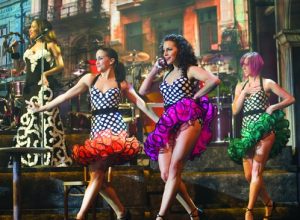 Getting back to the entertainment; the shows on The Getaway were outstanding. We saw the Broadway hit show Million Dollar Quartet in the main theatre. It’s a true life re-enactment of a December 4, 1956 recording session at Sun Records that features a gathering of Carl Perkins, Johnny Cash, Jerry Lee Lewis and Elvis Presley; along with the record company owner Sam Phillips. It was a tremendous performance that had the audience on its feet, calling for encores long after the show’s scheduled conclusion. We also attended a fascinating dance production called Burn The Floor, loosely based on the opposing gangs in West Side Story. It was a tour-de-force that combined multiple percussionists and a talented dance troupe. 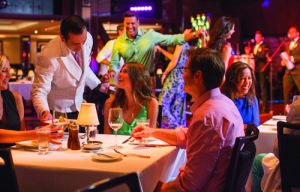 Simply put – you don’t have enough time to take in all the shows in the different venues throughout the ship. Comedy continues to be a guest favourite in Headliners, which is also the home of Howl at the Moon duelling pianos. Guests send requests up to the two pianists who take turns playing and singing in a friendly competition. Fans of Classic Rock from the 70s and 80s (this is not your grandpa’s cruise line) will enjoy the crackerjack band in Syd Norman’s Pourhouse that also plays entire albums from artists such as Fleetwood Mac. Fans of dinner theatre can enjoy a three course dinner in the Illusionarium followed by a music and comedy show from the award-winning group called JunNK who have been featured on BBC, Fox and other international networks. 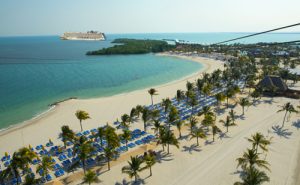 For dining options, the Getaway has seven restaurants that are complimentary (included in your cruise fare), and an additional eight alternative restaurants for a moderate additional charge. Our group enjoyed two dinners in Tropicana, the elegant main dining room that often has live music and a large dance floor. We also enjoyed the same menus in the more intimate Savour and Taste dining rooms on three occasions. For alternative dining, consider Le Bistro for classic French Cuisine, Cagney’s Steak House (just what you’d imagine with wood panelling, crisp white linens and delicious steaks, chops, and seafood). Weather permitting; you can enjoy Italian at La Cucina out on deck or inside.

Our itinerary took us to the NCL Private Island in the Bahamas. The beaches are idyllic; there are enough lounge chairs for everyone, plus luxurious bungalow-style mini-cottages that overlook the beach. We had an outstanding day of swimming, snorkelling and an immense BBQ for lunch. We’ve enjoyed the ‘private island’ for decades, with our children and now grandson. That beach day brought back fond memories for our son who now could share that ‘day-to-remember’ with his son. Pretty special for us too! 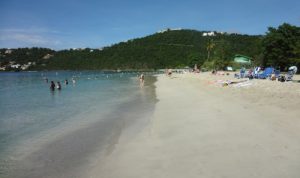 Our day in St. Thomas included a visit to the top-rated Megan’s Bay Beach

After a day sea, we continued on to St. Thomas, one of our favourite Caribbean Islands and home to Megan’s Bay, one of the world’s most beautiful beaches. We took a tour that took us to the top of the island’s mountain, where we had an excellent view of Megan’s Bay. One again, this was a nostalgic moment for our son had informed his wife Clotilde that “We’re going to Megan’s Bay when we’re in St Thomas – that’s a given!” As it turned out – there was enough time for a little shopping before returning to the ship. With warm water, and a lovely sandy beach, it’s pretty easy to keep an eight-year-old amused.

Next up was San Juan, Puerto Rico. I had some business on the ship that day and our son and his family did a walking tour of Old San Juan that they thoroughly enjoyed. Our next port of call was Amber Cove in the Dominican Republic. The facility has shopping and a huge water park. With a terrific water park on the ship – we elected to take a supervised taxi to Sosua Beach. It gave a chance to see parts of the island nation, and another lovely beach day. 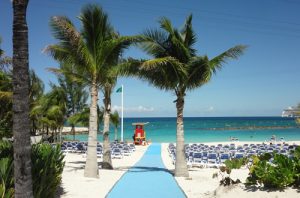 The Norwegian Getaway gave us an ideal family vacation. There is so much to do that we were able to go our separate ways at times. Our grandson enjoyed some quality time with us, and in turn we had a lovely visit with our son and daughter-in-law.

The Norwegian Getaway sails from Port Canaveral, and is serviced by the Orlando airport. There’s an opportunity to extend your holiday and take in Disney World and the other major theme parks in the area. For more information about Norwegian Cruise Line and The Getaway, please visit www.ncl.com or contact your travel agency. Bon Voyage!

Editor’s Notes: In January and February, the Norwegian Getaway is offering 10 and 12 day cruises from New York to Bermuda, Nassau, Great Stirrup Cay (described in the article). The company’s newest ship, Norwegian Prima will be sailing the Orlando round trip described in this article from January through March. Norwegian Getaway will be sailing in various European itineraries from June through October. Please contact your travel agent or visit ncl.com to explore the cruise options originating from Port Canaveral/Orlando. Bon Voyage