A rare opportunity to hear the celebrated British cellist Steven Isserlis, acclaimed for his profound musicality and masterful technique. He will perform alongside remarkable Canadian pianist Connie Shih, who will be making her first appearance in Montreal.

As a concerto soloist he appears regularly with the world’s leading orchestras and conductors, including the Berlin Philharmonic, National Symphony Orchestra Washington, London Philharmonic and Zurich Tonhalle orchestras. He gives recitals every season in major musical centres, and plays with many of the world’s foremost chamber orchestras, including the Australian, Mahler, Norwegian, Scottish, Zurich and St Paul Chamber Orchestras, as well as period-instrument ensembles such as the Orchestra of the Age of Enlightenment and Philharmonia Baroque Orchestra.

As an educator Steven Isserlis gives frequent masterclasses all around the world, and since 1997 he has been Artistic Director of the International Musicians’ Seminar at Prussia Cove in Cornwall, where his fellow-professors include Sir Andras Schiff, Thomas Adès and Ferenc Rados.

As a writer and broadcaster, he contributes regularly to publications including Gramophone, The Daily Telegraph and The Guardian, has guest edited The Strad magazine, and makes regular appearances on BBC Radio including on the Today programme, Soul Music, as guest presenter of two editions of Saturday Classics, and as writer and presenter of a documentary about the life of Robert Schumann. Most recently, he presented a documentary on BBC Radio 4 ‘Finding Harpo’s Voice’, about his hero Harpo Marx.

He gives most of his concerts on the Marquis de Corberon (Nelsova) Stradivarius of 1726, kindly loaned to him by the Royal Academy of Music. 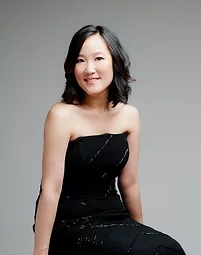 The Canadian pianist, Connie Shih, is repeatedly considered to be one of Canada’s most outstanding artists. In 1993 she was awarded the Sylva Gelber Award for most outstanding classical artist under age 30. At the age of nine, she made her orchestral debut with Mendelssohn’s first Piano Concerto with the Seattle Symphony Orchestra. At the age of 12, she was the youngest ever protégé of Gyorgy Sebok, and then continued her studies at the Curtis Institute in Philadelphia with Claude Frank, himself a protégé of Arthur Schnabel. Later studies were undertaken with Fou Tsong in Europe.

As soloist, she has appeared extensively with orchestras throughout Canada, the U.S.A. and Europe. In a solo recital setting, she has made countless appearances in Canada, the U.S., Iceland, England, Spain, Italy, Germany, Japan and China. Connie has given chamber music performances with many world-renowned musicians. To critical acclaim, she appears regularly in recital with cellist Steven Isserlis. Including chamber music appearances at the Wigmore and Carnegie Halls, she performs at the prestigious Bath Music Festival, Aldeburgh, Cheltenham, Weill Hall (N.Y.), and at the Kronberg Festival. Her collaborations have included Maxim Vengerov, Tabea Zimmerman, and Isabelle Faust.

In 2019/20 Connie toured North America and Europe with Steven Isserlis, and Asia with Joshua Bell. In addition she appears at concert venues across Germany with the cellist Manuel Fischer-Dieskau with whom she recorded the first-ever CD of the Sonatas for piano and cello by Carl Reinecke and the complete Beethoven sonatas. Her CD with Steven Isserlis on the BIS label was recently released.