This fall is the 50th Anniversary of the ’72 Canada-Russia Hockey Summit Series. People of a certain age remember where they were when Paul Henderson scored the wining goal, thus saving us from defeat at the hands of the relentless Russian hockey. In 1972, Terry Mosher was a young editorial cartoonist, newly signed on with the Montreal Gazette, and he and jumped at the invitation to travel to Russia and chronicle the series in sketches and cartoons.

Terry’s work has already been commemorated with a Special Edition Canada Post stamp featuring the fleet-footed Canadian beaver slipping away from a Russian Bear. We all love Aislin’s cartoons, and his 50-plus years at The Gazette and his always popular books are a testament to our fondness and loyalty to Terry. He’s ‘our guy’ and we savour his quick wit with perhaps a touch of envy that we wished we could be as observant and quick-witted. Not to mention his ability to draw!

The sub-title of this book reads, “… cartoons and Anecdotes”. Beginning with a touching forward by Yvan Cournoyer, I found the anecdotes to be interesting and entertaining. You know what? It turns out that Terry is a fine writer too! This book has more text than we’re used to in ‘reading’ Terry’s books of editorial cartoons, where a sentence or two provide some context to the cartoon on the page. In this book, Terry takes us down to ice-level and behind the scenes.

In a review by Historica’s CEO, Anthony Wilson-Smith, he writes:  “…it details the on-ice and background drama during what remains the country’s most storied sporting event, based largely on the odds-defying goal by Paul Henderson that clinched the series for Canada with 34 seconds to go.”

Wilson Smith continues; “Montreal to Moscow also reminds readers of how long – and thoroughly – Terry, as Aislin, has been an integral part of Canadian life. Terry has chronicled our collective experience for so long and so well, it’s impossible to imagine a world without him engaging, enraging, amusing and arousing his readers. Happily, he’s far from done. With this book, he reminds us that even as the world lurches from one crisis to the next, we’ve been down bumpy roads before, and history is full of surprises.”

Terry and his wife Mary Hughson have become accomplished at self-publishing Terry’s books and setting up a network of independent books stores in Greater Montreal. 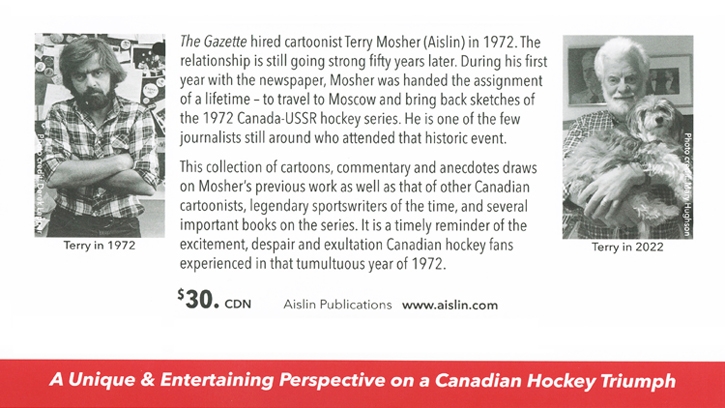