A phoenix has risen in Prince Edward County (PEC), Ontario and their name is The Royal Hotel. Here meets a wonderful triangulation of farm to table, vineyard to glass and design to property. Top it all off with a staff that is simply bubbling with enthusiasm and gratefulness, the sleepy town of Picton is not only on the cusp of a transformational moment but the entire region is about to be catapulted onto the world stage. 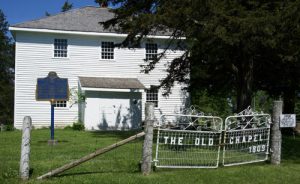 Herein lies a destination that will satisfy the most worldly traveler and discerning gastronomist. Even oenophiles are in for a wonderful surprise. Welcome to your new favourite Canadian destination (you can thank me later).

The story of The Royal Hotel is one of passion, history and preservation. Originally built in 1879, this hotel has stood on Main St. as a centerpiece to the town of Picton for generations. Originally it was a hotel of prestige and elegance attracting visitors via rail, and eventually declining in reputation and maintenance until completely shuttered for a long twelve years. Fortunately for the community and the structure itself, along came the Sorbara family. The patriarch, Gregory Sorbara has an extensive background in provincial politics and real estate development. He came with a vision and a hope to restore the hotel not only to its former glory; but to make it exponentially superior in its end product. 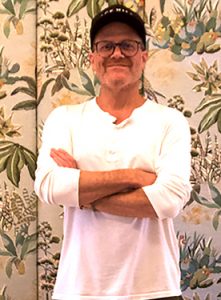 The project needed a visionary to see it to come to fruition which is where the general manager, Sol Korngold stepped in. In spite of the fact that Korngold had no prior hospitality experience of any kind (his background was as an entrepreneur in the technology field), he was able to rise to the occasion through his own creative talents and a symbiotic partnership with the project designers (well-known Toronto architectural firm, Giannone Petricone Associates). Together they have created a hotel that is certain to win hospitality design awards and rave culinary reviews as more and more guests are made aware of its existence. 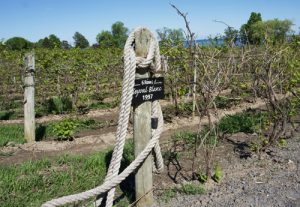 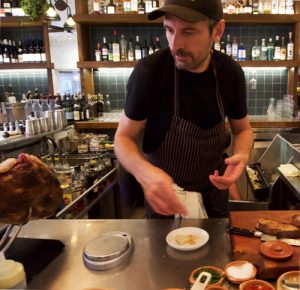 First; a bit about Picton and the surrounding region of Prince Edward County. This area, which is an easy three-and-a-half-hour drive from Montreal, is primarily known for its nascent wine industry and the Caribbean-like beaches of the Sandbanks Provincial Park. However, with the recent surge in popularity as a tourist haven (mainly supported by Torontonians only two hours away) top-rated chefs are now abandoning the grind of the big city and relocating here in impressive numbers and bringing their delectable recipes and skills with them. Case in point, I ran into Toronto’s legendary Jamie Kennedy (Palmerston Restaurant, Scaramouche, Gilead Café and wine bar) and at the Picton Farmer’s Market, open on Sundays in the parking lot behind The Royal. I chatted with him about his current endeavours which, believe it or not, include cooking up gourmet poutines and French fries at the Wellington Farmers Market on Saturdays in the summer months. Or there is also Stuart Cameron (formerly of Toronto’s Mira, Patria and Byblos while executive chef of the Icon Legacy Hospitality) who has opened the Spanish-influenced Bocado (think tapas and the best you have ever had!) on Picton’s Main St. Combine this all with more vineyards, distilleries and micro-breweries than you can shake a wine glass stem at, and you have yourself the ingredients for the quintessential Canadian vacation or weekend getaway. 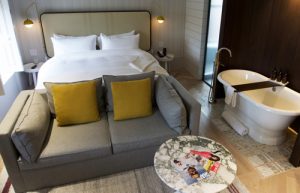 AJ Twist’s room at The Royal Hotel included a soaking tub and a view of the iconic Regent Theatre on Main St.

In terms of accommodations, The Royal Hotel is the newest entry into this market having opened in May of this year and has immediately become the area’s go-to luxury boutique hotel. With thirty-three rooms (all named after a local variety of apple or pear such as “Royal Gala” or “Russet”) it has a sizeable footprint complete with an outdoor swimming pool, a full-service spa, gym, private terrace for overnight guests and an extensive outdoor dining patio.

My room, an “Empire”, was a 380 square foot gem complete with an in-room soaker tub, fireplace (this will be dreamy in the winter months with a side of popcorn), king size bed with Italian linens, a sitting area with café table and chairs for morning coffee, couch, floor to ceiling windows (mine with a view of the iconic Regent Theatre on Main St.) and a beautifully appointed bathroom with plush bathrobes and linens complete with a walk-in shower. For family or friends, this room could also be combined with a “Cortland” room to create a two-room suite. 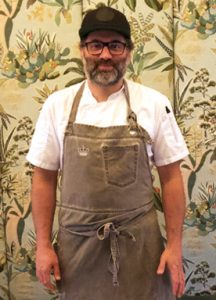 In spite of the design and comfort of The Royal’s guest rooms, the main event is happening daily on the hotel’s main floor where both locals and visitors are flooding in the front doors through the stunning lobby en route some of the region’s top tables which are located in their main dining room. Helmed by Chef Albert Ponzo, formerly of the beloved Le Sélect Bistro, The Royal’s dining room is an inviting enclave of warm wood accented by a circular sculpture inlaid into the ceiling which evokes the feeling of being under a mushroom, and a mesmerizing open kitchen. 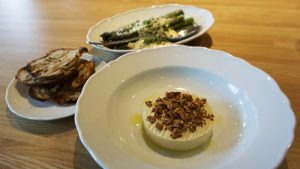 Securing a reservation here can be no small feat, so reserving well in advance is recommended to avoid disappointment. And once you have had the opportunity to taste a few of Ponzo’s farm-to-table offerings (many of the organic ingredients come from the Sorbaras’ 700 acre Edwin County Farm just up the road) its feverish popularity will become tantalizingly clear to you. 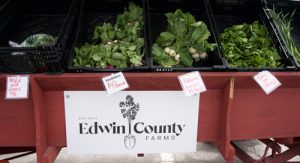 Lunch and dinner menu highlights include an appetizer of smoked whitefish mousse (a favourite from Ponzo’s Sélect Bistro days); a selection of fresh pastas such as pappardelle with braised lamb neck, nettles and percorino; pickerel with beurre blanc, Edwin County Farm vegetables, herbs; charcoal-grilled ribeye steak with red wine jus (this gets AJ’s five fork accolades!); or one of their wood-fired pizzas (try the “Dandelion” with greens, anchovies, Stracciatella and bomba). Naturally an expansive wine list features all of the top PEC vintages many of which may not be familiar to you but can be expertly paired with their sommelier’s guidance. 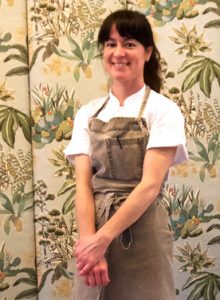 The Royal Hotel’s Pastry Chef, Sarah Villamere held the same role at the Fogo Island Inn before relocating to PEC

In addition to The Royal’s main dining room, the hotel bar located just off the lobby. Here the main dining room’s full menu is available and is also where breakfast is served in the morning along with their café or take-out fare. However, breakfast at The Royal is also an extraordinary meal as it features creations by Fogo Island Inn’s former pastry chef, Sarah Villamere. Here fresh croissants, breads and coffees are all available but more importantly you could try “The Royal Breakfast Sandwich” (truly suitable for royalty!) or the mushroom tartine (two poached eggs, roasted mushrooms, crème fraiche, grilled sourdough). Add a side of their homemade sausage or in-house smoked bacon, and you will be headed back up to your room for a nap before your daily excursions begin.

These days there is much to see and do in Prince Edward County as its hospitality offerings are becoming world class. As word continues to seep out, international foodies and wine aficionados may soon be pushing us Canadians aside for seats at these tables or beds in the guest rooms. Hop in your car and head down the 401 for your own bite of the apple or sip of the grapes before its too late! PEC is a treasure to behold!

For more information on the region visit: Prince Edward County 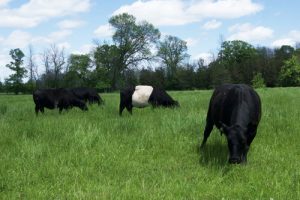 Cattle grazing roadside are a common sight in PEC 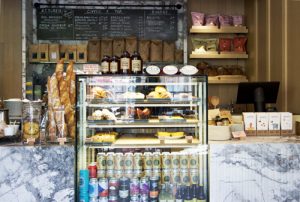 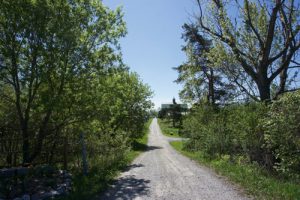 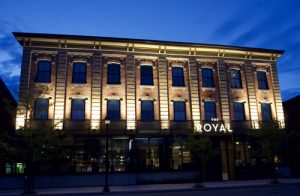 The Royal Hotel’s exterior at night