The always popular three-day Festival Sur Le Canal is back with a full slate of local performers, representing a wide range of musical genres. The family-friendly festival takes place in the Esplanade de Centenaire park, adjacent to the Lachine Canal. Carl Comeau is part of the volunteer organizing team, and he noted that the Festival’s mandate is to promote local talent. “More than ever, we see that it’s important to provide our musicians with an opportunity to perform. Festival sur le Canal is the largest cultural event in the Sud-Ouest, and we’re expecting 30,000 people over the course of the three days.”

“With the help of our sponsors, we’re able to keep the festival free to attend. We have a donation box at the entry for those who are able to make a donation.” The festival area is fenced, so parents don’t have worry about children wandering off. “We see young families coming with blankets when we open for the early shows at noon.”

Evening shows are scheduled every hour, leading up to the headliner performances at 9pm.

“Listening to the opinions of previous attendees and local residents, we’ve expanded our musical offerings to bring in some ‘edgier’ acts for our evening shows. Our Friday night headliner on June 17 is The Planet Smashers, and The Box continuing their 40th Anniversary Tour.” The ‘Smashers’ have kept their zany musical energy by almost continuously touring the world for an incredible 25 years. 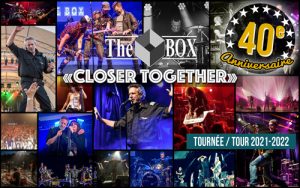 Fredy V and The Foundation will bring their slick R&B show to the stage on Saturday at 8pm. This band of first-call musicians is well on their way to make their mark on the international music scene.

Rob Lutes will take the stage at 3pm on Sunday. Since the release of his first album Gravity in 2000, Rob Lutes has steadily built a collection of exquisite songs that inhabit the intersection of blues, folk, Americana, and the singer-songwriter genre. He is known for his literate, melodic songcraft, his masterful fingerstyle guitar work, which includes elements of ragtime and blues, and his soulful voice which brings depth and an unmistakable intensity to his albums and live performances. Lutes is a multiple Maple Blues Award and Canadian Folk Music Award nominee, a Kerrville New Folk Songwriting winner, and winner of the CFMA for Contemporary Singer of the Year Award in 2018. He has released seven full-length albums, including 2017’s Walk in the Dark, which No Depression called “consistently excellent, as are Lutes’ contemplative lyrics about life, love, death, and the blues.”

Whatever your musical preference may be, just being on the festival grounds and taking in the music, sunshine and good vibes make a visit to Festival Sur Le Canal a lot of fun. For information about performers and showtime, please visit the informative website: www.festivalsurlecanal.com Also on Facebook and Instagram. Enjoy!