If you are at all like me, this working from home business is starting to get a little long in the tooth. Sure, it has its advantages (like a private bathroom and a snoozing couch) but twenty-two months later it sure would be nice to have a change of scenery, no? So when an email from Montreal’s Four Seasons Hotel arrived in my in-box last week with special offer of a “workation” I did not even blink, I said “sign me up”!

To be honest, I was not even sure what a “workation” was, it being a new term for me. Sure, I am familiar with “staycation” (I mean, who isn’t these days, right?) but a workation? That even sounded like an oxymoron to me. However, as I gave the offer a more thorough read and saw that it offered a Premier Room stocked with office supplies, an ergonomic chair, unlimited in-room coffee (with a section of snacks), access to scanning and printing, unlimited premium internet, plus cocktails (and more snacks), it all began to sound like a pretty fine idea!  Not only that, I was further informed that optional add-ons could include a 30 minute hand and foot reflexology treatment, or a 30 minute neck and shoulder massage not to mention the opportunity have an in-room gourmet dinner provided by one of Montreal’s finest restaurants, Marcus Restaurant + Terrace. This workation was beginning to sound more like a dreamcation! 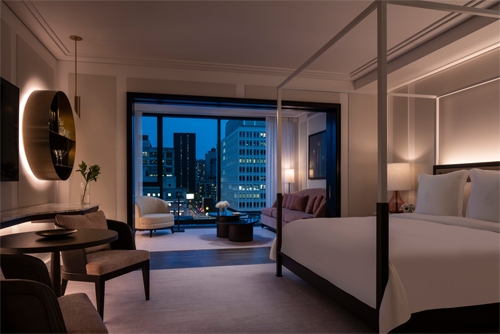 In order to accommodate those wanting to truly work, the hotel allows for both early check-ins and late check-outs so I arrived at 10 am ready for a full day. For those not familiar with Four Seasons Hotel Montreal (for which you are forgiven, since it has only been opened since 2019 and has a rather discrete presence on the street), it is located in the heart of the so-called Golden Square Mile on de la Montagne just below de Maisonneuve Blvd. As I exited my taxi and headed to the third floor reception I was greeted by Anita Tanriover, Director of Marketing and Azucena Paucar, the hotel’s Sales Manager. Both enthusiastically reviewed the workation concept to me and revealed that I was, in fact, the first person to experience it with them since this was Day 1 of the offer. Fine with me! 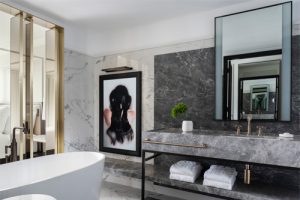 As I was led to my room (one of 169 in this property along with 18 private residences) I could not help but be struck by the stunning art that adorned the walls of the public spaces. Azucnea later proudly advised me that virtually all of the art featured in the hotel was by local artists including the large photographic pieces by Montreal artist Michelle Bui that originally caught my eye. Once we arrived at my room, we entered what can only be described as the most luxurious “office” setting of my career. On the right was a large bathroom with a free standing tub and glass doors opening onto the bedroom (to allow for natural light) as well as a spacious shower stall, marble vanity, ample amenities (from Byredo) and enclosed toilet. Into the bedroom (the Premier Rooms average between 443-558. sq ft) there was an inviting four poster bed, a chaise longue overlooking Crescent Street (and the Leonard Cohen mural), a working space ready to go as well as a small dining table for my upcoming meals. Home away from home or, in this case, my office away from home office. Super!

After the welcoming committee left me to settle in, I connected my laptop, cracked open the Nesspresso machine, surveyed the snack situation, connected to the internet and began to work. It did not take me long to appreciate my new surroundings and realize I could get used this this type of work environment very easily. After a bit of writing and a 30 minute conference call it was time for…lunch! With the help of the in-room virtual Executive Assistant (which was the room’s Ipad in a charging station beside the bed) I surveyed the lunch menu and ordered up some grilled salmon and salad. Twenty minutes later I was enjoying my first great meal of the day. Life is good. 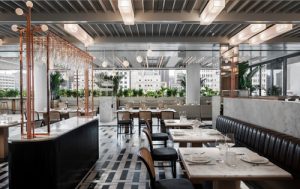 Now it was time for a tour of the property. For this I met Azucena in the lobby who lead me immediately into what is known as the hotel’s “Social Square” which consists of the MARCUS Lounge where light meals and drinks are served in the shadow of the gold-encased elevator banks. Guests are greeted here by one of the hotel’s most interesting art pieces which is a whole white crab shell suspended in a plexiglass glass case as sourced from the famous Parisian taxidermy store by the name of Deyrolle. This was but a teaser for what was yet to come. The interior design of this floor was created by Atelier Zébulon Perron whom have created a number of Montreal’s favourite restaurant spaces such as Gentile’s Café and Pizzeria in Westmount, Grinder in Griffintown and Montreal Plaza in Mile End. As we enter the Nightbar, a happening cocktail lounge featuring a live DJs and  on the weekends, I could not help but notice the immersive forest-themed wallpaper which was especially designed for this space using images from our very own Mount Royal. Neat!

Next up Azucena insists that she must show me the women’s washroom which she calls the most Instagramable of its kind in the city. Certainly from a layperson’s perspective, I would have to agree with her and snapped a few myself. Lining the corridor leading to the washrooms is a mini exhibit featuring two prominent Montreal-based photographers, Gabor Szilasi and George Zimbel. There is particularly great shot of Margaret Trudeau and Andy Warhol as part of the collection. 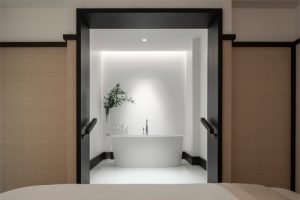 However, the main focal point of the Social Square is, indeed, Michelin-starred chef and restaurateur’s Marcus Samuelsson’s MARCUS Restaurant + Terrace. This is Samuelsson’s only Canadian operation and I can assure you from firsthand knowledge that it is one of our city’s culinary pride and joys. Recently, Chef Jason Morris took over the helm of this fifteen cook team that can produce over three hundred meals any given night. Chef Morris’ experience includes stints working with such legends as Daniel Boulud when he helped open Maison Boulud in the Ritz Carlton hotel here as well as opening his own restaurants Le Fantôme’ and Pastel (now since sold). However, Morris, who started as a poissonier and has also trained under some of Japan’s top chefs, has eased into his new challenge working hand-in-hand with menu planning with his new “boss” Samuelsson. Morris’ talents were confirmed by yours truly when I enjoyed his tasting menu that evening featuring the best sashimi I have ever had followed a melt-in-my-mouth, Wagu-quality filet mignon. A truly spectacular meal and worth the price of admission in itself.

The rest of the tour included a visit to the complex’s gym facility with an impressive equipment installation as curated by celebrity personal trainer Harley Pasternak whose clients have included Lady Gaga, John Mayer, Ariana Grande, Megan Fox and others. Perhaps you have heard of them? This space is only accessible by hotel guests and occupants of the private residences. On this floor you can also find the property’s steam room and sauna as well as one of the city’s most beautiful pools lit by a skylight. Film director Wes Anderson would be tempted to shoot a scene here, it has that nice of an aesthetic. 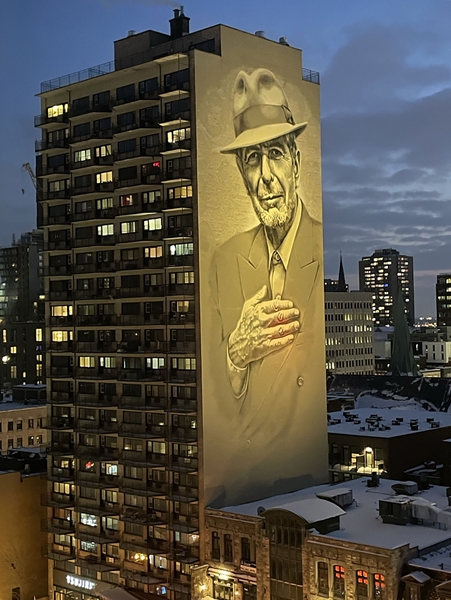 Then we headed to the hotel’s spa which is staffed by the friendliest crew you could hope to meet and has been honoured with Forbes’ Five Star recognition. With its white wood paneling and appropriately curated art one might be tempted to think the word Zen was created here. This is where I enjoyed my neck, shoulder and scalp massage later on after my “hard day at work”.

Finally Azucena took me through a couple of the hotel suites, including a Four Seasons Suite and a Duluxe Signature Suite. These would be the potential workation environments more than suitable for any local CEOs, presidents or business owners who also needed a break or wanted to hold high level meetings in complete discretion. Here the dining areas can host multiple guests and some have more than one bedroom.

Whether you are looking for a workation, a staycation, a romantic get away from the kids (the MARCUS in-room dining is a date-night’s best kept secret) or need a recommendation for visiting friends or family, I strongly recommend that you consider our own Four Seasons Hotel Montreal.