The McCord Museum’s exhibition — Parachute: Subversive Fashion of the ‘80s — runs until April 24, 2022. From its beginnings inspired by New Wave subculture to its position as a veritable international fashion sensation, the Parachute brand from Montreal was recognized from New York to Tokyo for its visionary, bold apparel and innovative concept stores. The exhibition explores the history of the brand, a go-to label for stars like Madonna, Peter Gabriel and David Bowie, while immersing visitors in the exuberance of the 1980s. 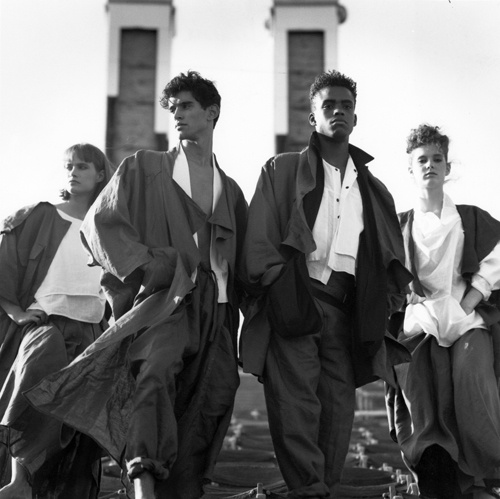 Founded in Montreal in 1977 by British clothing designer Nicola Pelly and American architect and urban planner Harry Parnass, Parachute was active in the world of fashion until 1993. Several factors contributed to the brand’s rise to global phenomenon.

“Through a combination of youth-driven countercultural inspiration, a bold and graphic fashion product, and theatrical, experiential retail environments, Parnass and Pelly lucratively commodified cool urban life at the dawn of the digital age. Parachute, with its authentic, subversive hipness and street credibility, should be considered amongst the vanguard fashion brands that paved the way for the mainstream explosion of streetwear at the start of the 1990s,” says Alexis Walker, Associate Curator, Dress, Fashion and Textiles at the McCord Museum and curator of the exhibition.

As Parachute co-founder Nicola Pelly notes,“We saw our clientele as modern-day heroes and heroines, independent beings in control of their destinies, fighting against conformism and homogeneity. For us, fashion was a radical form of expression and a way to build a strong
personal identity.” “The exhibition aims to illustrate the concepts behind the design of Parachute, and its ties with the urban environment and underground artistic communities in an atmosphere evocative of the ‘80s,” adds Alexis Walker. 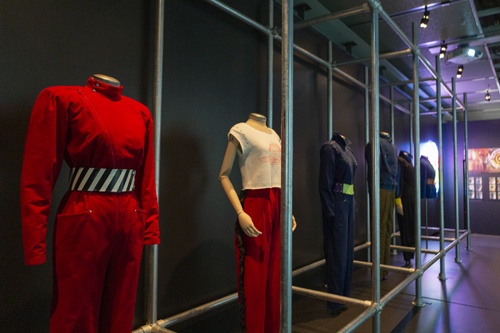 Visitors to Parachute: Subversive Fashion of the ‘80s can admire the androgynous, avant-garde creations of Parachute through some sixty outfits, including two stage costumes from the personal collection of Peter Gabriel. They can also examine over 140 archival documents such as sketches and advertisements, as well as promotional photographs and images taken in Montreal’s night clubs. Finally, they can view exclusive interviews along with video excerpts of fashion shows and concerts, all against a soundtrack of music from Men Without Hats, Peter Gabriel and Montreal group FHANG.

The exhibition is organized into five areas. The first—New Wave Beginnings—recounts the early years of the brand, which was inspired by the emerging Montreal New Wave scene, when the co-founders met in the design studios of Montreal-based fashion retailer Le Château. The second—Collage & Hybrid—presents Parnass and Pelly’s design techniques, a postmodern approach that synthesized sartorial references from various sources to produce challenging and contemporary silhouettes. The third area—Underground Images—illustrates Parachute’s striking, elegant promotional images, which solidified the brand’s subversive, avant-garde reputation while driving consumer desire. The fourth—Music Videos, Rock Stars and Miami Vice— explores the advent of MTV, MuchMusic and Musique plus, networks which broadcast music videos 24 hours a day and had a tremendous impact on the pop culture of the 1980s. This section also references the stars who wore Parachute, including Don Johnson in Miami Vice, Michael Jackson, Madonna and the band Duran Duran. The fifth area—The Store Experience—looks at the cutting-edge Parachute concept stores, notably those in Montreal, New York City and Los Angeles, whose high-tech, industrial aesthetic, at once minimalist and grand, created unique public spaces where people could meet and be seen.

“We are absolutely thrilled to present this social and historical exhibition devoted to a relatively recent period of effervescent creativity and transformation. Our goal is to celebrate the incredible global success of this Montreal brand and recreate the era for those who were part of it while introducing it to younger generations who are fans of pop culture, fashion or the ‘80s. Finally, the exhibition is incredibly relevant for the Museum given that we are home to the largest collection of Parachute clothing, photographs and archives,” explains Suzanne Sauvage, President and Chief Executive Officer of the McCord Museum.

To visit the Museum you must first reserve a ticket online. www.musee-mccord.qc.ca