After years of making you laugh on various platforms, Chaimie and Leizer are coming to you from the main Segal stage! Overflowing with their signature thought-provoking shtick and heimish kibitzing, co-creators Jamie Elman & Eli Batalion are making their Segal theatre subscription debut with comedy, music, video, and more surprises in a love letter to their hometown and community.

No need to leave your house! A recorded version of YidLife Crisis: Pandemish will be available for a viewing period from Thursday, January 27 at 7 pm to Monday, January 31, at 11:59 pm, to watch from the comfort of your house. Watch it once, twice, or on a loop during those 5 days – hey, we won’t judge, we’ll probably be doing the same thing!

Jamie Elman is an actor, writer, director, producer, and musician. He has appeared on some of television’s most acclaimed series including Mad Men, Curb Your Enthusiasm, and House M.D. and for three seasons of NBC’s critically lauded drama American Dreams. His breakout role was Cody on the FOX/YTV teen sitcom Student Bodies. Segal Centre audiences will remember Jamie as the combative Liam in all three runs of Bad Jews in Montréal and Toronto. Career film highlights include California Dreamin’ (Grand Prix, Un Certain Regard, Cannes Film Festival), When Nietzsche Wept (portraying a young Sigmund Freud), and the series finale of beloved Canadian drama Bomb Girls. Voice work includes animated Disney blockbusters Wreck-It Ralph and Frozen. He co-created and starred in the web series crazy/sexy/awkward for Fremantle Media, which was acquired by Howie Mandel. He is also a pianist and singer who has recorded with Ben Harper, Natalie Maines, and Rickie Lee Jones. 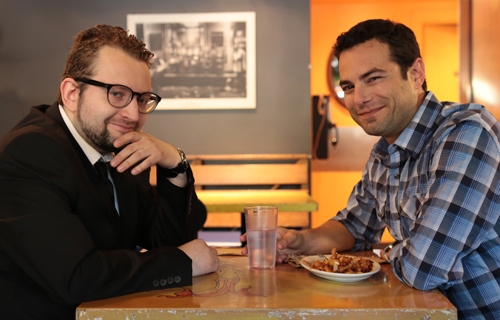 Eli Batalion is a writer, producer, director, actor, and composer for film, TV, the web, and the stage. He began his career in musical theatre with the hit the award-winning internationally touring play JOB: The Hip-Hop Musical. He and partner Jerome Sable evolved their theatre work to the screen with the musical horror comedy short The Legend of Beaver Dam, selected to TIFF, Sundance, Berlinale, and over 75 global film festivals, and to the feature horror musical comedy Stage Fright featuring Minnie Driver and Meat Loaf, and produced by Serendipity Point Films. His writing/directing start-up feature film comedy, APPINESS, was released through distributor Gravitas Ventures.

To purchase your ticket visit: www.segalcentre.org