The Studio de musique ancienne de Montréal once again takes the opportunity to showcase its excellence in a performance of three of Bach’s most popular cantatas. The well-known cantata Wachet auf, ruft uns die Stimme was clearly also a favourite of Mendelssohn’s who quoted its title chorale in his oratorio Paulus. Concluding the program is one of the most well-liked and frequently performed of Bach’s cantatas, Herz und Mund und Tat und Leben, which owes its popularity chiefly to the transcription for piano of the final chorale, the beloved Jesu, Joy of Man’s Desiring.

Known for her lush voice and dramatic artistry, soprano Stephanie Manias is a frequent performer in the greater Montreal area. She is heard regularly as a soloist and chorister in some of Canada’s most celebrated ensembles, such as Studio de Musique Ancienne de Montreal, the Chorus of the Orchestre Symphonique de Montréal, and La Chapelle de Québec.

A versatile and flexible performer, some of Stephanie’s recent engagements include works by Bach, Monteverdi, Mozart, Haydn and Strauss.

Originally from Quebec, Marie-Andrée Mathieu is appreciated for her agile voice and for her great musical expressiveness. Named “Jeune espoir lyrique québécois” by the Jeunes Ambassadeurs Lyriques, Marie-Andrée Mathieu was recently invited to sing in Germany, China, Slovakia and Italy. Admitted to the prestigious Queen Elisabeth Competition of Belgium upon graduation, and more recently to the Montreal International Musical Competition, she is also a finalist in the International Marmande Competition and the Montreal Symphony Orchestra Competition.

She performs regularly as a guest soloist. Among her main engagements are Beethoven’s Mass in C major with the Slovak State Philharmonic Orchestra, Bach’s Saint John Passion with the McGill Chamber Orchestra and Bach’s Mass in B minor with the choir and orchestra of the Bishop’s University.

Since her debut on stage, she has performed a wide variety of musical styles, including Brazilian music and French song. Among other projects, she is the lead singer of the ensemble La Virevolte. She is also a member of the La Chapelle de Québec chamber choir.

Tenor Michiel Schrey was born in the Netherlands and raised in Kingston, Ontario, and is well-known to concertgoers in Montreal, his adopted home. He has performed in concert and oratorio throughout Canada as well as in the United States, England, Austria and South Korea. He has sung opera and Baroque opera, from the earliest works such as Monteverdi’s Orfeo and The Coronation of Poppea, to great works of Gluck, Mozart, Verdi and Strauss, and numerous premieres. He has been a soloist and ensemble singer with the Studio de Musique Ancienne de Montréal for more than 31 years.

He starred in several recent productions with the Ensemble Contemporain de Montréal, including the “comic-book-opera” Hockey Noir, which premiered at the Monument National, and played in Brussels and Mons, Belgium. He is at present also working on a new opera by Tim Brady. Michiel began teaching Voice at Concordia University in 2014.

Montreal baritone Clayton Kennedy has been a featured concert and oratorio soloist with many Canadian ensembles and in a great diversity of styles. He is drawn particularly to early music, baroque oratorio, concert music, as well as premiering contemporary works. He made his debut with the Montreal Symphony Orchestra as baritone soloist in Faure’s Requiem in May 2013. In the fall of 2014 he took part in a concert of sea shanties at Bourgie Hall with Montreal ensemble La Nef, reuniting with musicians with whom he recorded material for the Ubisoft video games Assassin’s Creed IV: Black Flag and Assassin’s Creed: Rogue. He has also recently performed as a soloist in Vaughan Williams’ Dona nobis pacem, with the Church of St. Andrew and St. Paul, Monteverdi’s Vespers with Musica Orbium, Brahms’ Ein deutsches Requiem with McGill Choral Society, as well as J.S. Bach’s Magnificat with Le Choeur de l’UQAM and Ensemble Caprice.

Raised in the British choral tradition, Andrew McAnerney is a versatile and accomplished conductor, singer, and educator. Andrew studied music at the University of Oxford (Magdalen College) and built his career performing with many of Europe’s finest vocal ensembles including the world renowned Tallis Scholars. 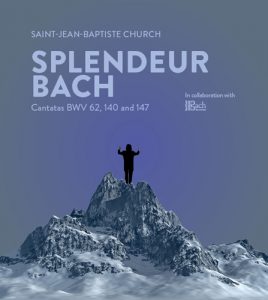