Simple Plan recorded a modern rock Christmas classic in 2001, with “My Christmas List.” To help spread holiday cheer this year, the Montreal-based band has just released “My Christmas List” on all DSP’s. The band also premiered a new visualizer for the song on its YouTube channel, which can be found by going here.

“My Christmas List” was initially released as a radio promo track and later as a bonus track on No Pads, No Helmets… Just Balls, Simple Plans’ 2002 debut album on Atlantic/Lava. Since then, the album has been certified multi-platinum in countries all over the world. 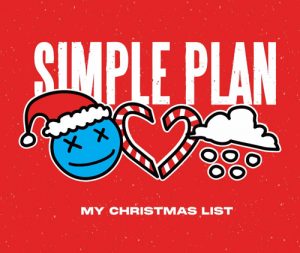 An unconventional holiday song, “My Christmas List,” pairs Simple Plan’s irresistible pop-punk sound with lyrics that lean into the commercial side of the yuletide season with the band’s singer Pierre Bouvier proclaiming, “It’s Christmas, and I want everything now.”

The band notes, “We’re so excited that our fans will finally be able to listen to “My Christmas List” and add it to their holiday playlists! They’ve been asking us for years and it feels great to give them an early Christmas present! This was the first song we ever released, even before our first album “No Pads, No Helmets…Just Balls”, and 20 years later, it still holds a special place in our hearts. We wish everyone a great holiday this year – have fun, be safe and stay healthy!”

In January, Simple Plan will hit the road with The Offspring for a 21-date Canadian tour. It will begin on January 27 in Moncton and end on March 3 in Vancouver. For more information, visit the band’s website: https://officialsimpleplan.com/tour/.  The band also have a new single “The Antidote,” which is out now.

Simple Plan was already a multi-platinum success in 2020 when the group became social media stars. Nearly 20 years after the band released its infectious debut single “I’m Just A Kid,” the song became a sensation on TikTok thanks to the #ImJustAKid challenge. For the challenge, family members posed to recreate a vintage childhood photo with the song’s iconic chorus serving as the soundtrack as the video transitions from the current-day recreation to the original image. The challenge led to over 3.5 million videos, garnering over 4.2 billion views on TikTok. All this activity pushed “I’m Just A Kid” to platinum certification as a single by the RIAA.

Simple Plan experienced another massive TikTok moment thanks to the theme song the band recorded for the animated series What’s New Scooby-Doo? On TikTok, nearly 430,000 videos featured some form of audio from the track. In addition, the hashtag #whatsnewscoobydoo has more than 57 million views on the platform. The song was officially released on all DSPs earlier this year and is available now.