“I don’t know. I just think it’s a matter of not wanting to feel like I’m being left out so I just want to get in there and get my fingers in everything,” Kim Richardson laughed hysterically when pressed about why she’s involved in so many artistic and creative endeavors.

“I think I got the work ethic from my mom.” Kim’s mother of course is legendary Canadian blues and jazz vocalist Jackie Richardson. “I was raised by a single mom, and she always stayed on the grind. She had her day job during the day. She was doing her gigs at night. She also mixed it up quite a bit. She was doing theatre. She was doing shows. She toured a lot when I was younger. She was always moving, moving, moving and always had these great stories to tell. She did this. She did that. It always kind of intrigued me.”

Not only did Richardson have a mother who was a veteran of the entertainment industry, but her aunt Betty Richardson is an established blues and jazz singer as well while her cousin Gairey Richardson was one of the hosts of the popular TVOntario children’s show “Polka Dot Door” in the 80’s.

Richardson’s climb to the top of Canada’s music industry was fast and swift due to her incredible vocal talent.

Born in Richmond Hill, Ontario and raised by her single mom who knew the ins and outs of the industry, her foray in the biz all came by accident.

“It basically started out as me wanting to help out a friend who was writing songs. He said I need a singer to demo my songs. He was shopping the songs and it just happened to get in the hands of the person who was the head of A&M (Records) at the time, and he said, ‘Oh, who’s that singer?’ The next thing you know (the label said), you want a record deal?”

“I’m like, whooooah, what? That wasn’t even on my radar at the time”

The 19-year-old phenom recorded and released her first single He’s My Lover in 1985 and it won her a Juno Award for Best Promising Vocalist. The following year, her next single Peek-A-Boo won another Juno for Best R&B/Soul Recording.

Richardson, struggling young single mother who worked several jobs to support her daughter including waitressing at a Red Lobster restaurant on Younge Street in Thornhill, caught the young talent by surprise. 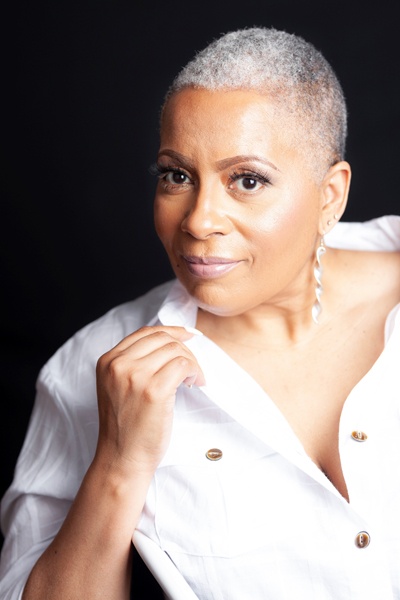 “This lovely gem just popped into my life, and I was like of, I guess we’re doing this now,” she laughed.

Even though Toronto has long been the Mecca of Canada’s entertainment industry, for some reason Montreal mysteriously found Richardson and brought her to our fair city.

“My feeling of being home happened when I came here” (Montreal). “T.O. is a tough town. My experience with Toronto was having to come up to snuff. I felt like Jackie Richardson is your mom, so you better bring it. I always wondered if people thought I was getting gigs because I was Jackie’s daughter. I think moving here, cleared the slate. I had to put the hard work in, but I knew very early on, just months after coming here (Montreal) that there would be a place for me here.”

Not long after coming here she met guitarist Kat Dyson and bassist Rhonda Smith, both who would later go on to play in Prince’s band. The two seasoned musicians would indoctrinate Richardson into the local scene with Smith even playing with Kim in the Montreal jazz-fusion group The Merlin Factor.

Dyson would introduce Richardson to Black Quebec entertainment trailblazer Normal Braithwaite, who would immerse Kim into the city’s francophone scene as well.

Gospel is where Richardson’s heart truly is. “It’s beyond feel-good music. If I could actually do this (gospel music full-time, I would. It’s just that you can’t make a living doing gospel full-time here in Montreal,” she softly chuckled.

Never one to shy away from projects that keep her busy, whether it’s selling her own homemade cheesecakes, doing theatre, or appearing on the big screen, Richardson is always game. She’s appeared in several Canadian films, including Funkytown, about Montreal’s historical disco scene of the 70’s. She won a Genie Award for Best Original Song for the track Waiting For Your Touch featured in the film. Last year, she had a role in the Canadian horror film Hall. “Well luckily I don’t get eaten up or chopped up” she laughed hysterically. “I don’t think I would have signed up for that. They spared me!”

Her debut full-length album Kaleidoscope was released in 2006 followed up by her sophomore set Mes Amours in 2011.

She’s hoping to work on new material soon for a new record but keeps her chops up by performing live. Richardson performed an outstanding set this summer at an outdoor show at The Boardwalk in Sainte-Anne De Bellevue, where she electrified the crowd by doing classics by: Prince, James Brown, Aretha Franklin and Lenny Kravitz.

As far as the long gap between album releases, she explained; “I needed something to say. I took a break from releasing new music. I had to say what do I want to say. So, until I’m in that spot, I’m not exactly motivated. But I got quite a few people who are part of my team who always say ok Kim, whenever you’re ready, we’re ready. I’ve got to say something. It’s got to mean something. But when I’m ready, I just have to say, ok let’s do this”

Well with a voice like hers, we hope she decides to do it soon!