One of five editorial cartoonists being honoured with a stamp, “Aislin” is commemorated for 50 years of thought-provoking work

Terry Mosher is a mischievous wag with an aptitude for tweaking noses. Best known as an editorial cartoonist, he is also an accomplished historian and effortless storyteller, with 52 books to his credit. At 78, he remains a work in progress.

Mosher began his career drawing portraits and caricatures of tourists in the 1960s and was one of the founders of Artists’ Alley, an open-air gallery on Rue du Trésor in Québec – still a popular attraction.

Mosher has drawn for more than a half-century under the pen name Aislin. He began at the Montreal Star in 1967 before moving to the Montreal Gazette five years later. He still draws two cartoons a week for the Gazette, adding to the more than 14,000 over his career. Some of his cartoons have appeared in Time, The Atlantic Monthly, the New York Times International Edition, Punch and National Lampoon. He’s earned two National Newspaper Awards, a gold National Magazine Award and five individual prizes from the International Salon of Caricature.

Terry Mosher spent his early life in Ottawa, Toronto and Montréal before he quit high school to hitchhike across North America. After two years, he landed in Québec, where he drew portraits and caricatures of tourists in the streets and began signing his cartoons as Aislin – to distinguish them from his more serious artwork. 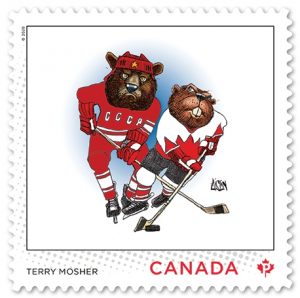 Travel broadened Mosher and gave him a greater understanding of the country’s two solitudes. He was comfortable living in Toronto, then in Montréal and then in Québec. “How good a preparation is that to be a political cartoonist in Canada, to be equally at home on rue Saint-Jean as on Queen Street in Toronto?” he says.

In Montréal, Mosher lived near the Forum. At age 12, in 1955, he witnessed the Richard Riot.

“I realized, wait a minute, some of these French people are pretty angry. And it’s not just hockey. They were pretty angry about things. And I think that was maybe the birth of me… having a real interest in what was going on in Quebec.”

Early in his career, he covered the 1972 Summit Series, travelling to Moscow. One of those images was chosen for the stamp honouring Mosher.

Aislin was one of the first editorial cartoonists to regularly get sports on the editorial page. “I thought, ‘I’m not just a political cartoonist. I can draw anything that people are talking about out there.’”

His favourite sports story involves an obscure rule from the early 1900s that allowed newspapers in major league cities to nominate a cartoonist for membership in the Baseball Writers’ Association of America.

He was accepted and, after a decade, got to vote on candidates nominated to the National Baseball Hall of Fame. Pitcher Fergie Jenkins became the first Canadian to be elected in 1991 – by a single vote. “I like to think it was mine!” Mosher says.

How do politicians react to his depictions? “I think most clever politicians grin and bear it, but some really enjoy it.” Robert Bourassa, former Quebec premier, “loved the cartoons that were drawn of him – even some of the really tough ones.”

Believing that “no person or no thing is ever perfect,” Mosher upholds cartoonists’ satirical role, despite the controversies and criticism cartoons can provoke. “We all have faults and weaknesses,” he once said. “Can we admit as much by laughing at our frailties?”

His 52nd book – Aislin’s Favourite COVID Cartoons from Around the World – was just released in September.

Terry Mosher’s stamp will be available at canadapost.ca and postal outlets across Canada on October 8.

These talented Canadian artists have made us laugh, reflect and cry with cartoons that tap into the emotions of a country. Their combination of humour and art has enlightened and entertained us, contributed to national debate, and brought attention to unfairness and injustice. Canada Post is proud to honour their enormous contributions to Canadian media and society.

A live panel discussion with the cartoonists and Ian Macpherson, Duncan’s son, will be held online on October 8 at 11 am, ET. Register for the webcast here.

The Editorial Cartoonists stamps and collectibles will be available at canadapost.ca and postal outlets across Canada on October 8, 2021.