Terry Mosher has just published another book of editorial cartoons – but this time there is an important difference. He’s assembled editorial cartoons from fellow cartoonists from around the world about the common world-wide topic: COVID-19. “I had an idea of doing a collection of cartoons about the pandemic, and that there would be a theme that would follow the course of the pandemic. I also decided at the outset that some of the proceeds would go to the Lachine General Hospital, in recognition of the selfless work that the frontline health care workers performed and continue to do so with every shift.” 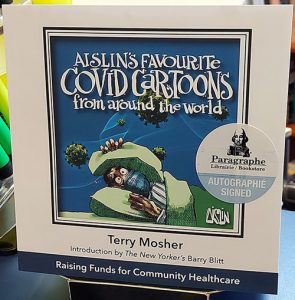 It was during a conversation with a colleague during the genesis of this book that his friend suggested he contact a Norwegian cartoonist about the book. “As it happened, I knew the guy from one of our international conventions. He remembered me and as soon as I said we’d be donating some of the proceeds to the local hospital – he was all in. Moreover, he didn’t want any money – he wanted it to go to the hospital.”

And so, a pattern emerged. The Norwegian cartoonist suggested another couple of names. “The thing just mushroomed,” Terry says with a chuckle. “It was heartwarming that they all donated their work, enabling us to give more to the hospital.” The introduction by Barry Blitt of The New Yorker underscores Terry’s reputation and the enthusiastic response from the international cartoonists’ community.

“I was referred to a guy in South Africa, and I was floored when he said; ‘Terry, I’ve loved your work for years – of course you can have some of my work.’ And it went on like that all around the world, including places like China and Iran.”

“What came out of this was my appreciation that we cartoonist are a club. This collection reflects the solidarity that we have. We’re not always funny, but we are able to see the heart of an issue… like that time that Serge Chapleau and I did essentially identical cartoons after 9/11 – without and word of communication between us.” 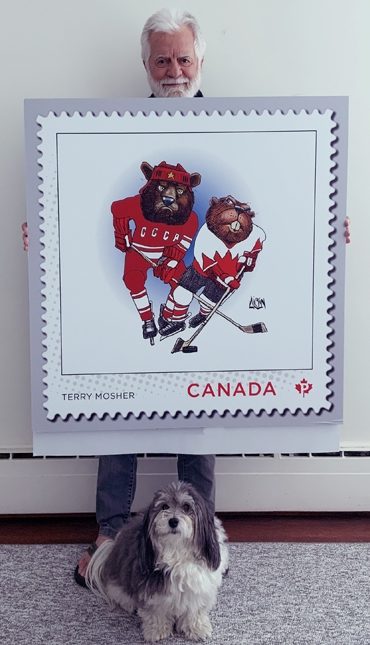 Terry and his wife Mary Hughson have learned a lot about the mechanics of book publishing over their last three or four books. “I’ve learned that a few lines of text to provide some context is a good idea.” In addition to editing by Mary’s sister Janet Hughson and art design by Mary, the couple have learned a lot about what works for them in terms of distribution. “We had as small booth at Comicon and sold a ton of books there, and to a new and younger audience.”

Terry has been selected by Canada Post for a series of stamps honoring five Canadian Editorial Cartoonists. His fellow honorees include; Terry’s friend and colleague Serge Chapleau of LaPresse; Brian Gable of The Globe & Mail, Bruce MacKinnon of the Halifax Chronicle Herald and the late Duncan Macpherson of The Toronto Star.

Canada Post selected a cartoon from the 1972 Canada-Russia Hockey Summit Series. “I travelled with the press corps, and actually attended the games.” Terry’s work has been recognized with the Order of Canada, and I asked him where ‘the stamp’ ranks. Responding, Terry’s smile lights up the room; “I’m immensely proud of my Order of Canada. But I have to say, this stamp is special – perhaps because its so public. Everyone who buys stamps will see my cartoon.”