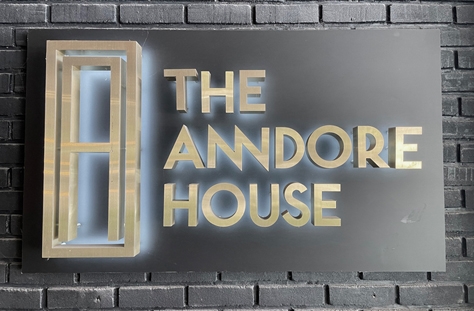 The Anndore House is centrally located in downtown Toronto, close to Yonge and Bloor

My base camp for this trip was The Anndore House, a 113 room and suite boutique hotel centrally located on Charles Street just a stone’s throw from Yonge street (and a five minute walk to Yonge and Bloor- the city’s epicentre). The Anndore House was a spot that had been recommended to me by Toronto friends as a hotel that I might enjoy. Well, thank you, my friends – you nailed it!

The Anndore House was originally known in the 60s as a Toronto institution primarily for its reputation as a residence hotel with a preeminent jazz club on the main floor. Here it would not have been surprising to see Tony Bennett performing; with Eartha Kitt holding court at the bar while nursing a martini. As they say “if these walls could talk”!

Flash forward to 2021, and we find a completely refurbished hotel that has drawn elements of its past. Each room has its own iPhone-compatible turntable and curated collection of vinyl “from the day”. Tom Jones, anyone? Herman and the Hermits more your speed? Don’t see anything that you like? Call the front desk. The collection is vast. 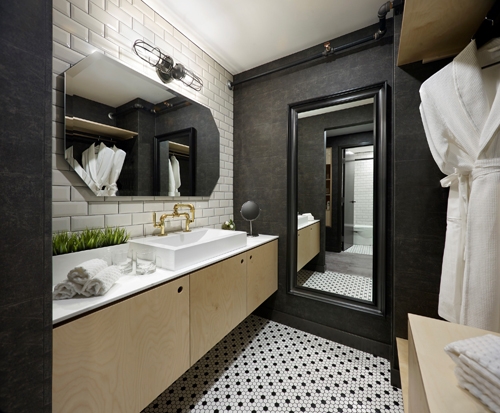 The decorating nods to past eras do not stop here. Toronto interior design team of Cecconi Simone Inc. were tasked with the challenge of re-decorating the rooms into a distinctive ambiance. Touches included so called “subway tiles” in the guest bathrooms and exposed brushed brass piping and fixtures. Studio Munge designed the public spaces and dining area.

The guest rooms themselves feature such details as rotary-style phones that Alexander Bell himself would be proud of as well as striking black and white photographs by legendary rock star photographer, John Rowlands. My room had a great shot of Rod Stewart in the entranceway while Jimi Hendrix watched over me from his stage while I slept. My room included a retro inspired refrigerator by SMEG and matching electric kettle for the coffee service. Even the furniture has that updated 70’s rec-room feel that has re-emerged as a popular design trend. A wonderfully curated art collection adorns most of the dining room walls. Fun!

My comprehensive tour of the hotel by General Manager, George Sovatzis, began in the hotel lobby which is tiny but functional. However, space here is at a premium as the co-habitant, the extremely popular restaurant and bar, Constantine (managed and operated by the Mercatto Hospitality Group) dominates this area. Mind you, this is a good thing as there is lots happening at Constantine and when reservations are tough to secure (which is most of the time) hotel guests do have some “pull” to get a table. Restaurant guests have a choice of sitting at high stools that surround the massive open kitchen where the hustle and bustle of the kitchen staff can be observed. If the bar scene is more your speed, a cozy cocktail lounge atmosphere can be found at the front of house where local office workers tend to congregate during the weekday happy hours. In addition, Constantine features two outdoor terraces, one on the main floor while their other “secret terrace” is on the next floor up and there is, of course, traditional restaurant seating in the main dining room. 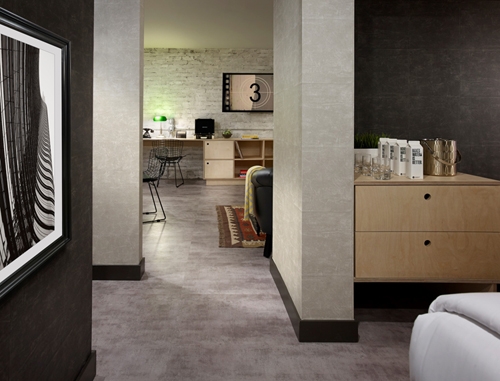 Also on the main floor is the Crow’s Nest which is a “barber shop” and small café (for quick bites and wonderful coffees). With its traditional barber shop fixtures such as three classic barber chairs and shampoo stations all immersed in pink pastels. I felt I had stepped into movie set intended to mimic a Miami-Vice vibe! Nonetheless, if you are need of a quick trim or straight razor shave before that big business meeting, a stop here is just the ticket to closing the deal.

With the tour complete, it was time to get ready for dinner. What better place to start my dining extravaganza in Toronto than right here, at Constantine’s, right?

I had invited an “ex-pat” friend of mine from Montreal who had been living in Toronto for the last year or so. When he arrived he was not only shown upstairs to the secret terrace but within this space was our own private terrace for two. We certainly were getting the VIP treatment!  Both of us were thoroughly impressed and appreciative. Spoiler alert: dinner was spectacular.

For an appetizer we were treated to Chicken Galantine which was a sharing plate of boneless chicken, chicken mortadella dripped with a fermented strawberry mustard. Tasty, flavourful. A perfect launch! 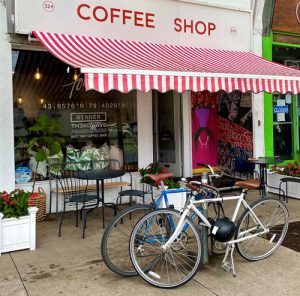 Next up I had an asparagus salad comprised of Spring greens, asparagus, compressed strawberry, cherry tomato and dressed with a cider vinaigrette. My dining companion had a Caponata Eggplant with almond and raisin agrodolce which he wolfed down with glee. For our mains, which were presented to us by the restaurant’s sous-chef, Adam Lafleur, I had chosen the Fogo Island Cod served with heirloom potato and celery salmoriglio. My buddy had the Beverley Creek lamb burger (a restaurant favourite) garnished with whipped feta and tomato jam. His fries looked irresistible with a dipping sauce of harissa aioli. No, he refused to share! The meal was paired with a glass (or two) of Barco Reale red wine.

We did not think the meal could get any better until… the dessert arrived! I had the Mahalabia which was a wondrous potpourri of pistachio, rosewater, and strawberry while my friend could have ascended to heaven with a contented smile after his Dark Chocolate Cremeux which consisted of milk chocolate, hazelnut feuilletine, white chocolate diplomat and an earl grey gelee. What a great meal all served with remarkable attention and a touch of fanfare.

The next day I set off to explore the city on one of two bicycles that are loaned to Anndore House guests on a first-come, first-served basis. I am a biking fanatic, so this was my ideal mode of transport for a relatively flat urban landscape. I donned my bike helmet which I had brought along and received a cautious but helpful warning about the dreaded streetcar rail tracks which plagues all of the local cyclists. 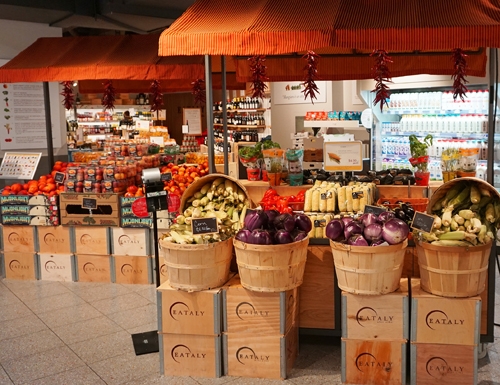 My first stop was one of my cherished destinations, Eataly. Located in the Manulife Centre on Bloor just west of Yonge, Eataly is an Italian-themed food emporium and collection of restaurants and take-out counters that originated in the U.S. This is their first Canadian outpost. Walking into Eataly is indeed reminiscent of a tour through an Italian street market with cut flowers at the entrance and fresh fruit and vegetables displayed on brightly covered market carts. Take-away food stations include a pizzeria, café and many freshly prepared sandwiches and salads. There is a wide selection of wines by the bottle available for purchase, a fish monger, butcher, fresh pasta, hand-made chocolates, imported canned goods and, of course, Italian cheeses galore.  I could eat three meals a day in Eataly and I have been known to do that on previous trips here (or New York City) to the chagrin of my friends and family. Toronto envies our TIME OUT food hall, Montreal envies their Eataly! At least, I do. 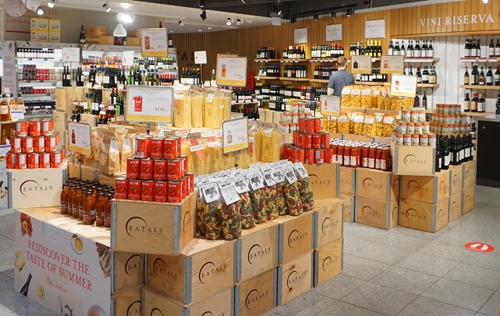 Another of my regular treks while visiting this city is a visit to Kensington Market, just west of Spadina and bordered by College St. on the north and Dundas St. on the south. This market is a labyrinth of small streets lined with small food boutiques (Rasta Pasta is popular), restaurants, bakeries, galleries, clothes and cannabis shops and cafés.

One of my newer discoveries has been Ossington Avenue which is about 14 blocks west of Bathurst. Here one will find some of the city’s trendier restaurants such as the Middle-eastern fusion Azhar Kitchen and Bar located at 96 Ossington (roughly mid-way between Queen and College Streets). At Azhar’s foodies will want to sample everything while Instagrammers will want to photograph everything. While the food certainly looked delicious, I opted instead to try La Cubana just a few doors south.

Certainly, Cuba is not traditionally known for its food but in this case, all preconceived taste notions should be left at this doorstep as La Cubana serves up the best Cuban food anywhere! Owned by a French classically-trained chef whose parents were from Cuba, this French influence elevates her Cuban-inspired dishes to heights never tasted before! On their sidewalk terrace, I had a Chicken Medianoche sandwich which was a glorious stack of roasted achiote chicken thigh, fresh avocado spread and a tomato slice served on a warm bun with a side of crisp coleslaw. I started with their conch fritters which were many times better than any I had ever had in Havana. La Cubana will now on my regular circuit for subsequent trips! 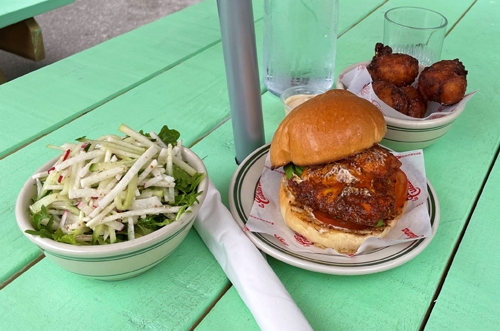 Other visitors who prefer art over food discoveries will be interested to know that the long- delayed opening of Andy Warhol (featuring four decades of the iconic pop artist’s works as organized by London’s Tate Gallery) is now on display at the Art Gallery of Ontario (until Oct.24, 2021).

There are many reasons to visit Toronto be they business or pleasure and, if you need a place to stay, the Anndore House can serve as both party central for you or simply a place to sleep and re-charge following a busy day of meetings. Either way, they would love to see you soon!