This month we explore some exciting attractions that would be ideal for a family holiday, plus a visit to Cluny Bistro in the historic Distillery District

Toronto’s Bloor Street has been described by Vogue Magazine as the “second trendiest street in the world. Nicknamed the “Mink Mile” the stretch of Bloor from Yonge Street west to Avenue Road is home to many high-end retail stores, anchored by Holt Renfrew and Harry Rosen flagship stores. Other notable brands include; Hermès, Louis Vuitton, Gucci, Prada, Chanel, Hugo Boss, Diesel, Cartier, Burberry, Dolce & Gabbana, Escada, Cole Haan, Porsche Design, Tiffany & Co., Coach, Victorinox Swiss Army, and Michael Kors. The iconic facade of the University Theatre has been retained and is the home of the Pottery Barn. It’s a shopper’s paradise.

We’re going to add to the previous article about the musicals and jazz scene in Toronto. In this installment – we’ll have a look at some family-oriented activities; especially with March Break approaching. We’ll also tell you about some restaurants we enjoyed and The Germain Toronto Hotel on Mercer Street, right in the heart of the entertainment district. We purchased a Toronto City Pass and received significant discounts to the attractions we visited. It’s a really good program that is widely used and readily accepted at ticket counters.

The city planners developers have created an enormous attractions complex in the downtown area between the waterfront and Front Street. Home to the Toronto Maple Leafs and The Raptors Basketball team, The Air Canada Centre is located near the foot of Yonge Street, within easy walking distance of Union Station and the GO Trains coming in from the surrounding suburban communities. Nearby is the Rogers Centre, home to Canada’s baseball team, The Toronto Blue Jays. A short walk further on you’ll find the CN Tower.

Adjacent to ‘the tower’, we enjoyed our visit to the spectacular Ripley’s Aquarium of Canada. It’s an outstanding exhibit, with the key excitement factor coming from the glass tunnels that enable visitors to walk beside and under a vast array of sea life; multi-colored fish, sawfish and everyone’s favourite – sharks. Lots of sharks! 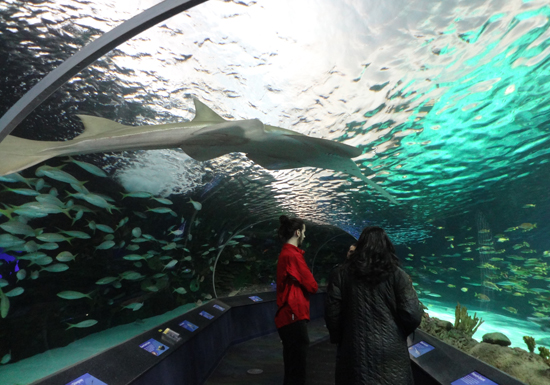 Ripley’s Aquarium has an abundance of interactive opportunities for children and youngsters to enjoy a hands-on learning experience, including an open (supervised) exhibit that allows visitors of all ages to pet the rays. The glassed-in viewing tunnel is North America’s longest. There is also a mini child-sized tunnel that was immensely popular with children. There are 16,000 aquatic creatures within the Ripley’s Aquarium in various galleries that include Canadian Waters, the Rainbow Reef with its brightly coloured tropical fish, the Dangerous Gallery that is home to the sharks, and Ray Bay. There’s an interesting exhibit showing how the huge pumping stations work. It’s an ideal destination for families, where you could easily spend several hours. It’s a good combination with the adjacent CN Tower. Of Note: Ripley’s hosts jazz concerts every other Friday evening. www.ripleyaquariums.com/canada
Timesaver Suggestion: Purchase your tickets online before travelling to Toronto.

The Art Gallery of Ontario and FRANK 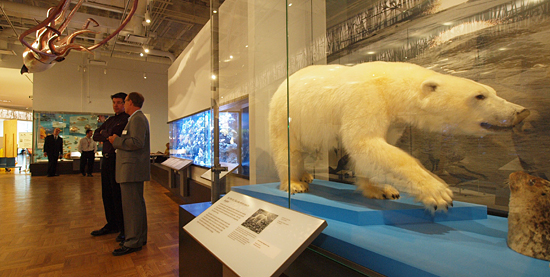 The Art Gallery of Ontario is home to the largest collection of Canadian art, including the Group of Seven. The AGO also has a tremendous permanent collection spread out over five floors. They include African and Oceania, European Modern and Contemporary, Photography, Prints, and more. The AGO’s Old Masters Collection is comprised of three pillars of strength: Dutch painting from the 1600s, Italian painting and sculpture from the 1600s, and French Salon and Impressionist painting from the 1800s.

Visual Art enthusiasts can easily spend a good part of a day exploring the AGO. There is a coffee shop, but we recommend that you make time for a proper sit-down lunch or dinner at the museum’s restaurant, FRANK. We visited on a Sunday, and it was full – a good sign. We only waited about 10 minutes for our table, but it was worth it. The varied menu is available on line. We really enjoyed our Sunday Brunch, and we recommend saving room for dessert. The kitchen is open to the multi-level restaurant.  Lunch is served from Noon – 2:30 pm Monday to Friday, Brunch on Saturdays and Sundays from 11am – 2:30pm, Cinq–à–Sept from 4 – 7pm Tuesdays to Fridays, and Dinner from 5:30 to 10pm Tuesday through Saturday. Note: Like most museums, The AGO is closed on Mondays. For information about exhibits, to make restaurant reservations and to purchase entry and exhibition tickets; www.ago.ca 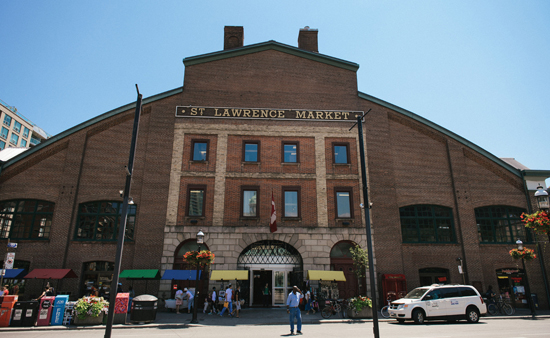 Once in a while in the travel writing business we meet a larger-than-life character who is both a great raconteur and knowledgeable about their subject matter. We met Bruce Bell for a guided tour of St; Lawrence Market and the surrounding area. Our 90 minutes with this charismatic story teller passed much too quickly; we were entertained and educated. Bruce explained how in Toronto’s early days, the St. Lawrence Market was the economic hub of the city. Taking us through the building, Bruce charted the building’s history, including the temporary jail cells in the lower level. Our tour extended to the Old Town Square and St Lawrence Hall, constructed in 1850 as Canada’s first music hall and is still in regular use after being restored as a Centennial project. 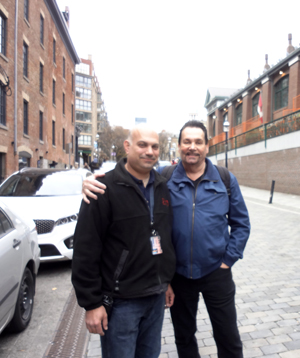 We visited the historic St. James Cathedral, where one of the stained glass windows depicts King John signing the Magna Carta. Bruce explained that most of the old wooden structures were destroyed in the Great Fire of 1849. He inserts just enough of his personal history into the commentary to keep the tour relaxed and fun. For many years, the City of Toronto didn’t identify the historical significance of its buildings. To correct that oversight, Bruce commissioned and installed 100 plaques at his expense between 2004 and 2012, to identify historical structures. Bruce offers guided tours of other parts of Downtown Toronto, and we heartily recommend that you sign up for any one of his tours. If you’re holding a business meeting, a Bruce Bell Tour would be a very popular outing. Whether visiting for business or pleasure, one of Bruce’s guided tours will enhance your visit to Toronto.

In a much different but related activity, we took a Hop-On, Hop Off bus tour that started at Dundas Square, the epicentre of Toronto’s pop culture. Having lived in Toronto for nearly ten years, we were pleasantly surprised at how much we learned about the city as the bus made its way up Yonge Street, through trendy and expensive Yorkville and on towards Casa Loma, and back along Bloor Street.

The Distillery District and Cluny Bistro

During the 19th Century, The Gooderham Worts Distillery grew to be the largest distillery in the world. By the late 20th Century, the massive brick, stone and timber buildings were silent and mostly empty. A group of talented developers saw potential in those then-decrepit buildings, and starting in 2003, they began the process of restoring the structures, and re-purposing them to become one of Canada’s leading centres for artists, artisans, entrepreneurs and business people to work together. It’s become a major tourist attraction and subsequently – a popular restaurant destination. 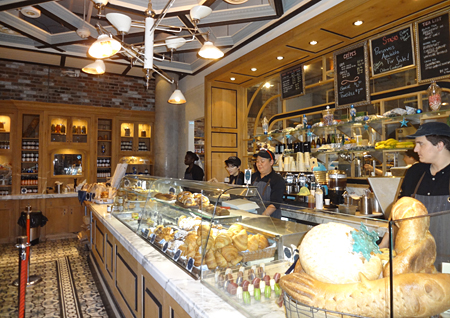 We visited Cluny Bistro for a Saturday brunch, and were impressed by the bistro’s size, decor and fine food. Inasmuch as Cluny Bistro serves excellent cuisine, dining there is an event. The vision of John Berman and Matt Rosenblatt, the 150 seat bistro is a cross between a Paris bistro and a chic urbane place-to-be in New York’s Soho district. Wood is used extensively in the decor, and it took nine months for it to be milled and prepared for installation. There are two private dining rooms of 48 and 32 seats that can be combined for a large 80 place private dining room.

Manager Andrew Thisby took us on a tour, beginning with the main entrance where the boulangerie and pastry shop is located. All the bread, rolls and pastries are made fresh daily. Super chef Chris Kwok arrives at 2am to supervise the day’s baking. Adjacent to the bakery is an airy Parisian-style bar with a capacity for 50 people. Nearby condos and the popular Distillery District seem to provide enough hungry people to keep the restaurant nicely active. 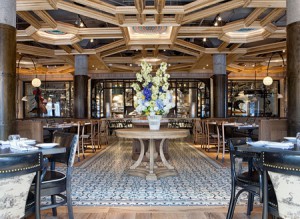 There is unique bread station where the servers themselves cut bread and bring it to your table. A massive wine vault fills and entire wall from floor to ceiling. There’s an oyster bar, which doubles as a lobster serving station in the evening. Our impression is that Cluny Bistro is clearly the preferred brunch location for area residents. The food was excellent, served in generous portions and the servers were friendly and efficient. Next time – we’ll go for dinner.

In the February issue, we’ll highlight some of the musicals that will be coming to the vibrant Toronto theatre scene, including the The Sound of Music this coming June and story of song writer Carol King, titled, Beautiful: The Carol King Musical this summer.