“It looks like you guys might be on your way to a Stanley Cup parade”, laughed (Lawrence) Gowan recently on the phone with The Montrealer from his home in Toronto. The legendary Canadian rocker who took over as lead-singer of equally legendary prog-rock band Styx over 20 years ago was trying to console me after informing me that Styx would not be able to perform in Montreal until early next year when a U.S. tour that was about to kick-off in St. Augustine, Florida winds down.

Styx will be touring the States in support of their new album Crash Of The Crown which came out in June on Alpha Dog 2T Records.

Gowan seemed disappointed that Montrealers will most probably have to wait until 2022 to see one of their all-time favourite progressive rock groups seeing as that the city has always been “prog-rock central”.

He did however share that he was as equally excited about the Habs’ play-off run as Montrealers were, even though the Canadiens beat out his beloved Leafs in the first round.

The Scottish born, Toronto raised singer/pianist rubbed shoulders with the culture of the Habs way before he became a pop star in Canada and decades before he replaced Dennis De Young as lead-singer of Chicago’s Styx.

Way back in the mid 70’s Gowan sang and played keyboards in Rhinegold, a Toronto outfit that was the early training ground for his popish prog-rock style. 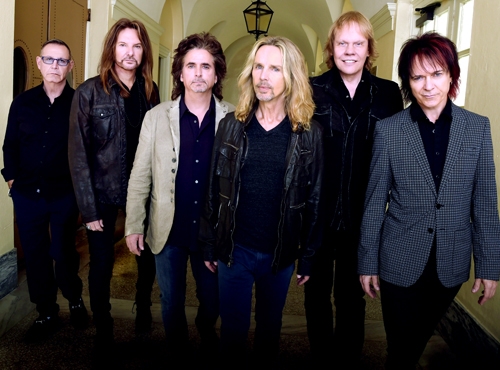 Styx have released a new album that is fresh and energetic
Photo: Rick Diamond

One of the band’s favourite venues in Montreal was The Moustache on Closse Street, across from The Montreal Forum. “The first time we were loading into The Moustache in 1977 and it was February and freezing. While loading our gear into the club, we met Jean Beliveau in the parking lot.” A bit of a prophetic exchange took place between Beliveau and Gowan that night. “The best part of the story was as I shook his hand and he said I might come over to see us, I said don’t worry because I’ll be playing The Forum in a few years and you’ll see us then! About seven and a half years later, I played at The Montreal Forum and when I went in, he was the president of the team. I saw him and went up to him and said I met you in the parking lot across the street and I told you we’d get to play here and he said ‘Congratulations!”

Gowan did indeed play The Forum and many large venues across the country when his 1985 sophomore album Strange Animal went ballistic on the strength of hit songs like; A Criminal Mind, Cosmetics and the unforgettable title track!

The album allowed him to work with musicians he had long admired. On a trip to Scotland and Ireland to retrace his heritage, he met British producer David Tickle, known for his work with Joe Cocker, Split Enz and 4 Non-Blondes amongst others. Tickle arranged for Gowan to be able to play with musicians from Peter Gabriel’s band on the album. Tony Levin, David Rhodes and Jerry Marotta all played on the album that was recorded at Ringo Starr’s studio. Cosmetics was chosen as the album’s first single because Starr liked to dance to the track in his kitchen while the song was being recorded in his home studio!

Much Music played an integral role in Gowan’s solo career. His music was able to be instantly transmitted into the homes of young music fans who ordinarily would not be intrigued by progressive tinged pop music, including hip-hop fans.

Canadian Hip-Hop Godfather, Maestro Fresh Wes would cover A Criminal Mind in 2005, with Gowan appearing in the video. The two would perform the song together at The Canadian Urban Music awards the following year, with a room full of hip-hop fans singing along to the chorus.

After winning a couple of Junos for the Strange Animal album, he followed that up with 1987’s Great Dirty World which produced another big hit single Moonlight Desires and the scorching rocker Awake The Giant.

Gowan would release 3 more studio albums between 1990 and 1995 as well as 2 live albums including ‘97’s Gowan Au Quebec.

Then came Styx, believe it or not with another Montreal twist.

“In 1997, when the new Bell Centre (then The Molson Centre) opened, Montreal concert impresario Donald K. Donald called me about 3 weeks before I was about to do a show in Montreal that he was promoting and said; ‘I don’t want you to do that show now, I want you to open for Styx.’ I remember thinking; ‘Well Donald I haven’t opened for anybody in 14 years.’ Donald said ‘Yeah but this is the new building. You played the old Montreal Forum, but this is the new one. You gotta do this show.’ So I said sure.”

“I had never seen Styx live and I loved their show. They really liked what I had to offer because they heard the audience singing along with all these songs (Gowan’s 80’s hits) and it was a pretty magical night. So funny enough, when I saw their show I thought that if I was ever to be in a band… I’d like to be this one. Just a weird thought and said it to two of the people I was with that night. We kind of chuckled and never thought about it anymore.”

“The following year I was playing in England with the BBC Orchestra. I had an original piece called “Healing Waters” and it was used at the concert for the opening of Princess Diana’s memorial at her home in Norfolk, England. Duran Duran were on that show and Sir Cliff Richard and Todd Sucherman, the drummer from Styx was on that show. (Knight Rider actor) David Hasselhoff, who had promoted a lot of Diana’s charities put a band together for that show, so Todd saw me there. A few months later, I walked into (Styx guitarist) Tommy Shaw’s house and Todd’s there, and he remembers that we had just seen each other in England, after seeing each other at that Montreal show the year before.”

Gowan would replace long-time Styx singer Dennis De Young (who would pursue a solo career) as the band’s new lead-singer in 1999. The first Styx album Gowan would appear on would be 2003’s “Cyclorama” followed by 2005’s “Big Band Theory” and 2017’s “The Mission”. 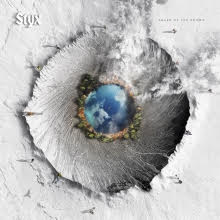 Released in May, Crash of the Crown is selling very well

Styx’s new album sounds exciting, fresh and intense like they were a brand-new young band looking to find their place in the industry.

When asked how Styx manages to stay hungry creatively and create exciting new music, he said “the lifeline of a band is making new music. As our sound-check jams kept getting more interesting, the next thing you know, you got this body or work. We hit a creative streak. We had put the whole notion of making new records on the back burner 10 years ago. We’d do 1 or 2 singles a year, but we were touring so incessantly. We were playing over a hundred shows a year and the music industry had shifted entirely to where it would make more sense for a band with the legacy of Styx to keep playing live around the world – so we did that.”

“When we had a few breaks, Tommy Shaw began working with Will Evankovich who produced (2017’s) The Mission album. He became a co-writer and not having to tour with us around the clock, it gave him some time to take the ideas and begin to formulate them into cohesive bits. Then we realized that we’re about half-way through making a new album. Let’s keep going. Everyone liked it. It just kind of rolled on from there. Suddenly that whole boulder starts rolling downhill and it gets a whole lot easier to ride it”.

Listening to the album’s first single and title track from Crash Of The Crown with it’s jam-like qualities, alternating time signatures, blistering guitars, lush keyboards and breath-taking vocals, it’s clear that Styx is back… or maybe they never left…