Visit Paris, in the heart of downtown Montreal

Until September 6, Grévin Montréal invites you to visit the temporary exhibit Expo Paris Mini. Some of the City of Light’s greatest architectural splendours are featured in miniature, built from small MEGA® building bricks, including the Eiffel Tower, the Champs-Élysées, Notre-Dame de Paris, as well as the Palace of Versailles though it isn’t technically in Paris! It’s the best way to travel while staying in Montreal!

“Parisian masterpieces always delight and enchant us. Coming to discover these spectacular, and among the most famous, monuments of Paris will add a little magic to your summer. Young and old are sure to be dazzled by this miniature, yet gigantic panorama. Ludovica Miniland’s work is impressive and beckons you to travel,” says Kathleen Payette, General Manager,  Grévin Montréal. 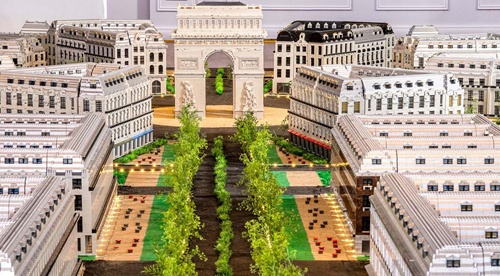 The exhibit was designed, created and produced by Quebec artisans from Ludovica Miniland. “Expo Paris Mini took a year to design, over a half a million MEGA® bricks and thousands of hours of work. Thanks to MEGA® who has supported my creativity for the last 10 years!  I am convinced that visitors will be as impressed as we are by the pieces, and that the exhibit will be an opportunity to learn while having fun,” said Gilles Maheux, exhibit designer.

“Our mission is simple, empower builders to unlock their creative potential with a quality and detailed product. Gilles Maheux is a perfect example of how our bricks can contribute to the creation of magnificent structures, and we hope that his art will also inspire builders of all ages to play and create more”, said Marie-Elise Belle-Isle, Director, Marketing and Communications of the MEGA brand.

Expo Paris Mini was presented in Europe in Lyon, Paris and Frankfurt from March 2018 to January 2019.

To reserve your tickets for Expo Paris Mini at Grévin Montréal, visit grevin-montreal.com   514-788-5211