Editor’s Note: This is the first of a two-part travel feature about Cuba. This month the focus in on Havana, and second part will present tours and hotels in the countryside, and a visit to Cuba’s premier beach holiday destination – Varadero.

What comes to mind when you think CUBA? …Probably sun, beach, turquoise waters, salsa; maybe a Mojito or two.

All of the above, plus almost perfect weather that averages 25 to 29 degrees year-round, are why over a million Canadians visit this island in the West Indies yearly. We’re #1 among foreign guests, and much appreciated.

If you are among those lucky folks who have in the past fled our cold, dreary winters to escape to one of many all-inclusive beach resorts in Varadero, you may be wondering what else there is to see when you go again.

There is a different and vibrant Cuba, becoming more and more accessible to tourists as the Cuban government is making it easier to explore and visit the country. Tourists can stay in Havana and the Cuban countryside to experience the music, art, culture and history.

I visited Cuba for a week this past June, and had the opportunity to be escorted to some lesser known attractions by Cubatur rep “Eddy”. Cubatur is a state run tour company, and Eddy a proud Cuban who delighted in telling us the background and sharing the adventure of every place we visited.  We started in Havana – the capital city of Cuba – this year marking its 500th anniversary.

An Invitation to the Past 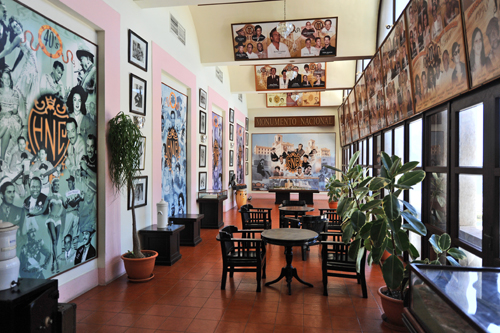 Memorial room of Hotel Nacional, in Havana, displays
pictures of movie stars, musicians and other celebrities who have stayed in the hotel

A visit to the famed “Hotel Nacional” de Cuba, open since 1930 and renowned for its past guests – mostly Hollywood movie stars, politicians, and very rich gangsters – is a must on a visit to Havana. Several well-known names are highlighted on the menu of the grand dining room “Comedor de Aguiar”.  Sir Winston Churchill, for example, had a favourite fish dish. Frank Sinatra, Fred Astaire, Johnny Weissmuller are each remembered by what they liked to eat.

The Hotel Nacional offers a daily tour of its beautiful and well preserved building and grounds – with plenty of stories about high times in the 30’s and 40’s. History buffs will perhaps be most fascinated by the Cuban perspective on the Cuban missile crisis, and JFK’s response to the Russian placement of nuclear missiles on Cuban soil. The hotel was a center of activity and preparation for war, culminating with Cubans (and south Floridians) living on the brink of an atomic holocaust. Americans still think of the crisis as 13 Days (as in the movie so-named). Cubans think in terms of 60 years+ and the continuing economic isolation still in effect today.

We stayed 2 nights in the Hotel Nacional, and enjoyed a dinner show in the Salon 1930 club. The night we were there the music was provided by a current version of the famed Beuna Vista Social Club, and you can count on cabaret style music and dancing every night.

The historic Havana Libra hotel (the former Havana Hilton) is presently being restored to accommodate the growing number of visitors to Havana City.

There are also two new 5-star luxury hotels in Havana – the Kempinski’s Gran Hotel Manzana, and the Iberostar Grand Packard. Both these brands offer upscale accommodation, service and amenities.  As a real bonus after a hot day on the streets of Havana- both hotels feature rooftop infinity pools in which to laze and gaze down at the amazing Havana street life and harbour activity. Or simply enjoy a Pina Colada poolside. 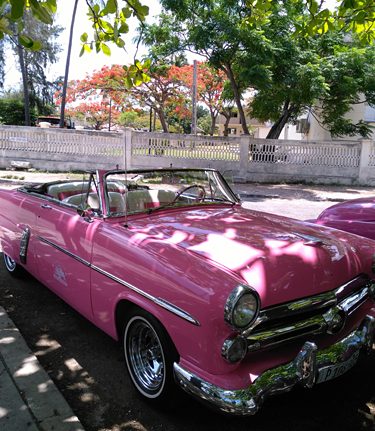 We took a vintage pink convertible like this to the legendary Tropicana nightclub
Photo: Beverley Kerr

Havana exposes many interesting contrasts – narrow cobblestone streets, buildings in Spanish colonial style, shabby doorways and many squares providing shade and a resting place for Cubans and tourists alike. Part of the charm!

Restoration dollars from UNESCO are slowly turning the cityscape back to beautiful. The cranes and scaffolding which are prevalent in old Havana reflect the ongoing renewal of a 500 year old city.

A visit to Havana would not be complete without a stroll along famed Malecón Avenue. This is where Cubans gather day and night to fish, to court, to play and dance to wonderful music. Weekends on the Malecón, just below the site of the Hotel Nacional, are alive with dancing, socializing and singing. August is Carnival month in Cuba, and Malecón Avenue rivals any other Carnival site in the world.

Havana does offer a Hop-On/Hop-Off bus tour. Every tour requires a stop at Revolution Square. Famous for Fidel Castro’s 7 hour speeches, Revolution Square has a capacity for 500,000. Yet the Square attracted over two million people to the Rolling Stones concert, and similar crowds of Cubans have witnessed a Mass, and been blessed by three Popes; most recently by Pope Francis.

Revolution Square is surrounded by government and army buildings and the Presidential Palace. A 100 meter memorial tower and tall statue of Jose Marti, a Cuban national hero, dominate the square. Every school child will sing the national anthem before a statue of Jose Marti before starting their school day.

A Ride in a Vintage American Car is a Must 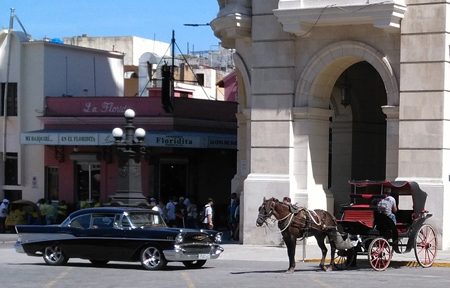 A choice or transportation, a ’57 Chevy of horse drawn carriage outside The Floridita restaurant
Photo: Beverley Kerr

No visit to Havana would be complete without a ride in a pink, purple, or lime green classic 50’s Ford or Cadillac or Chevy. There are even a few Studebakers and Packards on the roads.

We took an “old timer” ride to the La Tropicana Cabaret, a very appropriate way to pretend we were movers and shakers back in the day. The show at the legendary Tropicana is eye candy for adults, with a full orchestra and countless performers in elaborate, colourful, skimpy costumes. The Tropicana is about a 15 minute drive from Old Havana and is situated in lush gardens, another treat for a flower lover like me.

Another taxi ride might take you to a historical fortress like El Morro, or to the Rum Museum to learn about the history and sample one of Cuba’s most distinctive products… We opted for a ride through the leafy district of Miramar; the area where government and foreign Embassy personnel are housed. 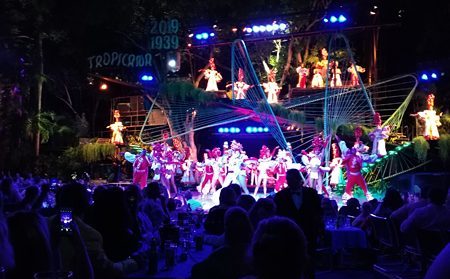 Our guide suggested a visit to La Floridita, complete with bar-side statue of Earnest Hemingway sipping on his favourite cocktail. La Floridita is undoubtedly a tourist bar: the price for a Daiquiri is $6 CUCS – twice what we paid in other watering holes, but with a well-deserved reputation for the best daiquiri ever! La Floridita is located kitty corner from the Gran Packard Hotel downtown.

The cost of a vintage taxi for an hour is $25 CUCS. Less expensive yellow taxis; COCO taxis (that the Cubans call eggheads); horse drawn carriages; and rickshaw type pedal bikes are also readily available. Drivers are happy to tell tourists about their Cuban history, art, music and culture. 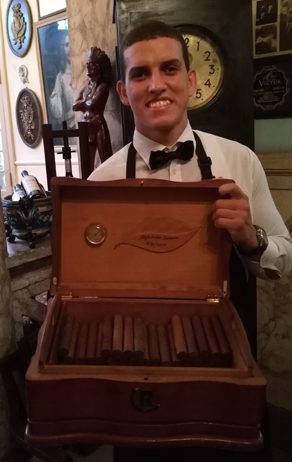 Cubans can now operate an independent small business – most importantly for tourists – a Paladar, (roughly translated to Bistro). These small independent restaurants began to appear in the late 90’s when families opened up their homes and kitchens to supplement the basic income provided by the State. From a modest beginning, the Paladars are often gems; both because they give access to Cuban homes, and also for providing Cuban chefs with the patronage they deserve.

Several excellent Paladars are within a short walking distance from the hotel area of old Havana. These once-upon-a-time family homes have been upgraded and recreated into fine restaurants that offer both delightful ambiance and good to gourmet food.

I have three to recommend: San Cristobal… 469 San Rafael – worth the visit for the amazing memorabilia décor; Café Laurent… Calle M#257 – a penthouse apartment restaurant with incredible terrace views; and La Fontana ….305 3ra Miramar. Reservations are recommended as the venues are small and very popular

I also recommend the Rita & Champagne Bistro in the Kohly neighbourhood, part of Playa municipality. Here I helped the bartender make mojitos! And cooked with the Chef an exceptional meal starting with deep fried cheese filled plantains, black beans and rice, and shredded beef “Vaca Frita”. A very delicious and very Cuban meal. (Special events like cooking classes can be arranged through Leonides for groups of six or more.) 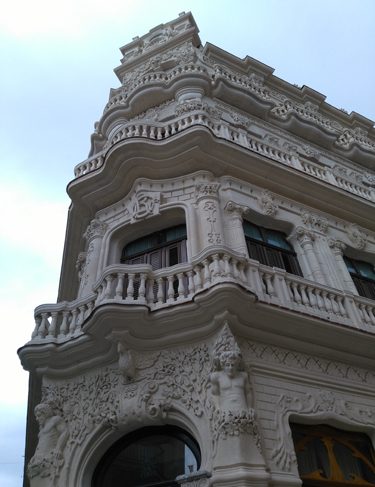 Cuban people were big fans when former President Barak Obama visited the island in a gesture of friendship that sparked hope when he officially reopened the American Embassy. Indeed, modern Cuba is open to American visitors who can get a special visa to fly to Havana direct from Miami or New York depending on their specified interest in education, history, and culture.

Likewise, in response to a more positive USA/Cuba relationship, Cruise Lines added Havana to their Caribbean itineraries. This inspired the beginning of a major relocation and cleanup of the industrial side of the port, currently underway. The goal is to make the Havana port area a future welcoming destination for cruise travelers to walk off their ships and explore this fascinating city.

This July, a modern train is scheduled to begin a fast service from Havana to Santiago de Cuba on the southeast side of the island: another city to visit.

Sadly, during the June week I was in Havana, President Trump renewed the ban on cruise travel to Havana; a major news story around the world, and a more than major disappointment to Cubans and visitors alike.

$$$ – There are two currencies in Cuba – the peso and the Cuban Convertible for tourists – called the CUC. Hotels will change Canadian money, though many Cubans will accept Canadian or American dollars for tips…Currency values change daily; but a Cuban CUC is roughly worth $0.75 Canadian.

ATMs – They are there; but in Havana there are often line-ups. Visa and Mastercard can be iffy away from the hotels. American Express is NOT accepted.

Bargaining – Cubans do not normally bargain, as prices for taxis, etc., are government imposed. My tip is to be clear, before you take a ride, regarding stops and rental time.

Tips – Tips are voluntary, but not surprisingly, everyone seems happy to accept a tip…10% is standard. Remember you need to tip bathroom attendants 10 to 20 cents to access toilet paper!

A Caution – The sun in Cuba is one of many reasons why we Canadians love the island. But heat stroke is not fun. Drink lots of water, lemonade, sodas to stay well-hydrated throughout the day. 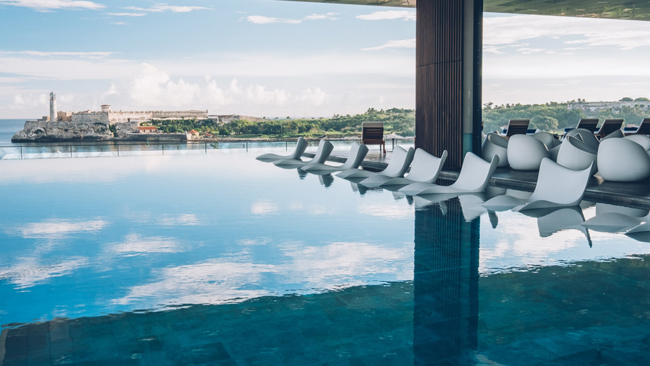