At 5:30 am on January 11, 2021, Sean Henry signed on as the new host of Daybreak, CBC Radio’s flagship morning radio broadcast. While only in his 40s, Sean is a veteran of CBC, having served the national network in for seven years in Windsor before coming to Montreal in 2012. Most recently, Sean was the highly telegenic anchor for the weekend television news. During our conversation, I learned that Sean is enthusiastic about seeking new challenges; both professionally and in his leisure pursuits. Mike Finnerty, Sean’s predecessor at Daybreak suggested that he apply for the prestigious position. “At first I thought it wasn’t for me – but then came to realize that it was a good opportunity. I applied and I’m delighted to have this role.” 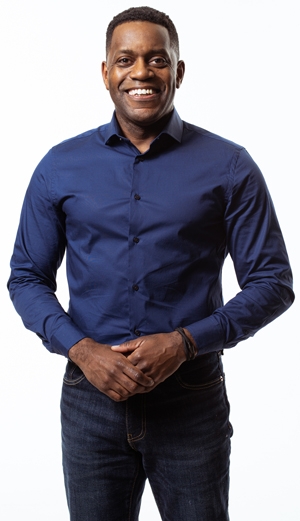 Born in Cote-des-Neiges and raised in LaSalle, Sean Henry is the second of four children in a close-knit family. “I have a brother and two sisters, and except for a sister on Edmonton, we’re all here in Montreal.” Sean now lives near the CBC studios in the East End, but visits his parents in LaSalle every week. While attending Concordia’s Journalism School, he lived in Little Burgundy.

“After I graduated, it took me two years to find a full time job, so I had to have a few sources of part-time income to make ends meet. In the style of Britain’s Channel One, I did a 10-minute show for the Youth News Network that was broadcast in high schools.  I also wrote a column titled Doctors In The News for a magazine called Doctors Review.” Sean also worked part-time in a call centre for National Bank, helping to answer customer questions.

After two years of sending applications all across Canada, Global TV offered Sean a full time position as a researcher and reporter in Quebec City. “I spent a lot of time covering stories in the courthouse. In addition to news stories in Quebec City, I also travelled to Chicoutimi and other towns and cities in the Saguenay Lac-St-Jean area for three years. The region has the consequences of constant unemployment, and I covered the closing of the Chicoutimi Walmart when the staff voted to unionize. I was asked to cover two sessions of the National Assembly – and that was a great learning experience.”

During his time in Quebec City, Sean covered a story about a circus school that was facing financial difficulty. The school had been using a de-consecrated church, and the city wanted to start taxing the building and property, since it was no longer functioning as a church. Sean accepted an invitation to try working out on the flying trapeze. “After the first time up – I was hooked! I said. ‘If you guys can stay open, I’m going to take lessons’. They did and I did.”

CBC posts job opportunities; and in 2005 Sean saw an opening in Windsor, Ontario. “CBC has hiring board committees, and applicants meet with the committee. At first I was a bit intimidated, but my interview went well. I picked Windsor, and they gave me a month to move from Quebec City, find a place to live and get settled. The city is small enough that I could do three or four apartment searches in a day.”

Right from the start, Sean was pleasantly surprised with the kindness he experienced. “People in Windsor are soooo nice!” He goes on to explain; “I had an appointment with a couple to rent their condo. The main floor of the building had some businesses, including a bar. I explained to the bar owner why I was waiting, and he offered me a beer. Soon, other patrons were offering names of doctors, dentists, nearby gyms and other services I’d need as a new person in town. I met the couple, liked their condo and signed the lease right way. That kindness lasted for the entire seven years that I was in Windsor. By contrast, I lived in Quebec City and didn’t know any of my neighbours. In Windsor I became a part of the community.”

While Windsor didn’t have a trapeze school, Sean found a school across the border in Detroit, and he continued on taking courses for the rest of his time in Windsor.

While in Windsor, Sean regularly anchored television and radio news broadcasts. He took on assignments as a court reporter and video-journalist. “After, seven years, the Managing Editor in Windsor told me that part of her goal was to get me into a larger market. I was really happy where I was with my job and the quality of my life, but agreed to keep an open mind. She found me some fill-in work here in Montreal in August. I guess the committee here liked what they saw, and by November 2012 I was back here in Montreal.”

Sean was a regular host of the weekend evening news, as well as substituting for radio hosts as needed. “You have goals as to where to want to be, and I was happy with my progress.” The increased visibility on television brought public recognition. “You don’t think that people will start to recognize you – but it happens.” 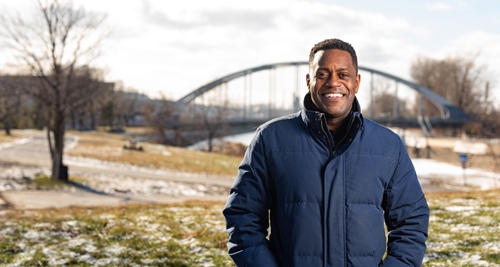 Sean had lived in several areas of the city, and is a
proud Montrealer

“As the News Anchor, I started learning to become a leader; making editorial decisions. People in my position have to decide ‘What is our best course of action here’. When we don’t have the answer – it’s time to call the Executive Producer.”

Sean cites an example. “Four years ago, I was anchoring on the Sunday night news when the mosque shooting took place in Quebec City. I sent out an email in all caps saying; ‘ANYBODY WHO SEES THIS CALL ME NOW!’ We started getting phone calls from radio reporters in Quebec City, and people here started coming into the studio.” Sean continues; “You take a deep breath, keep it simple and stick to the script that you’ve just written. I had a chill that evening when I realized what was going on.”

Sean had a similar occurrence in January 2020 when the Iranian military shot down a passenger plane shortly after take-off. “I was on the air and Iran was denying their involvement – when suddenly they took responsibility. While another item was running, I told the producer in the control room to leave a space and that I’d write two sentences about Iran taking responsibility. By the time I came back on screen live – my sentences were scrolling across the bottom of television screens all over Montreal.”

Sean brings a lot of this ‘live’ on-air experience to his new role as host of Daybreak. “One advantage of a three hour radio program is that we have more time to delve into a topic, and we can speak with our guests for a longer time. We’re making a few changes to the program, beginning with the first half hour from 5:30 to 6am. We’ve dropped the press review and there’s a little more conversation between us in the studio, plus we’re playing some music.”

“Montreal has many different neighbourhoods, and we want to explore them and share them with our listeners. By doing this, we hope to bring more listeners as they see themselves reflected in parts of Daybreak.   And of course still we’ll have our traffic reports and sports coverage. It’s a challenge to hit all of our targets.”

Having listened to Sean on several occasions, he is somehow able to channel the same warmth and good humour that served him so well on television into his new role on radio. He’s confident and self-assured; and makes sure to bring his on-air colleagues into the flow of the program’s conversation. He’s invited former PQ leader Jean-Francois Lisée to come on as a political commentator every two weeks.

“Living in the East End, I’ve come to realize that there are a lot of Anglos in the area. When we did a pre-Christmas feature on shopping, I sent a reporter to Les Galleries D’Anjou and she was surprised at how many Anglos she encountered and how quickly she was able to get her interviews completed.”

Daybreak is a new adventure for the relatively young CBC ‘veteran’ – and he’s already bringing his irrepressible enthusiasm to the role. Sean Henry can be heard weekday mornings on CBC Radio at 88.5 FM from 5:30 to 8:30 am. 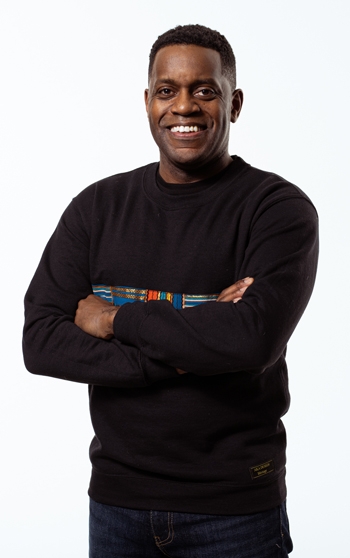 “I was not an athletic kid, and I was always the last one picked when we were making teams. In fact – I hated team sports like soccer and basketball when I was young. Perhaps that’s why I was attracted to the circus flying trapeze and later, Brazilian Jiu Jitsu.”

Once back in Montreal, flying trapeze lessons were difficult to schedule because of his four day rotation. He tried a session of Brazilian Jiu Jitsu, easier to accommodate into his new schedule. “I tried it, and did it ever hurt! I was sore for days afterwards, but I enjoyed it. With classes running at different times during the day, I was able to attend regularly despite my changing work schedule.”

“I started with my white belt, then blue, purple and onto my brown belt. The next step would be my black belt – which was a whole lot more involved. I started to think ‘Oh boy – this is a big commitment!’ “Pursuing my black belt and the teaching that it involved took me out of my comfort zone. I had a core group of people that I trained with, staying at the facility in St. Henri. Partly because of this, I became the most senior student on the mat, although I still had an instructor. I earned my Black Belt in December 2019.”

It was while he was training in the circus school that Sean was encouraged to take up ballet. “Part of the reason for ballet is to smooth out the contours of your body so that you have a more supple appearance on the trapeze. Ballet may look easy – but it’s not.”

“About three years ago I made the decision to focus on Jiu Jitsu and leave the circus behind. I discovered that ballet and Jiu Jitsu are complementary, and so I’ve kept up the ballet.”